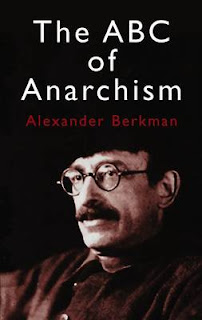 First published in the United States, in 1929, under the title What is Communist Anarchism?, this slightly shortened version has been reprinted 12 times by Freedom Press. The present edition also reprints an introductory biography of Berkman, originally written by this writer in 1970 for the fifth edition.

Many of the words and phrases in the ABC of Anarchism were dated thirty years ago, and are even more so now. Nevertheless, it is still one of the best introductions to the ideas of anarchism, written from the communist-anarchist viewpoint. Berkman's knowledge of economics in general, and Marxist economics in particular, is somewhat shaky, although he has no time for capitalism and the profit system, unlike some anarchists such as individualists and mutualists. Like Marxists, Berkman argues that “there is a continuous warfare between capital and labour”. Again, as with other anarchists, he claims that communist-anarchists “are at one on the basic principle of abolishing government”. He sees government, rather than private-property society that needs and perpetuates government and the coercive state, as the main cause of humanity's problems. Like his companion, Emma Goldman, Berkman was not always consistent regarding governments. On their return to Russia in 1919, they were quite sympathetic towards the Bolsheviks and the Soviet government, but soon criticised Lenin and Trotsky for jailing and executing anarchists, Mensheviks and Social Revolutionaries.

As a communist-anarchist, Berkman advocates a system without commodity-production or any “price system”, wages or payment of money. “This, he says, “logically leads to ownership in common and to joint use. Which is a sensible, just, and equitable system, and is known as communism”. And “work will become a pleasure instead of the deadening drudgery it is today”. His views are similar to those of William Morris in as far as, in communism, people will no longer be employed in useless toil, but will be appreciated according to their willingness to be socially useful. People will live in freedom and equality.

How will such a society come about?, asks Berkman.

To him, the idea is the thing. People must want fundamental change. They must want a revolutionary change before they can achieve a social revolution. And they must prepare for a social revolution. Unlike some anarchists, Berkman does not put much faith in spontaneous uprisings, although he does not reject them on principle. Indeed, he says “we know that revolution begins with street disturbances and outbreaks; it is the initial phase which involves force and violence”. Such a phase is of short duration. According to Berkman, “the social revolution can take place only by means of the general strike”. The general strike is the revolution. (All emphasis in the original). And such a strike can only be carried out by workers organised in labour, or industrial, unions. In his last chapter Berkman assumes that such a revolution would have to be defended by “armed force” if necessary .

This, very briefly, is Alexander Berkman's case for anarchist-communism and revolution. Is it desirable, and would it work? The answer is “yes” and “no”. The Socialist Party advocates and is organised for the establishment of a world-wide system of production solely for use and the abolition of the wages system; such a society would, of necessity, replace government over people by democratic administration of things. Unlike Berkman and the anarchist-communists, however, socialists claim that such actions as insurrection and a general strike by workers would not, and could not, bring about a socialist society. In our view (but not held by this writer 30 years ago!), the working class must organise consciously and politically first, for the conquest of the powers of government, before it can convert private property in the means of production into common property.
Nevertheless, the ABC of Anarchism by Alexander Berkman should be read by all those interested in what anarchists in general, and anarchist-communists in particular, stand for.
Peter E. Newell
Posted by Imposs1904 at 11:54 AM