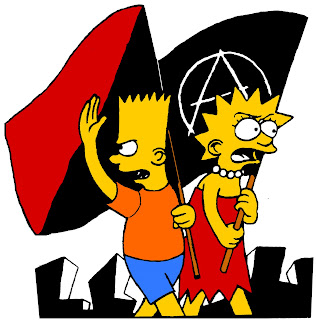 To-day is the anniversary of the death of the anarcho-communist Alexander Berkman , who died this day in 1936 from suicide .
A review of his book ABC of Anarchism can be found here
As a communist-anarchist, Berkman advocates a system without commodity-production or any “price system”, wages or payment of money. “This”, he says, “logically leads to ownership in common and to joint use. Which is a sensible, just, and equitable system, and is known as communism”. And “work will become a pleasure instead of the deadening drudgery it is today”. His views are similar to those of William Morris in as far as, in communism, people will no longer be employed in useless toil, but will be appreciated according to their willingness to be socially useful. People will live in freedom and equality.
Anarcho-communists, as their name suggests, are anarchists who are communists in the sense of standing for a society based on common ownership where people would produce goods and services to be taken and used without buying and selling and in accordance with the principle “from each according to their ability, to each according to their needs”. In other words, they stood more or less for what we call Socialism.
According to Berkman, “the social revolution can take place only by means of the general strike ...It is most important that we realize that the General Strike is the only possibility of social revolution. In the past the General Strike has been propagated in various countries without sufficient emphasis that its real meaning is revolution, that it is the only practical way to it. It is time for us to learn this, and when we do so the social revolution will cease to be a vague, unknown quantity. It will become an actuality, a definite method and aim, a program whose first step is the taking over of the industries by organized labour.” - The general strike is the revolution.
Unlike Berkman and the anarchist-communists , the SPGB claim that such actions as a general strike by workers would not, and could not, bring about a socialist society. In our view the working class must organise consciously and politically first, for the conquest of the powers of government, before it can convert private property in the means of production into common property. Our reasoning goes like this. We want the useful majority in society (workers of all kinds) to take over and run the means of production in the interest of all. However, at the moment these are in the hands of a minority of the population whose ownership and control of them is backed up and enforced by the State . The State stands as an obstacle between the useful majority and the means of production because it is at present controlled by the minority owning class. They control the state, not by some conspiracy, but with the consent or acquiescence of the majority of the population, a consent which expresses itself in everyday attitudes towards rich people, leaders, nationalism, money and, at election times, in voting for parties which support class ownership. In fact it is such majority support expressed through elections that gives their control of the state legitimacy. In other words, the minority rule with the assent of the majority, which gives them political control. The first step towards taking over the means of production, therefore, must be to take over control of the state, and the easiest way to do this is via elections. But elections are merely a technique, a method. The most important precondition to taking political control out of the hands of the owning class is that the useful majority are no longer prepared to be ruled and exploited by a minority; they must withdraw their consent to capitalism and class rule - they must want and understand a socialist society of common ownership and democratic control. We simply argue that it is quite possible, and highly desirable, for a large majority to establish socialism without bloodshed. The more violence is involved, the more likely the revolution is to fail outright, or be blown sideways into a new minority dictatorship. Far better, if only to minimise the risk of violence, to organise to win a majority in parliament , not to form a government , of course , but to end capitalism and dismantle the State.
This not a dispute between supporters and opponents of socialism but a discussion amongst people who are agreed that the way forward for humanity lies in the establishment of a world of common ownership, democratic participation and production to meet needs and the question is what is the better way to achieve that .