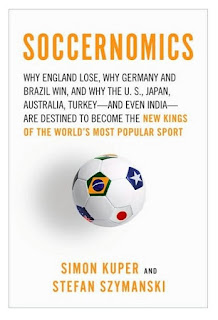 Book Review from the August 2012 issue of the Socialist Standard


A couple of years ago Kuper (who is a writer on the Financial Times Weekend Magazine) and Szymanski (a sports economist) wrote an eye-catching book about soccer called Why England Lose. This is the expanded and updated version under a new title, and it proves a thought-provoking read. It looks at the economics of individual football clubs and the soccer industry as a whole and goes on to use statistical approaches to deconstruct and explain fan loyalty, racism in football, and why some clubs and countries appear to gain a competitive advantage over others.

One of the book’s key findings is that, contrary to the assumptions of many, clubs that pay large transfer fees don’t necessarily buy success. Indeed, in most cases they only succeed in racking up debts. (Arguably the one recent exception to this has been Manchester City.) Based on an analysis of Premier League and Championship clubs in England over ten years, the authors argue: “It seems that high wages help a club much more than do speculative transfers . . . [over time] the size of their wage bills explained a massive 92 per cent of variation in their league positions”.

Also of interest is the chapter, ‘The Curse of Poverty: Why Poor Countries are Poor at Sport’. The authors construct tables of countries’sporting prowess (not just in football, but in other major sports where there is a genuine global competition, and in athletics too). The key finding is that there is a close correlation between a country’s sporting performance and its position on the UN human development index, which measures life expectancy, literacy, education and living standards.

The authors also analyse the changing nature of modern football fandom and find that increasing numbers of supporters –especially those of the larger clubs –are shopping in the postmodern supermarket.  They turn their attention to whether football fanaticism means suicide rates increase when teams get knocked out of major tournaments. The ‘bread and circuses’argument of Marxists seems to gain some justification because their research demonstrates that perceptions of social cohesion within capitalism increase during major sporting tournaments, especially where the national team is participating, even leading to a noticeable fall in suicide rates. People’s underlying condition or situation in society hasn’t changed, but for a few brief weeks they feel less isolated from the human beings around them. But then, of course, the usual sense of alienation and ennui kicks in again.

One of the author’s key arguments is that just as capitalism more generally relies on knowledge networks and ‘social production’, so do sports like football. Indeed, they contend that the greatest concentration of soccer clubs in advanced industrial capitalism is in Western Europe and it is here that the greatest advances in both fitness and tactics have been developed. This includes the notion –seen most clearly in the Champions League –that the best way to win games is ‘fast passing’based on split-second touch football, rather than dribbling or the long-ball.

There is also a fascinating chapter on the nature of the European teams that win big tournaments, with many of them for a long period in Europe being from smaller provincial cities (Nottingham Forest, Borussia, Monchengladbach, etc). While the authors do seem to exaggerate to make a point on occasion, they go a long way to explain why clubs from large metropolitan areas and capital cities (which often tended to underperform in the past) are now increasingly dominating European competitions. And their predictive powers based on this analysis appear to be good –when this book came out they argued that Chelsea or Arsenal would soon be the first London club ever to win the Champions League. It must have happened before the ink was dry.
DAP
Posted by Imposs1904 at 12:56 PM