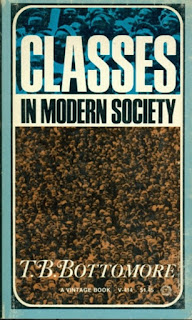 From the June 1966 issue of the Socialist Standard


Classes in Modern Society by T.B. Bottomore is a revised edition of a book which first came out in 1955. It is a book which discusses Marx's theories in a scientific manner and so is worthy of serious consideration. By and large Bottomore gives an acceptable outline of Marx's views, though there are a number of points that we would challenge (as on the questions of violent insurrection, ever worsening crises, and State ownership as the negation, rather than as a form, of private ownership).

Stratification, or as Bottomore puts it, "the division of society into classes or strata, which are ranged in a hierarchy of wealth, prestige and power," has been a feature of most human societies including modern society. Many theories have been put forward to explain this phenomenon and it is no exaggeration to say that discussion has centred round the theories of Scientific Socialism on the question. For Socialists were the first to put forward a theory of class. This theory is a part of historical materialism, the general Socialist theory of history and society. Stratification is explained in terms of property and technology. A thing is the private property of an individual or group if that individual or that group has a right in fact against the other members of the society to use the thing owned.

The socialist theory is not the only theory of class. Other theories have prestige or power as the determinants of class. The dominant school in modern sociology explains class in terms of prestige and style of life. This too is the popular usage of such terms as: working class, middle class and upper class. In the socialist theory the working class is made up of all those who have to get a living by selling their ability to work. In the sociologists' theory the working class is to be explained without reference to the property aspect and are people who enjoy themselves in certain ways. These different uses lead to endless confusion.

Thus Bottomore, although at one point he admits that strictly speaking many of the "middle class" are members of the working class by Marx's definition, somewhat inconsistently supports the view that the socialist theory has been invalidated by the emergence of "a new middle class" made up of "office workers, supervisors, managers, technicians, scientists, and many of those who are employed in providing services of one kind or another." Socialists would not deny that workers in these jobs may have a different style of life from those who work in factories, docks and mines. They would merely deny that this is in any way a valid or relevant criticism of their theory of class.

According to the style-of-life theory of class there is no necessary conflict of interest between the various classes; modern society is not stratified horizontally into antagonistic classes but into a hierarchy of non-conflicting classes.

Other theories of class emphasize the power aspect and see classes delineated in terms of those who give the orders and those who carry them out. This theory is more familiar to Socialists as it has traditionally been that of the Anarchists. Like the socialist theory this poses a necessary conflict between the two classes that make up society. It can be said to be inadequate as it puts the cart before the horse: the power to give orders is a product of economic domination while the necessity to obey orders is a product of economic subjection. But, asks Bottomore, if this is so how can the class society of Russia be explained where the ruling class is economically privileged through its political domination? This, he claims, cannot be "comprehended by the Marxist theory in its most rigorous form." Here Bottomore does raise an interesting point, which illustrates one aspect of the particular development of capitalism in Russia.

It is often claimed that the socialist theory of the growth of class conflict leading to the creation of a classless society has been proved wrong. Can this be said to be so?

Socialists concede right away that on one point at least Marx was wrong: on the question of the timing. Bottomore himself uses this argument in a passage which incidentally makes it quite clear that he sees the idea of a violent insurrection against capitalist rule as central to Marx's theory:

“The rise of the working class in modern societies has been a more protracted affair than Marx supposed, and it has only rarely approached the state of decisive struggle with the bourgeoisie which he expected. In the future a similar gradual development appears most likely, but the end may still be Marx's ideal society, a classless society.”

It can be argued that Marx expected the overthrow of capitalist rule to be violent but in any case this was not central to his theory. Bottomore himself quotes Marx on the possibility of the workers getting power by the vote rather than by insurrection. This idea was developed by later socialist thinkers such as Engels in his 1895 Introduction to The Class Struggles in France, Kautsky in The Dictatorship of the Proletariat, Lucien Laurat in Marxism and Democracy and by the Socialist Party. If this passage were just a rejection of violent insurrection Socialists could not object to it. But it is more than this as it assumes that a classless society is already evolving out of capitalism. Which is an altogether proposition from that which the Socialist Party accepts: that it is the necessary preconditions of a classless society (rather than a classless society itself) that are gradually evolving today.

On the first point there can be no argument. The number of those forced to get a living by selling their ability to work has increased both absolutely and relatively and this process is still going on as professional people and peasants join the ranks of those working for a wage or salary.

Effective democracy is not just a political matter. It is a social condition expressing a certain stage in the development of the working class. For democracy--especially the vote and the free expression of ideas -- is a form of organised working class pressure on the owning class. Before its advent the only means of pressure was unorganised violence, rioting and looting. The vote and the determination to keep it is a means of organising this pressure. Democracy also allows for the further organisation of the working class. When Marx wrote, jobs like politicians, managers and administrators were all filled from the ranks of the wealthy. Now from local councillors and J.Ps to Cabinet Ministers and even Governor Generals such jobs are done by people from the working class. In politics again workers are no longer prepared to follow a wealthy man just because he is wealthy. These are significant changes showing a growth in working class competence. To appreciate their extent we need only compare the modem working class in Britain with what it was a hundred years ago or with the illiterate mass it still is in some parts of the world.

The trade unions too are an expression of working class organisation. These have grown from isolated and weak local unions into influential and permanent national unions. This process is still going on as sections of the working class which were never organised on a large scale before now begin to do so.

It is no exaggeration to claim that today the working class run society from top to bottom. There is no job which they cannot, and do not, do. Socialists then are justified in concluding that with regard to organisation too the trend has been in the expected direction: towards a working class capable of running social affairs without the help of the wealthy.

In the field of ideas there have been changes too. Bottomore refers to the criticism of the socialist theory as it ignored nationalism-"the social bond of nationality has proved more effective in creating a community than has that of class". This may well be true but nationalist ideas are not as strong or as crude as they once were. To rally workers behind them the owners have to do more than beat the drum and wave the flag; they have to produce arguments about humanity, justice, freedom and peace. Degrading religious ideas about the necessity of submission are also declining. On the other hand vague internationalist, egalitarian and humanist ideas are more widespread. Arguments about poverty such as were current in the past --"survival of the fittest", "over-breeding"- are just not acceptable today.

Here again Socialists are justified in seeing in this decline in crude nationalist and religious ideas and in theories openly defending inequality and poverty a step in the direction of the evolution of socialist understanding.

We are not claiming that these processes described by Bottomore as "the rise of the working class," are automatic or go on without resistance. This is by no means the case. Their motive force is in fact the struggle of the working class which Socialists expect will develop into a conscious struggle for Socialism -and we can see in the world as it is today trends towards the development of this movement of the immense majority for a self-administering world community.