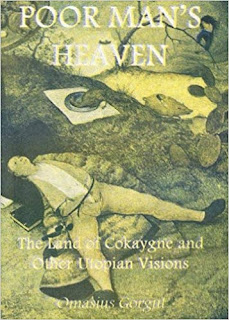 Book Review from the February 2014 issue of the Socialist Standard

Poor Man's Heaven: The Land of Cokaygne and Other Utopian Visions by Omasius Gorgut, Past Tense, 2012. 134 pages.
The Land of Cokaygne was a Middle English poem, the word 'Cokaygne' from Old French 'cocaigne', probably meaning ’cake’. Thomas Aquinas had emphasised hierarchy, private property and class divisions as the natural order of human society. Eden was lost, entry to heaven restricted by Church teaching, therefore Cokaygne was a land of no work, free access, common ownership, peace, happiness, and social justice. Cokaygne was a utopia for the serf offering relief from labour and the struggle for food in a hostile natural world where a bad season might mean absolute famine. Peasants looked to a lost communist golden age.


AL Morton saw Cokaygne as 'arising from lower class self-awareness in terms of class conflict'. Gorgut sees the Peasant's Revolt as 'serfs … becoming aware of their servitude.' John Ball preached 'have your reward both on earth and in heaven. For I say that earth and heaven are not two but one, when Adam delved and Eve span, who was then the gentleman? From the beginning all men were created equal by nature.' Gorgut writes 'a land with no lords, no clergy, no serfs, but equality under God and the king, confirm that many of the poor believed a Return to Eden was achievable in this life.'
Millenarianism was rife but what was coming to an end was not the world but a mode of economic production, i.e. feudalism. With the rise of capitalism moralising enters into the world of Cokaygne reflecting bourgeois protestant morality evident in the Pieter Bruegel the Elder painting The Land of Cockaigne with its portrayal of gluttony and sloth.
German peasant leader Thomas Müntzer attempted to establish Cokaygne declaring 'All property should be held in common’, and in the English Revolution Digger Gerrard Winstanley wrote of the 'the Earth as a Common Treasury'. Gorgut writes of America 'elevating the New World to Cockaygne-like stature' with the community of Merry Mount, Massachusetts where 'settlers, runaway slaves and servants and native Americans lived together communally, brewing excellent beere and dancing around an 60 foot maypole. This attempt to blend old world carnival fun with practical race-mixing and egalitarianism was denounced by puritan pilgrims who feared and hated everything wild and free.'
American hobo songs of the early twentieth century such as The Big Rock Candy Mountain, and Poor Man's Heaven evoked Cokaygne. They still found resonance in the 1980s when The Big Rock Candy Mountain was sung by Tom Waits in the 'hobo' film Ironweed, Rudy Wurlitzer made the film Candy Mountain, and the Indie band The Motorcycle Boy sang their own lyrics to Big Rock Candy Mountain: 'dancing with the working man, looking for the big rock candy mountain.'
Gorgut closes his book with a quote from Hal Rammel: 'Liberated from the everyday, we dream of the world's limitless possibilities, the pleasures of life, and the bountiful earth, one day free for all.'
Steve Clayton
Posted by Imposs1904 at 7:50 AM