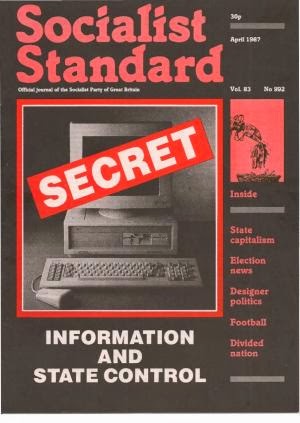 From the April 1987 issue of the Socialist Standard


The "North-South divide" has become part of political rhetoric. The government recently issued figures which showed that of the jobs lost in recent years, 94 per cent were in the north of the country and only 6 per cent in the south, thereby seeming to provide still more evidence of a division between North and South. In fact the "north" now includes almost anywhere outside the south-east of England as the Midlands have also suffered massive job losses. Predictably, the opposition parties have blamed this on the government's mismanagement of the economy. Roy Hattersley, Labour's deputy leader and shadow chancellor, said the government had "scandalously neglected those areas of the economy with which it does not feel any emotional sympathy and deep political interest" (Independent, January 21). He accused them of favouring city and financial interests in the south-east at the expense of manufacturing industry, which is synonymous with the interests of the regions. Edward Heath, the former Tory Prime Minister and leading "wet", said that the North-South divide was moving further south and that the government should pursue a policy of investment for the regions. What was required, he claimed, was a "constructive, co-ordinated development policy for the country as a whole".

The Liberal-SDP Alliance is always keen to talk about divisions in society. At the recent launch of their joint election programme, which was designed to paper over the damaging splits between the two parties, they talked of the need to unite the country through co-operation and partnership. Partnership in government, they argued, is the only way to heal the divisions between North and South. They also urged co-operation between workers and employers. that class division should be forgotten in the interests of a united nation. This is rather like urging someone being mugged to co-operate with the mugger.

Chancellor Nigel Lawson and other Tory ministers denied the existence of any North-South divide. Lawson claimed that the worst of the recession is over, that the economy is growing fast and that over one million new jobs have been created since 1983. But these new jobs have not been spread evenly across the country. On the government's own figures, since 1983 there were 446,000 new jobs in the South-East, but only 135,000 new jobs in Scotland, the North-West, the North-East and Yorkshire and Humberside added together. There has been a five per cent increase in jobs in the financial services to 2.25 million, but manufacturing output is still four cent below its 1979 level. Thatcher has claimed that it is wrong to talk of a North-South divide as parts of the South are doing badly. She has got a point, although it does seem strange that she would want to remind people of the severe deprivation and decay that exists in parts of the South-East, especially areas of inner London.

Manufacturing industry has suffered badly in the current world depression. Many coalmines, steelmills, shipyards and factories have been closed and many others have had severe job losses. Some towns and cities have rates of unemployment in excess of 20 per cent, with some pockets in these areas having much higher levels. This is not a deliberate government policy however - governments can do little to affect the way the economy operates. All wealth under capitalism is produced for sale on the market in the expectation that it will make a profit for the owners. If a product cannot be sold at a profit then production is cut back and workers thrown on the dole. Many industries in the north of the country have been faced with this situation and have acted accordingly. Most of the political criticism seems to want a "fairer" spread of employment prospects across the whole country. Even if this were possible, the implication of this kind of argument is to spread poverty across a wider geographical area. Which ever way capitalism inflicts its suffering on the working class is unacceptable. To argue about its location but ignore its real cause serves only to perpetuate it.

Talk about a North-South divide, or indeed whether workers are employed or unemployed, only covers over the real division in society -  the class division. If you have to work in order to live, if you are a member of the working class, then you are likely to experience a life of shortage, insecurity and relative poverty. Whether you live in London or Liverpool or whether you earn 300 a week or are on the dole will not change this. Clearly existing on a giro means more intense poverty than existing on a wage packet but compared to the life of ease and luxury lived by the capitalist class, these differences are meaningless. As long as workers allow capitalism to continue there will be arguments about who is doing best (or least badly). We will be told that northerners are being hard done by compared to southerners, despite the fact that both endure various levels of poverty. In fact workers themselves will contribute to these artificial divisions - not so long ago there were reports of trouble at a football match when supporters of a London club waved bunches of 10 notes at Liverpool fans and sang songs about them being on the dole.

There always seem to be a plentiful supply of Scottish nationalists who claim that the "English" parliament doesn't care about the Scots, who should get their own parliament and run their own affairs. The Brixton and Tottenham riots happened almost within spitting distance of the House of Commons; clearly, having the "mother of parliaments" on your doorstep is no sure way to peace and prosperity. Not so long ago we were told how lucky we are to live in a developed country like Britain, because if we lived in parts of Africa we'd be starving to death. They were still talking about the North-South divide, but now in global terms. It is cold comfort to people on the dole to be told that they are lucky that they don't live in Ethiopia. The absolute poverty is not the same, but its cause and solution certainly are.

The possibility of finding differences in working class existence are endless. The urgent need is to put an end to the system that creates these artificial divisions. Capitalism is by its nature divisive and competitive, whether it divides people on the grounds of race, sex, nationality or geographical location. Workers have got to transcend these artificial differences and recognise our common interest - that of a degraded, exploited class. Once we recognise our basic class interests then no force on earth can prevent us from acting accordingly, and putting an end to all social division once and for all.
Ian Ratcliffe