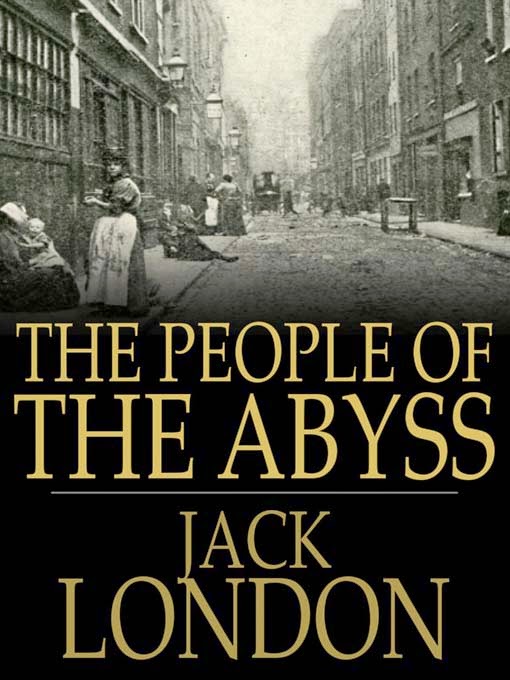 The Scene of the Crime: 1

A series of articles recalling famous books about working-class conditions in particular areas of Britain and viewing those areas today.

In 1902 Jack London, already established as a writer in America, went to stay for seven weeks in the East End of London and write a book about it. He rented a room in a shabby quiet street, bought old clothes and a dirty cap in Petticoat Lane, and walked the streets as a sailor down on his luck. On 22nd August he wrote to his friend Sterling in California: "I've read of misery, and seen a bit, but this beats anything I could even have imagined." In later years he said: "Of all my books, I love most The People of the Abyss. No other book of mine took so much of my young heart and tears as that study of the economic degradation of the poor."

Jack London's East End was Limehouse, Poplar, West and East India Dock Roads, Mile End, Whitechapel, Spitalfields. He slept and ate in the spike, the casual ward ("I must beg forgiveness of my body for the vileness through which I have dragged it, and forgiveness of my stomach for the vileness which I have thrust into it"). He tramped the streets wet to the skin and went to the Salvation Army barracks, where the crowd of paupers were made to stand four hours and listen to speeches and prayers before being given a skinflint breakfast. He went to the hop-fields in Kent, and watched Edward VII's coronation parade in Trafalgar Square.

To what he sat, he added copiously from official statistics, newspaper items, trade unions' and social workers' reports. A census of the alleys in Spitalfields:

In one alley there are ten houses — fifty-one rooms, nearly all about 8 feet by 9 feet — and 254 people . . .  In another court with six houses and twenty-two rooms were 84 people — again 6, 7, 8 and 9 being the number living in one room, in several instances.

A report on the factory workers in "dangerous trades":


The children of the white-lead worker enter the world, as a rule, only to die from the convulsions of lead poisoning — they are either born prematurely, or die within the first year.

No wonder that Jack London wrote to Anna Strunsky: "I am made sick by this human hell-hole called the East End."

Of course he was not the first to write graphically about it. Arthur Morrison's A Child of the Jago, to which London referred, was published in 1896.  Morrison was an East Londoner himself: "the Jago" was the frightful Old Nichol district on the boundary of Bethnal Green and Shoreditch. According to Charles Booth, it had the greatest poverty of all in the East End. Morrison also, incidentally, had no good to say of the Salvation Army's charity — in his book he called General Booth the "Panjandrum of philanthropy, a mummer of the market-place".

But what impressed Jack London most was the parody of human physique in the Abyss. He wrote repeatedly of its "woebegone wretches" — the East Ender with the scrawny arm, the "stunted forms, ugly faces", the young fellow who boasted of being a fine specimen and weighing ten stone:


I was ashamed to tell him that I weighed one hundred and seventy pounds, or over twelve stone, so I contented myself with taking his measure. Poor, misshapen little man!

And the incident with two men who, walking along with him, picked up orange peel, crusts and apple cores from the filthy pavements to eat: "And this, between six and seven o'clock in the evening of August 20, year of our Lord 1902, in the heart of the greatest, wealthiest and most powerful empire the world has ever seen." London, a worshipper of strength, would notice all that specially, but others too observed it. In his book about the 1914-18 war, Disenchantment, C. E. Montague wrote of British troops on the road beside Canadian and Australian ones: "Battalions of colourless, stunted, half-toothless lads from hot, humid Lancashire mills; battalions of slow, staring faces" — against the Dominions' "taller, stronger, handsomer" men.

The People of the Abyss was published in 1903, illustrated with the author's photographs taken in East London. When submitting it to the publishers he described it as a report "from the field of industrial war", and added that it


proposed no remedies and devoted no space to theorizing — it is merely a narrative of things as they are.

However, after consultation with the publishers he made some modifications, and a letter accompanying the revised manuscript said:


I have wholly cut out the reference to the King of England in the Coronation chapter, have softened in a number of places, made it more presentable in many ways, and added a preface and a concluding chapter.

What is the Abyss like now? Some of it is still there. The streets and alleys of Whitechapel were the scene of the Jack the Ripper murders of 1888, and a book on the murders published in 1972 has recent photographs of two places where they were done. But it is all coming down, fast. Limehouse, the  dockside setting of a famous silent film called Broken Blossoms, is now an estate of council flats; Ratcliff Highway, a terrible place, is the same. So is Sidney Street, where the Russian terrorists were besieged and killed in 1911. The docks, now little used, are intended for a massive redevelopment with all kinds of amenities spoken of.

No one would say "hell-hole" now; but "affluent society" would be a misconception too. "Itchy Park," where human derelicts gather, is as appalling as anything Jack London saw. Repeatedly, cases of violent crime come out of the same East End — not by demented individuals but by gangs from those dull, neat flats (the "in" crime at present is stealing lorries for their loads). The shops and stalls along the high roads are crowded with clothes and household things which are showy but cheap and shoddy. You have the feeling in the East End that people are out of the Abyss, but only by the skin of their teeth.

The major factor in the reforms there have been was the 1914-18 war. Lloyd George told the capitalist class they had gone too far: a starved working class had scarcely the blood to shed for them. The point was taken and applied in social welfare, housing and medical services. The effect has resembled the policy of a stingy farmer, accepting the necessity to feed his stock for a profit in the market but watchful that the creatures get not a turnip more than they have to.

In one respect alterations have brought no change. Jack London wrote of the "man-killing" air of the East End:


Sir William Thiselton-Dyer, curator of Kew Gardens, has been studying smoke deposits on vegetation . . . six tons of solid matter, consisting of soot and tarry hydrocarbons, are deposited every week in every quarter of a square mile in and about London . . . Sulphuric acid in the atmosphere is continually being breathed by the London workmen through all the days and nights of their lives.

Today lorries roll in thousands continually along the highways through East London, and the result is called pollution.