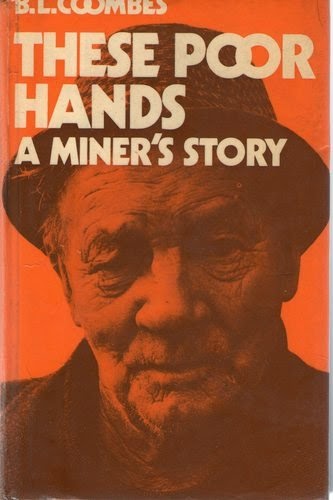 From the January 1975 issue of the Socialist Standard

The Scene of the Crime: 3

These Poor Hands (B. L. Coombes)


Novels and narratives concerned with working-class lives have always been a favourite theme with writers whose interests have lain within the field of realism. Such writers could be placed within two categories; those who observed and wrote mainly "from the outside" and whose writings bear the imprint of "academics" and those who wrote "from the inside" having actual experience of the anguish, despair and poverty of which they speak. The latter, when it emerges, cannot but bear the stamp of authenticity and such a writer was Coombes.

It is often the case that the reader is "manipulated" by the use of sentiment and characterization often larger than life combined with theatrical situations. Not that writers whose roots lay in the working class did not do the same thing. Robert Tressell in his Ragged Trousered Philanthropists and Jack Jones in his novels were masters in the art of the humorous and theatrical. These Poor Hands has its modicum of humour as well as pathos. It is exploited cleverly in the attitude of "Tiger", an old rabbit-catcher, who when handed a religious tract by a travelling evangelist and told that it was "a letter from the Lord" said: "Well, I'll be damned. It's a heck of a time since I heard from him".

Then what can be more pathetic than the picture which describes the processions of labourers and their families with their pitiful possessions piled on wagons, the women and children peeping from underneath oilskin sheets as do animals on their way to market; as such indeed they were, for this was Candlemas time when farm labourers were thrown out and others brought in. Any illusions of a contented country community where people lived close to nature and "watched the turmoil of the outside world" go by, are shattered by such scenes. This situation has continued throughout the years and up to the present time.

In the Wales where Coombes made is home one can see large areas of rural depopulation at the present time. As in the industrial areas, the countryside shows clearly what happens when workers cannot find an employer. The village cottages become "second homes" for holiday-makers, while large areas of fertile ground are given over to caravan sites rather than made to grow food. All this has given room futile activity by Nationalistic groupings who cannot see that the exodus of workers in one direction and the influx of people in another direction is part of the need for employment on one hand, and the need for relaxation from the stress of industrial and city life, on the other. Both these needs can, under the circumstances, only be met by the possession of money.

It is not that the workers of Coombes' youth were ignorant of the source of power that slumbered under the opiates dished out by the church and state. There were some, like his father who when he asked a local landowning Squire to rent him a piece of waste ground was told that it was far too valuable. "Certainly not", said the squire: "It's the most valuable piece of land I've got". "Some months later", says Coombes, "the same gentleman approached my father and say 'I suppose you have heard that I am standing at the next Election? we've been neighbours for some years. Can I count on you for your vote?" "Certainly not", said his father. "It's the most valuable thing I've got".

The miners threw up their leaders, men who in the main were of the blood and guts of the valleys' but such is the nature of leadership that corruption is ever-present. Coombes complains, for example, of the isolation of the miners' leaders from the mass of the men. Their very absence from the heart of the industry, he says, "makes them feel more contented with the conditions of those they represent." This, looking at the situation prevailing in the great trade unions of the present time, is a growing phenomenon. The trade union movement is also forced to co-operate in the business of running industry "for the sake of the country". The spectacle of the gulf between leaders and led is one that has certainly been growing from the times mentioned in Coombes' book. Last month one of Wales's leading poets wrote a satire on the role of leadership in the mining industry. He obviously refers to those who, with a modicum of mining back-ground, trade on the sentiments (and political ignorance) of the miner: -

In the evolution of the British working class one knows that from about the middle of the 18th century the picture begins to change with rapidly increasing impetus. Rural Britain and its field labourers gives way to industrial Britain and its factory workers (though vestiges of the mediaeval system still lingered during the years of Coombes' boyhood, as he shows). One is not surprised to find an increased impetus in literature of a sociological character. Coombes followed in the line of Tressell and others even lesser known, like George Walker and Sykes to whom we owe the tale of "Ben o' Bill's The Luddite" who, together with his comrades "banded together to resist the encroachments and the cruelty of Capital."

Coombes, though a man of very little formal education and an émigré to Wales, found that the worker is the same kind of person everywhere. His book is an autobiography which affords food for thought as to whether, technological changes notwithstanding, the lot of the working class has changed in a fundamental sense. When he speaks of the stoppages and strikes of 1926 we are reminded of the events of last year. When he tells us of the terrific surge for coal from 1893 and the throughout the 1914 war we are reminded of one of the strongest arguments put forward by Keir Hardie and others for nationalization — to ensure that Britain had a secure source of fuel for the Navy and the security of the country. In telling of the life of the miner, this rugged old collier reminds us of those countless "poor hands" which left their bloody marks on the coal. It is up to the reader to find the cause for the tragedy, the suffering and the wasted lives he speaks about.

And so one still meets the Coombes of this world: words penned by fingers broken in the service of capitalism. Thus, literature of the kind we have been discussing serves a purpose, be it a limited one. It should be looked upon as a whetting stone which one would hope leads on to the desire for Socialist knowledge, for it is only by the acquisition of Socialist knowledge that our class can abolish for ever the suppression of one class by another. If the reader of this Journal will but get down to a study of the Declaration of Principles contained herein he might decide that it is time he (or she) began to do something positive to ensure that the writers of the future will have no cause to write the kind of book such as we have been discussing.
W. Brain