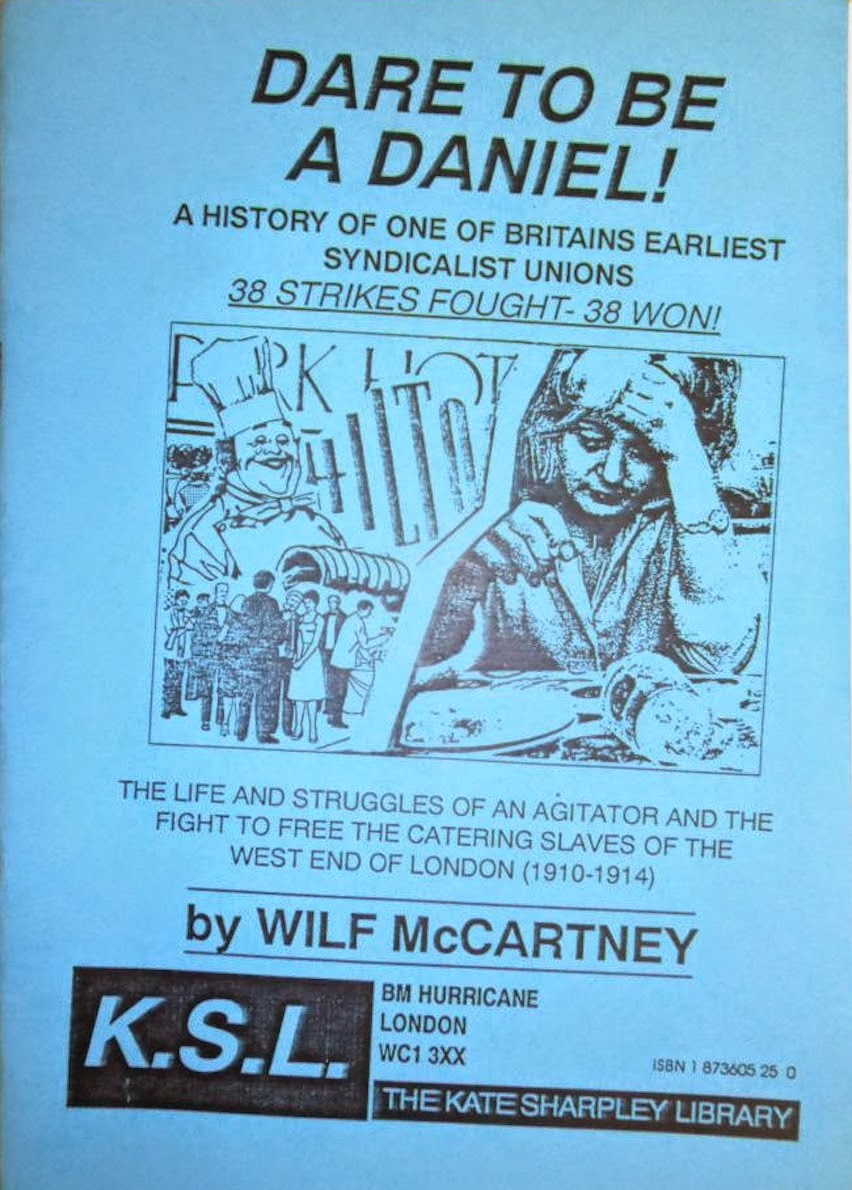 Book Review from the March 1993 issue of the Socialist Standard

The misery of wage slaves exploited in the catering business has always been particularly bad. Although Wilf McCartney's twenty-four page booklet on the subject, written originally in 1942 and published in 1945 with a preface by Orwell, is written in a workmanlike, sometimes poorly-crafted style, it expresses well the plight of the catering workers then and now. Reading it, what is clear is just how little has changed. It has always been a notoriously hard occupation to unionize, based mainly on casual and cheap foreign labour, and McCartney shows how little the official trade unions did to support catering workers. Reports of minor successes in rank-and-file strikes are written up encouragingly, but the hard fact is that catering workers are still being robbed blind by hotel and restaurant bosses despite earlier militancy.

Politically, McCartney's radicalism was of a pretty confused nature. Of relevance here is that he joined the SPGB in its early (not as a founder member) and makes the following critical comments about his experience:


I and others joined this party to learn socialism, but later, along with H. Maslin [surely, H. Martin—editors] and others, we left because of a letter in the Socialist Standard signed "Upton Park". The questioner wanted to know what would be the action of a member of the SPGB elected to Parliament, and the answer was that the Socialist member, backed by the revolutionary votes outside, would consider capitalist measures on their merits! This was quite enough for us.

McCartney is here referring to one of the most historically interesting formative conflicts in this party. The Socialist Party was formed to advocate socialism and nothing but. We have always rejected any compromise with the capitalist system. In 1910 some members, interpreting this principled anti-reformism as a dogmatic opposition to all reforms under capitalism, put their point by writing a letter to the Socialist Standard signed "W. B. of Upton Park". The reply given to them was that a single socialist or a minority of socialists elected to parliament on the basis of whether such measures benefitted or harmed the working class. For example, if measures extending the freedom of socialists to disseminate ideas or reducing election deposits or banning religious control of schooling were on the agenda it is quite possible that a socialist minority would be instructed to vote for them.

The minority within the SPGB formed a Provisional Committee to oppose this policy. Like dogmatic sectarians, inspired by doctrine to dismiss social reality, they went as far as to argue that no reforms have ever helped or could ever benefit the working class. The exchange of documents between the Executive Committee, expressing the position which we maintain today, and the ultra-sectarian Committee, of which McCartney was possibly a member, is highly educative and explains well why our party is opposed to reformism but not to reforms.

Many of our opponents on the Left, embarrassed by our unceasing exposure of their own rotten reformism, have tried to attack the Socialist Party by attacking what is actually the position of the few members of the Provisional Committee who left this party precisely because we do not hold the view in question. McCartney did hold that view, left the SPGB and went on to join the Syndicalist Propaganda League which was soon to disappear into the mists of history. What a pity that a man of such evident passion and union militancy did not stay within the ranks of the one revolutionary party committed to the abolition of the wages system.

Bit naughty of the review to leave the last line off in McCartney's characterisation of his time in the SPGB.

For the record,the last line in the excerpted passage is: "Never having much faith in any politicians we finally broke with that so-called revolutionary party."

Wilf McCartney, a catering worker in his late sixties, was a regular speaker at anarchist meetings when I first attended them in the Thirties. He was also one of the Syndicalist Propaganda League, who joined the ASU but not the Anarchist Federation (as reconstructed in 1940). He took the view, held by many, that what was needed was workers as a whole to organise, not the anarchists as such, or it would become another political party, though nothing angered him more than the customary philistine statement, "the anarchists don't believe in organisation". In 1941 Tom Brown suggested to McCartney he should write his memoirs. McCartney named the pamphlet Dare to be a Daniel! a Nonconformist slogan which appealed to old-time radicals, even atheists.

It was still assumed Freedom Press belonged to the anarchist movement, but by the time it was written, in the following year, this was dubious. The "Freedom Press Group" insisted the book was impossible to publish, giving as an excuse the admittedly scarcely legible script. I typed it out laboriously one weekend I was in London only for it to lie on the table in the flat of two of the group while they thought of fresh excuses why it could not be published.

However, they were friends of George Orwell, who happened to call and, seeing it, was interested enough to ask if he could take it home to read. Next week he came in and said enthusiastically, "If you're going to publish it, I'd like to write a foreword." It was a story of catering conditions in the West End which, he said, exactly concurred with his experience when down-and-out in Paris and London (the difference being that McCartney showed how they fought back).

Though Orwell was not as famous then as now, he was a Noted Intellectual and this altered the situation! They "agreed" it should be published, but George Woodcock, as a literary "expert" wanted it re-written in his brand of Standard Boring English. Brown objected vigorously. However, by the time the booklet was ready for printing, the clique had seized control of the press. Woodcock made several deletions, and changed the title to The French Cooks' Syndicate, with an introduction by Woodcock and a preface by Orwell. McCartney, who did not expect nor receive a penny for the work nor even a free copy, was not consulted.

When he saw it printed, he objected strongly to the patronising introduction by the ultra-Pacifist Noted Intellectual Woodcock and he also resented Orwell writing that his experiences agreed with those of the author, who regarded him, fairly or otherwise, as an "upper class twit playing at workers, who said that the working class stinks".

Wilf's daughter, before she died in 1977, asked Leah Feldman, with whom she was friendly over the years, to get Cienfuegos Press to re-issue the pamphlet, preferably under its original title. They did not have a copy and it was long out of print. Freedom Press wrote to Stuart that it was "their" pamphlet and they were about to reprint and jealously preserved the right to Orwell's few words. Fifteen years later, it still being unpublished, I found a copy, re-set it and had it published by the Kate Sharpley Library.

Some paragraphs had been missed from the Freedom Press edition, but as the manuscript hadn't been restored, I couldn't remember them well enough to reproduce them accurately. These paragraphs were on early anti-fascist activity during the General Strike, when the Imperial Fascisti organised a strike-breaking force, which despite Regular Army protection was routed in the Old Kent Road by dockers with their hammers and catering workers with their carving knives. The heroic scabs took one look, broke ranks and ran, to the hilarity of the squaddies. An amusing paragraph on Victorian schools, with some sarcastic comments on the class prejudices of even the best professional writers, was also missing. These deletions in the first edition were no doubt made by Professor Woodcock in the interests of space, and the omission of his unsolicited five cents worth in the second edition may be considered pure sectarianism on my part.

According to Woodcock 's later distorted recollections of those days, Freedom Press, from which he then loftily detached himself, was offered Animal Farm but turned it down. I find it highly unlikely, especially with Woodcock in control of its literary output and given Marie-Louise Berneri's worship of Noted Intellectuals like her father. Had they published it Orwell would never have been brought to the notice of the literary dictators of opinion. It would have been just another obscure book.

Published by a mainstream publisher and reviewed by accepted critics, it brought Orwell into consideration by the Establishment, and not just the literary one, as an outrageous and original critic of Soviet Russia, and by implication an opponent of the liberal version of State Socialism he had peddled for years and still did.

Orwell was then too ill to enjoy the sensation of being one of the literary figures of our time, but in 1948 1984 put him on the map. As with Animal Farm many people misunderstood it. What he was doing was not predicting a future which never happened, at least within the timescale, but, like Jack London in The Iron Heel, exaggerating current trends in terms of the future. He was essentially a liberal Socialist, disenchanted with the Communist Party and the way socialism was going, but with a love-hate relationship with both, like many of the intellectual left before and since. The Right took it for hate and clasped a reluctant and dying Orwell to its bosom.

I only met Orwell once, in Charlie Lahr's bookshop. I never agreed with Wilf McCartney's description of him, partly because of his Homage to Catalonia, though it was not as good as it was cracked up to be by later generations.