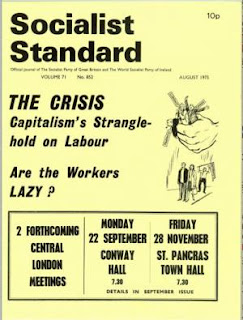 From the August 1975 issue of the Socialist Standard


On July 24th The Sun published the first of 1400 letters it had invited and received on "who is to blame for our present economic crisis". The writer — "A. Worker" — subtracted pensioners, at-schools, servicemen, officials and prisoners from the population and reached his point: "Balance left to do the work, 900,000; people who won't work, 880,000."

The sentiment no doubt went down as well with most of The Sun's readers as the other items (a girl flashing her bosoms and a pop star who owes £750,000 income-tax) on the same page. Proverbially, dogs do not eat other dogs; but workers snarling at one another with allegations of greed and indolence gives perennial pleasure to the capitalist class and those who think like them. Interestingly, the next day the headlines — including The Sun's — were all about unemployment going above a million. Would that have altered "A. Worker's: calculation, had he known? Not at all. One of the features of the nineteen-thirties' depression was frequent assertions by the powerful, and the conviction of the comfortable and ignorant, that the unemployed did not want work.

The answer to the assertion that the characteristic of the working class is to loll about all day is simply to look around. Tower-blocks rise swiftly, motorways spread across the country; the harvest is gathered and transformed into daily bread; post a letter today and it arrives a hundred miles away tomorrow — all done by inert, won't-raise-a-finger people is it? The fact is that capitalism nags everyone to work, from birth. It is the yardstick of school reports: "Works well", "Must work harder", "Steady worker", with "Lazy" the depth of disgrace. Hymns and sermons are full of exhortations to it: "Work, for the night is coming" (whatever that means); "the Lord's work"; "good works". The bee and the ant are held up as ideals to imitate.

Conditioned thus, people eye one another's efforts and comment on public performance like roadsweepers'. "Work fascinates me. I can watch it for hours", said Jerome in Three Men in a Boat. But — and here is the point — the criticism of slothfulness is only of him who has a lot to do and cannot be seen at it all the time. Having the means to do nothing is another matter and leads (or did, until not long ago) to being called a "gentleman" and bowed — and scraped-to. Only the working class can be lazy; the rich twiddle their thumbs or doze in clubs, but that sis how they Carry All the Responsibility. The fairly abrupt disappearance of the "gentleman" bit was due only to changes in the tax laws that made unearned income a disadvantageous category and caused capitalists to arrange nominal occupations ("director") for themselves.

The aspect which is carefully concealed, in fact, is that the working class is condemned to work. Born into the capitalist system, the only way to get a living is to sell one's sole possession: labour-power. No wonder people think about work so much — without it, they may go hungry. "Plenty of work" is an allure, the prospect of work which goes on and on and has lots of hours. And what does the working class get for it? Wages, while the fat and the profits go to the owning class. There was "plenty of work" (a few thousand years' ago) when the Pyramids and the Great Wall of China were under construction, too.

The "people who won't work" of The Sun's thick-skulled  contributor are a myth. It is a tragedy that working people should believe in it. It provides them, of course, with a fear when Socialism is mentioned: what about "the lazy people", the mass of good-for-nothings who would sponge on others' honest efforts? The gullible worker who talks like this never sees that he is repeating what his masters say, and they mean him as well. This is, indeed, a curious habit among proprietors of saying they "built" or "made" or "provided" almost anything. They know, of course, that the workers did it, but the workers are of no account.

It can be said also that for most people work is what they can get,and devoid of the capacity to interest. Part of the definition of work, commonly, is that it is something dull or unpleasant: if (by rare good fortune) one does something agreeable or even enjoyable it is not reckoned to be truly work. The division between work-time and leisure-time is a matter of the hours for which the sale of labour-power is made, but it is also stopping doing tedious things at half-past five and looking for pleasure the day does not contain.

Oh yes, men and women work, lifelong. They have no choice: the non-workers are those who live by exploitation. Socialism will end that, and make work rewarding in every sense. And the first step towards it is to reject the inanities The Sun deals in, and see what the working-class position really is.
Robert Barltrop