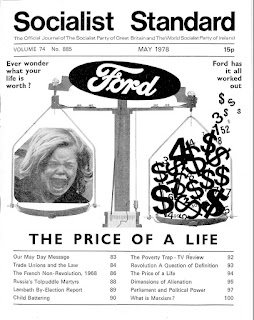 Readers who watched the ITN News at Ten on Friday 14th April saw a film of Tory leader, Margaret Thatcher, walking the streets of Lambeth Central grovelling for a few by-election votes for her party. Suddenly a black girl rushed up to her and thrust a manifesto into her hands. "What's this?" says the vote-catcher, looking confused. "The Socialist Party of Great Britain?". The film stopped abruptly. The newsreader smiled and continued churning out the propaganda. What had happened to Thatcher had gone on throughout Lambeth Central in the weeks leading up to the April 20th by-election. For the first time in their lives thousands of people have been given the chance to consider our political alternative. Seven thousand manifestoes handed out or put through doors; thousands of election bulletins given away; about a thousand Socialist Standards sold; over a hundred posters plastering the area; three loudspeaker vans blasting the constituency with the case for revolution; six well attended public meetings. The workers of Lambeth Central were unable to ignore the impact of such a campaign.

Urban squalor
There are certainly some good reasons for them to give some thought to Socialism. Lambeth Central is a classical example of the kind of urban squalor which is the lot of the working class under a system which puts profits before need. Unemployment, especially severe amongst blacks, is the highest in London. In Brixton alone there are 7,456 unemployed according to the Department of Employment. There are 18,000 constituents on the housing list, which means they are either living in sub-standard houses or are homeless. As you tour the streets of Lambeth Central  derelict houses which the council haven't the money to renovate are in abundance—inhabited slums are even more frequent. After more than forty years of Labour representation in parliament by Marcus Lipton, the problems facing workers in Lambeth Central haven't gone away. No wonder there was a sense of political cynicism expressed by many people as the loudspeaker cars of the professional reformists once again descended upon them like ice cream vans, each offering a variety of flavours, all tasting the same. Many workers were unwilling to consider any political ideas, rejecting politics as being either too difficult to comprehend or else as an indecent game played at their expense. "Whoever you vote for the government wins" said one man. Because of despair with reformism some workers were attracted to the so-called extreme candidates, by which is meant those parties committed to the vigorous implementation of failed Labour and Tory policies.

Hard though some of the parties tried, racism was not raised as a major issue in the campaign. The openly racist National Front is weak in Lambeth Central, an area in which a quarter of the inhabitants are black and where black and white workers have a long tradition of living and working together. Our bulletin on immigration exposed the red herring that coloured immigration causes social problems, pointing out that racism and nationalism foster division amongst the working class.

With eleven candidates in the election, Socialist propaganda was not only up against the traditional parties of capitalism, but a number of parties claiming to be socialist. Excluding Labour, which by now has lost even the pretence of being anything but a boss's party, there were four parties other than the SPGB claiming to stand for socialism: the Socialist Workers Party, Socialist Unity, and Workers Revolutionary Party and the South London People's Front. Each claimed to be more revolutionary than the rest. What were they standing for? Common ownership of the means of wealth production and distribution? An end to class society? "Yes, well it's a good idea in theory", they all said, but in the "meantime" it was "pragmatic" to offer the workers a list of sterile reforms: the WRP manifesto promised that if Corin Redgrave was elected he'd smash NATO and restore wage differentials; Socialist Unity promised, amongst other "revolutionary" measures that would make your eyes pop out, that they would end spectacle charges. The ruling class must be trembling at the very thought. The WRP manifesto claimed that Corin Redgrave was standing in the election to show it be a "fraud and a sham". Rather like joining the army to strike a blow for pacifism.

Reformist rhetoric
Party members attended opponents meetings which were used to sell and give away literature. Members comprised a third of the audience to hear Tony Benn talk his way round the last six Labour governments; at the Liberal meeting we suffered Cyril Smith addressing an almost hall; we were prevented by the police from entering a so-called public meeting of the National Front; at the SWP meeting we cringed at the reformist rhetoric of Paul Foot. Large crowds attended our own meetings: workers who were treated as political adults instead of voting fodder.

Socialist Standard prize for the most irrelevant election meeting of the campaign has to go to the one held by the Maoist, South London People's Front, the title of which was "Why there is no inflation in Albania". About as useful as a meeting on why there are no Albanians in Brixton, Prize for the most unreasonable person to be canvassed goes to the man who said, "I'm voting National Front. Hitler did a good job in Germany. I should know, I fought against him in the last war". Prize for the silliest reform goes to the laugh-a-minute WRP who promise, if elected, to "put an end to the commodity market".

As in all elections, the workers of Lambeth Central were faced with a choice: more capitalism or social revolution. We call upon the few workers who cast a vote for Socialism to join the party and build the number of workers who will say YES to revolution at the next election.
Steve Coleman

1978 Lambeth by-election
This by-election, held on 20 April 1978, has come back into the news as a result of the Maoist cult "slavery" case because they (and us and the IMG, SWP, WRP and 6 other candidates, making 11 in all) contested this by-election. We contacted our candidate, Barry McNeeney (who is no longer a member), to see if he remembered the cult candidate. He didn't but sent us some interesting recollections of the election. Here's an extract (the full version will go into our historical archives at Head Office).

It was a snap election, called, campaigned, polled and the result announced within the university Easter vacation.

I was a second-year philosophy mature student under a professor who specialised in dishonest arguments [...] Richard Swinburne went on to become a professor of religion at Oxford University [...]

On the Friday morning of the Socialist Party of Great Britain conference at Conway Hall it was observed from the floor that the party headquarters were in the constituency. "But we have no candidate", the chairman replied. Harry Young asked me, "Do you want to stand, Barry?" "...Yes", I replied.

Harry then proposed  me as the party candidate, somebody else seconded me and the delegates agreed. I was taken away for the parliamentary candidates test. This was conducted at the head office in Clapham High Street. The examiners were Harry Walters, Harry Young and [Ron Cook]. There were a lot of questions about surplus value and the economics of exploitation, the materialist conception of history, the development of society through time and what the working class had to do to effect a socialist revolution through the ballot box.

I steered round such trick question as:

"Can the workers buy back with their wages all of the commodities they produce in a week?" (Short answer: exploitation takes place at the point of production, not consumption.) [....]

We set up a table on the pavement outside head office with literature and posters advertising our candidacy in the by-election and button-holing passers-by -- by telling them if they had read our literature and developed a socialist consciousness, they could vote for a genuine socialist candidate here and now.

"But who is he?" many asked. It was eerie to answer with my name; "We're not asking you to vote for a character, or celebrity, but for a way of reorganising society by democratic agreement", was frequently said.

Ronnie Weidberg had two public address systems with megaphones that could be attached to the roof of a car. We toured many streets in the constituency while I spoke into the microphone. The socialist case reverberated from the tower blocks, in snatches.

Harry Young and I teamed up from door-to-door canvassing. We encountered no hostility. A seventy-five year old and a thirty-two year old talking about a classless, moneyless world community are idealists, at a glance. We shook the loyalty of many die-hard Labour supporters and got invited in for coffee by a few floating voters.

There were a lot of candidates for the election. We met up with the Liberal and her entourage. I asked her to tell me her case. Then put the SPGB case to her, pointing out that "the science of the possible" can be expanded if the majority of people have knowledge and conviction.

We made enough noise to attract media attention. A BBC television crew turned up at head office while we were outside on the pavement. They filmed the bullet-proof window, then pushed the camera in my face, "Right you've got one minute", the director said.

Desperately, I grabbed the nearest passer-by, who happened to be a beautiful, black twenty year old woman. "You're on television. Do you have a vote in this election?" I whispered to her. "Yes", she said, terrified. I put the most charming and winning argument I could to her in a minute, while she smiled at the camera, nodded and answered in monosyllables. When it was over I pressed a copy of the Socialist Standard into her hand and thanked her.

The one-minute recording was screened on BBC six o'clock news, on the day before the election, I think. Afterwards the announcer smiled and shook his head.

I wrote an article for the local Caribbean newspaper recounting this and other experiences with black people over the years. They liked it but would not publish it until the election was over, lest it be seen as an endorsement. I don't know whether they did.