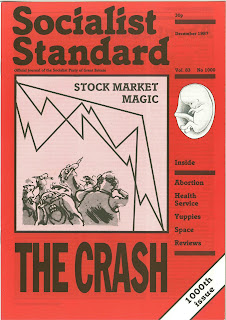 From the December 1987 issue of the Socialist Standard

The "socialist" conference in Chesterfield attracted considerable media attention. Tony Benn called it a gathering of the widest range of socialists since the First World War. 1,800 delegates were at the conference, including members of the SWP, WRP. RCP. Militant and the Labour Party. Convened by people from the Conference of Socialist Economists and the Socialist Society, described by one newspaper as "intellectuals", its aim - that discussion would take place on papers prepared for the conference - was unfulfilled. The reason was largely the determination of Trotskyist groups to use the occasion to state their own position and to indulge in a recruitment drive. The leader column of the Guardian described the conference as "a collection of attitude takers, discredited failures and sectarian anti-Labour activists".

Ron Todd's docker is hardly likely to have been impressed by the petty squabbling and misleading drivel emanating from Chesterfield. Whilst the conference may have fed the already fevered minds of Sun and Daily Express leader writers, this circus had nothing to do with furthering socialism. Ken Livingstone delivered what passed for an intelligent analysis of the crisis in capitalism and its imminent collapse - to be replaced by state capitalism with guess who in charge of it. His stand-up comic routine may have appealed to those who still believe that a socialist revolution occurred in Russia in 1917 but not even a newt would believe in his version of a "new socialist order".

The Guardian report stated, "Notably absent, however, were the Euro-Communists and, of course, the Labour soft left". There was a more notable absence from Chesterfield: The Socialist Party of Great Britain: the only socialist party in this country which has eschewed deluding the working class into believing that capitalism can reformed in their interest. We were absent because we have no common cause with futile reformists, gathered together in earnest discussion of how to re-arrange capitalism while telling the workers that it is socialism.
Posted by Imposs1904 at 4:06 PM

"Ron Todd's docker" is a reference to a famous speech that then TGWU leader, Ron Todd, made in reaction to the political climate of Thatcher's Britain. I couldn't find a clip or an actual excerpt of the speech but it is referenced in Neil Kinnock's leader speech at the Labour Party Conference in Brighton in 1987:
"Ron Todd made the point with deadly accuracy just a couple of months ago when he asked: ‘what do you say to a docker who earns £400 a week, owns his house, a new car, a microwave and a video, as well as a small place near Marbella?’ ‘You do not say,’ said Ron, ‘let me take you out of your misery, brother.’ (Laughter and applause) When he asked that question, Ron Todd was not suggesting that we trail along in the wake of something called popular capitalism - he was facing a fundamental question for our party with admirable candour that I would recommend universally. It is a question which we must all face if we are going to have an effective response to the changes taking place in our society."

There is a news report of the Chesterfield Conference on YouTube at the following link:
https://www.youtube.com/watch?v=jz6DLnFCIYs

The news clip featuring a very young Paul Mason in his Workers Power days and Ralph Milliband, I hasten to add.