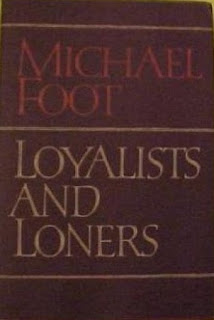 Book Review from the May 1986 issue of the Socialist Standard

Those who were on the left wing of the Labour Party during the Attlee governments of 1945/51 will remember Michael Foot as an heroic but tragically neglected saviour from the rigours of Crippsian austerity. Bevin's Cold War belligerence, Morrison's careerism. If only Foot could be Prime Minister, Foreign Secretary and Chancellor of the Exchequer—preferably all at once—it would herald the dawn of socialism in Britain. The British ruling class would be in open alliance with Stalin, pensioners would be elevated into a new privileged class, Harley Street would be jammed with the proletarian sick. But it could never, wailed the left, happen. Foot was too honest, too radical, too fiery to be allowed into government.

By this time those delusions, usually misnamed idealism, had crusted over Foot had made it into a Labour cabinet, with instruction to buy off the 1973/4 coal strike and end the Three Day Week. In time, with what seemed a spasm of desperation, Labour elected him as their leader, which meant that the doorway of Number Ten was in his sights. What happened during those days of power and influence was that Foot proved to be as tamely conventional as the rest—with the difference that he could rely on his reputation for fiery honesty and radicalism to put over such policies as supporting Thatcher's Falklands war. Faced with an embarrassing, probably a vote-losing conference decision for unilateral nuclear disarmament, he fudged the issue. The orderly administration of British capitalism and the profitable exploitation of its working class were as much a priority for him as for any right-winger, any Tory. In the 1983 general election it was clear that Foot's reputation as an intellectually fastidious, but otherwise dishevelled eccentric was a liability. He cynically submitted himself to the party's image-builders, trying desperately to appear like a man you would gladly buy a second-hand election promise from.

In spite of all this, left wing prejudice ensures that Foot's reputation remains unsullied. He has progressed from radical firebrand to elder, ambitionless statesman; clearly in the tradition of political has-beens, it was time for him to get out a book. Perhaps this was not wise: Loyalists and Loners exposes Foot as an intensely patriotic man, a person who is so confused — and confusing — about capitalism's class society that he writes in these crudely ignorant terms: " . . . for the bulk of the British adult population, the moment which must stand out most proudly in their collective memory was 1940" (written in 1965): " . . . the British people were not going to give in to Hitler and Hitlerism . . . (1983).

This collection of essays, book reviews and other miscellania — which Foot audaciously offers as serious analysis — includes many pieces which deny the author's reputation for tireless affability. Tony Benn's abrupt changes in style and attitudes are described as a deliberate ploy to hijack the Labour leadership (if so it as particularly stupid and short-sighted); for David Owen, "The sweets of office seemed to soften even the harsh Owenite accents"; of poor old George Brown, "Some of his judgements were so topsy-turvy, so much in defiance of the common sense view, that the astonishing fact is how long his other qualities enabled him to survive at all". Another "astonishing fact" might be how Foot excuses his own involvement in a party peopled by such monstrosities. Or why he should attack these tricksters ("I called him [Tony Benn] a liar and he got up and left") while he admires others, such as Bevan and Enoch Powell, who are equally guilty. In fact, Powell is treated with all the nauseating chumminess on which capitalist politicians are so copiously nurtured. Powell had a "passion for truth . . . " he was " . . . stating the case against the nuclear deterrent with a crystal logic no one else could equal . . . " the fact that Powell never became Prime Minister " . . . was a tragedy for Enoch, and a tragedy for the rest of us too".

Politics is not a subject for dilettantes. It is all about the power of the working class to revolutionise a decadent, repressive, murdering social system into history. This vital issue finds no mention in Foot's pretentious exercises in irrelevance. Is this the best this reputedly cultured man can do? For sure, Foot knows about the Socialist Party and he lays claim to understand socialism, as witnessed in his contemptible sneer in Debts of Honour:


I naturally went to Hyde Park to hear the orators, the best of the many free entertainments on offer in the capital. I heard the purest milk of the word flowing, then as now, from the Socialist Party of Great Britain.

Little wonder, with such lack of insight, that Foot is capable of producing so flimsy, unilluminating and boring a book as this.