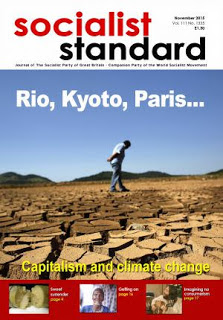 The Voice From The Back Column from the November 2015 issue of the Socialist Standard
Time on their hands
'Have Half a Million Dollars? Here’s a Massive Roger Dubuis Pocket Watch. Roger Dubuis is a brand that's never shy. If you're a fan, you probably use adjectives like bold and pioneering to describe the ornately skeletonised watches that come from the Geneva-based manufacturer. If you're not a fan, florid might seem a less generous description. Whatever your taste though, there's no denying that the new Excalibur Spider Pocket Time Instrument is flat-out insane' (bloomberg.com, 5 October). There are billions of reasons why this is mad. Here are just 600 million of them, the number, in India alone, of people who defecate in the open. Workers of the world wake up. Pull the chain on this system of obscene wealth and abject poverty.

Hajj Hell
Estimates vary as to how many paid the ultimate price and lost their lives in the rush to submit. The feudalistic theocracy of Saudi Arabia said 769 died in the crush, the Associated Press counted at least 1,453 and Iran over 4,700. Whatever the exact number, the history of the hajj, past, present and future, is tragic. Who is to blame? Mohammed? No, even though, unlike Jesus, there is convincing evidence he lived, we cannot really blame a man long dead. The moronic mullahs who failed to give advance warning of the impending deaths? No, because they cannot see the future any more than eBible Fellowship leader Chris McCann who stated the world would pass away on 7 October. But, according to one report, a class element is involved: the two waves of pilgrims converged on a narrow road 'which had been partly closed to allow a VIP Saudi prince to jump the cue [sic] causing people to suffocate or be trampled to death' (dissidentvoice.org, 7 October).

Stephen Hawking boldly goes....socialist?
'If machines produce everything we need, the outcome will depend on how things are distributed. Everyone can enjoy a life of luxurious leisure if the machine-produced wealth is shared, or most people can end up miserably poor if the machine-owners successfully lobby against wealth redistribution. So far, the trend seems to be toward the second option, with technology driving ever-increasing inequality' (huffingtonpost.com, 10 October). Socialists, preferring the first option, are not ashamed to appropriate Healey’s First Law of Holes to remind fellow members of the working class to stop digging. A world of free access and production for use not profit is ours for the taking. Make it so!

Moore nonsense
Meaningful change cannot come about through leaders, chasing reforms or minority action. Michael Moore disagrees: ’it doesn't take a lot; just a few people have got to do something, not a lot of people. No change has ever occurred with the masses doing it. Fewer than 25 percent supported the American Revolution in the Colonies, right? Jesus has 12 guys that fished! ' (cbsnews.com, 2 October). But only the masses can do it! Meanwhile, in the words of William Morris, ‘our business... is the making of socialists, i.e., convincing people that socialism is good for them and is possible. When we have enough people of that way of thinking, they will find out what action is necessary for putting their principles into practice. Until we have that mass of opinion, action for a general change that will benefit the whole people is impossible.'

$mith & We$$on
Moore is in favour of more gun controls. The manufactures are too, as such talk improves sales. 'Renewed calls for tougher gun control laws sent gun stocks surging on Monday as investors expected an increase in gun sales. The value of Smith & Wesson’s shares went up by 7.29% and Sturm, Ruger & Co increased by 2.75%. It was another good day for gun stock investors. Overall this year, the value of Smith & Wesson’s shares has increased by more than 80% and that of Sturm, Ruger increased by more than 60% – making them some of the best-performing stocks of 2015' (Guardian, 5 October).

Clueless capitalist
'Lord Sugar says today's poor have never had it so good, with mobile phones, computers and televisions making a mockery of claims of deprivation' (Daily Telegraph, 4 October). Just 85 capitalists have accumulated as much wealth between them as half the world's total population combined. Yet the 99 percent suffer poverty because they, unlike the capitalists, do not have direct access to the means of production and distribution.