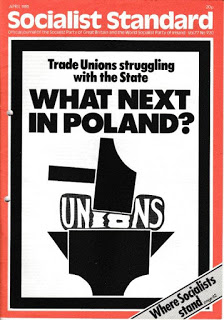 Ah, how Harold Wilson will be missed! Who can rival that calm defusing of the difficult TV question, lighting his pipe and losing the interviewer in a literal and metaphorical smokescreen so that he could get away without answering the question, or with answering one which hadn’t been asked!

Is there another such master of the facile, memorably headline-catching phrase, Like the “white hot technological revolution” which, in the early sixties, was going to bring in the age of boundless prosperity for us all. Like “a week in politics is a long time”, which meant that workers’ memories are peculiarly stunted about capitalism—a defect which its leaders exploit for all it is worth.

Will there be an equal in the art of the bland assurance that all things could be planned into docility by the magic Wilson touch? For nothing, if we are to believe Wilson, ever surprised him; his resignation as Prime Minister had, apparently, nothing to do with the mess of British capitalism under Labour but had been planned years before. Even the announcement of his impending retirement from Parliament has, he says, no bearing on the present split in the Labour Party.

Shall we ever see again such unshakeable audacity? Whenever the breath of scandal passed across him —which happened more often than a politician might hope—Wilson dealt with it by a simple denial. So it was that he wriggled out of a threatened exposure of Labour’s condoning Rhodesian sanctions busting. It was unlucky for him that the recipients of his infamous Resignation Honours exposed themselves so soon as crooks—or at least as the sort of crooks capitalism is liable to punish. But by then it had gone too far.

Yes he will be missed for he was a master politician—which means that he is the master of all the arts of manipulation, cynicism and plain deceit which capitalism’s politics require. And no doubt capitalism will reward him generously for his service.

In the 1945 election Tory newspapers often published the famous photograph of Clement Attlee giving the clenched fist salute at a Republican parade in the Spanish Civil War. This salute, the Tories warned us, meant that Attlee was really a Communist and if he ever became Prime Minister the way would be open for a full blooded revolution which would obliterate the monarchy, the House of Lords, cricket, tea on the lawn and everything else which is dear in the British Way of Life.

Well immediately on their taking power Attlee’s ministers were seen to be visiting the various royal homes and nervous defenders of the British Way of Life might have assumed that they were doing so in order to give the ruling class notice to quit.

Such paranoia would have been blind to the evidence, of which there was plenty, that the position of the British ruling class was being stoutly defended by that Labour government and that ruling class figureheads like the royal family were going about their business in complete assurance of their continued existence.

And now we have been given a glimpse of what actually went on during those visits. True, this glimpse (and it is secondhand at that) comes from the jealous, vindictive pen of Richard Crossman, whose contempt for his fellow politician was palpable (what must he have thought of the workers who voted for them?) but who did not tell lies all the time.

And Crossman has it that Labour ministers—including the austere, foreboding, one-time darling of the left wing Stafford Cripps—made fools of themselves in order to please the royals. Queen Elizabeth, for example, was always liable to be amused by the sight of ministers of the crown goose-stepping in line into a room.

So Attlee’s ministers goose-stepped. And the Queen laughed and perhaps commented on what nice, reassuring, unthreatening ministers she had in this supposedly revolutionary government. When the fun was over, the ministers returned to their labours of trying to control British capitalism while telling the working class that they were building socialism.

These people might well have felt contempt for the workers who with their votes acquiesced in such obscenities. When the workers express their contempt at it all—that is when we shall be making discernible progress.

Come back Ted Heath, all is forgiven. Only by ignoring everyday facts can the Tories pretend that their policy is not in tatters. Thatcher’s defiant assurance to her party’s conference last autumn that “this lady’s not for turning” is becoming ever more embarrassing.

At the 1979 election the Tories claimed that solving the problems of British capitalism was really a simple matter; it had just escaped the attention of former governments, including Tory ones under Prime Ministers like Heath. One essential of the cure was that the governments should not interfere in wage disputes or to save unprofitable businesses. Left to themselves, to sink or swim in capitalism’s market economy, if they survived they would have proved their worth. If they went under well that would also be healthy because it would get rid of an industrial and commercial liability. So in the end we would all be more secure, richer.

Heath’s version of the same policy was that his government would not bale out “lame duck” firms and he too promised that his programme was a blindingly simple and effective remedy. Well it did not work out like that and Heath had to abandon his theories, with firms like Rolls Royce marking his retreat like tombstones.

In fact, the days are long gone when a capitalist class will allow basic industries to expire simply because their books don’t balance. Some industries have to be run at a loss in the overall interests of a national capitalism; thus most advanced industrial states subsidise their railways and their airlines — which means they pay to keep them going because they can’t afford to let them collapse.

Thatcher’s government is now openly recognising the force of this; they are pouring vast sums of money into British Leyland, British Steel and part of their climb down to the miners was a huge financial injection into the National Coal Board. Heath could not have been more generous.

With better luck in capitalism’s affairs, Thatcher’s rule might have coincided with a boom, which would have allowed her to claim that “monetarism” works. As it is, Saatchi and Saatchi have a big job on their hands for they must not only try to prove that “monetarism” is working but that it has even been tried.

A typical mess of deceit.