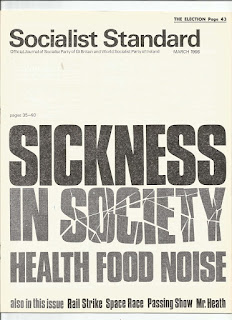 From the March 1966 issue of the Socialist Standard

On March 31st the electorate will once again go to the polls and perform the act which Socialists consider is of crucial importance to the way in which society is organised — they will vote. Like other elections in the past, this one will generate its own groundless optimism. Once again, the illusion will be fostered that here is a fresh opportunity at last to solve the problems which have been a burden for so long. In spite of the enduring failure of all varieties of political parties to overcome such problems as war, poverty and the general chaos that is a constant feature of Capitalism, the Labour and Tory parties will go blandly into this election as if the experiences of the past had never occurred.

The records of both the Labour and Tory parties make a mockery of their claim to be the instruments of social improvement. The past policies of both these parties are an indictment which no amount of hollow phrase-mongering can overcome. For all their talk of progress and modernisation, their ideas and actions are imprisoned by the limitations of the status quo—that is—Capitalist society.

What is at stake in this election? What is it that the electorate by voting Labour, Tory or Liberal will endorse?

Whatever spurious disagreements will engage the Heaths and the Wilsons during this election, in fact they have a great deal in common. Socialists talk about the means of production and by this we mean all the instruments and technical know-how that man has developed for the purpose of producing wealth, from hand tools to nuclear power stations. All reformist politicians agree that these means of production should continue to be monopolised by a small privileged section of the population.

Although the life of the whole community depends on the way in which these means of production are utilised, all reformist politicians agree that they should be geared to the profit motive. They agree that the under-privileged working mass of the population should continue to live only by selling their labour to the owners of industry.

They are agreed on preserving the root cause of the problems facing man. This applies to the wars that so-called statesmen cannot prevent, to the frustration and poverty that arises directly from the workers’ wage employment status. So far as preserving the fundamental features of Capitalist society are concerned, the Labour and Tory parties are of one accord. At stake in this election is whether or not the majority of the population will continue to acquiesce in a society of which they are victims. By voting either Labour or Tory, the working class will endorse their own exploited economic position. This is the basic conditioning factor of modern life. The trivial controversy between the large parties will avoid this fundamental issue.

Although theoretically the working class holds political power through the vote, they have yet to use it in their own interests. It is a power that can only be fully realised when the working class have the knowledge and determination to end Capitalist society.

The Socialist Party does not play at politics. It does not pander to prejudice; it does not flatter ignorance; it does not dilute its case in the pursuit of cheap popularity. The Socialist Party does not offer the corrupt relationship of the leader and the led; it offers an understanding of society and the fraternal association of men and women who are equipped by knowledge, and who know what they want and how to get it. We know that compromise will defeat the sane and rational ends to which we are committed.

The talk in this election about the balance of trade, gold reserves, prices and income policies is an aspect of the commerce and trade in which workers have no stake.

There will be promises to solve the problems of housing, urban chaos, poverty, rising prices and international conflict by men who have failed in the past and who cannot but fail in the future.

The message of the Socialist Party at this election time is a positive one. In addressing ourselves to working men and women, we embrace all those who make a contribution to the wealth and well being of society, be they factory operatives, doctors, technicians, labourers or tradesmen. Only they can rebuild the world to make it a fit place to live in, but not by electing a government to administer Capitalism.

For loo long have their skills and talents been used by a privileged minority to create profit and private luxury. For too long has human labour been subject to the crippling limitations of production for sale.

It is not enough to struggle to defend living standards under Capitalism. These workers must join the Socialist movement to take over industry itself and convert all the means that society has developed for producing wealth to the property of the whole community. Thus commonly owned and democratically controlled, the means of production can serve the needs of the whole community. This action must presuppose any attempt to deal in a practical way with the problems of our time.

CORRECTION in the April 1966 issue of the Socialist Standard
We regret that the article "What is at stake? in the March Socialist Standard contained some phrases liable to misunderstanding. "Labour" in paragraph 6 should, of course, have read "Labour power", and "to take over industry itself" in the last paragraph should read "to capture political power".

The SPGB and the 1966 General Election
The Socialist Party of Gt. Britain will be contesting two constituencies in the coming election—Hampstead (London) and Woodside (Glasgow).

In Hampstead the candidate is H. Baldwin and the election agent is M. Davis. Prior to arrangement of Committee Rooms all members and supporters please contact Head Office where up-to-date information will be available.

In Woodside the candidate is R. Vallar and the election agent is M. Donnelly and up-to-date information on the arrangements is available at the Glasgow Branch rooms.