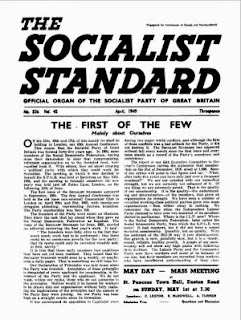 From the April 1949 issue of the Socialist Standard

The debate between Frederic Mullally, supporter of the Labour Party, and our Comrade Turner at the Fulham Town Hall on February 28th attracted a large audience. The large hall was completely filled.

F. Mullally, in opening the debate, said that the Working Class had already made up its mind which party it would support and it supported the mass organisation—the Labour Party. He admitted that there were some individuals in the Labour Party who were as reactionary as some of the Tories. But the Labour Party believes that it can use the Capitalist Class to achieve Socialism. The Working Class did not expect the Labour Party to be able to introduce Socialism for years, maybe, decades. Socialism would not be established overnight, but by well directed, well planned endeavour. Economic chaos would follow the sudden expropriation of Capitalist property, which includes many small shops and factories. What was needed was a planned programme, which avoided any Capitalism. It would be necessary to make compromises. That would be a first instalment and would result in an advance in the material condition of the Working Class and in its standard of living, with the result that support would be gained for a second instalment. The S.P.G.B. propounds pure Socialism day in and day out, hut the Working Class is tired of the worn out catch phrases of this sectarian party. The S.P.G.B. should not waste its great wisdom outside the great mass organisation. One talk, one pamphlet, one speech, one debate inside the Labour Party would do more for Socialism than all the thousands of street comer meetings, pamphlets issued and other activities of the S.P.G.B.

A. Turner commenced by stating that the Working Class should support the party that aimed at abolishing the problems that beset society as a whole and the Working Class in particular. Socialism would do this, so Socialism must be defined. It must be a world wide system in which there will be a community of interests. The privileges of ownership will disappear. There will be no production for profit, all goods will be produced for need. There will be no banks or insurance companies, no money, no profits, no rent, no interest. Poverty and other problems will continue as long as there are Capitalist owners and most of the people are wage and salary earners. The competition between Capitalists grows more intense and leads to greater wars. Whilst wages continue, so will Capitalism. Socialism is not merely the taking away of industry from the Capitalist owners, it is the handing over of industry to the whole of mankind. Taking from one set of owners to give to another does not benefit the workers. When the Labour Party came into existence it was to get Socialism in a quicker way than the way advocated by the S.P.G.B. It was going to do things in a hurry. Now it has slowed down the pace and accuses the S.P.G.B. of being in a hurry. In parts of the world where Labour Governments have held power they have left the Capitalists in greater power than they ever were and have prepared the ground for people like Hitler. Turner concluded his first address by asking his opponent three questions : (1) Is the Labour Party a Socialist Party? (2) Is Nationalisation Socialism? and (3) Can Nationalisation strip the Capitalist class of its ownership?

Mr. Mullally came up for the second round with the statement that the Labour Party is not practicing Socialism and that he had never said that it was. In reply to question one he said that there were good Socialists in the Labour Party and their hopes rested in an ultimate Socialism. To question number two the answer was “NO". But it was a step to that end. Nationalisation was the only practical policy as an alternative to Capitalism. Answer to number three. Rather than confiscate, the Labour Party bad decided to compensate. They had considered the hardship that would be caused to many Capitalists, especially the small ones. They were not concerned with dogma but with humanitarianism. They were going to anaesthetise the rentier class. By a process of taxation on incomes and death duties, the Capitalist Class, will, during our lifetime (voice from audience) "commit suicide." The S.P.G.B. was not in contact with the real issue. The British Working Class was concerned with the day to day issues such as unemployment, health service and that their children were well shod. The S.P.G.B. had a record in the struggle against Fascism that was not so good as that of some Tories. If the Working Class had followed the S.P.G.B. Hitler would now be over all Western Europe.

Turner replied. In answer to the Labour Party claim to be humanitarian he quoted the cases of dismissals from employment in Nationalised industries and the threats of dismissal to strikers. If Nationalisation was a step towards Socialism, why did the Labour Party oppose Fascism? Fascists like Franco, Pilsudski, men like Bismarck and our own Tory Party had introduced Nationalisation. When the workers made some move to get more wages or do a little less work, it was the Government that put the machinery in operation to oppose them. The Labour Government was no exception. The S.P.G.B. was small and its funds were but a tiny fraction compared to those of the mass Labour Party. If all those millions of pounds of funds and all that effort had been directed to the achievement of Socialism we should have been much nearer the day of its establishment. But the money had been spent on supporting two world wars and in getting power to use the Emergency Powers Act Mr. Belcher, during the recent tribunal, had said that it was a part of his job to talk to business men about their problems. The Labour Government never thought of talking to the workers about their problems.

In his final speech Mr. Mullally said that the S.P.G.B. way to Socialism would make for a major economic crisis in the country. The Labour Party would remove private ownership tidily, orderly, and with its eyes on the objective. The S.P.G.B. should be renamed “The Party of Permanent Opposition.”

Turner concluded by claiming that the S.P.G.B. was proud of its war record, it took its stand on the basis of internationalism. But the Labour Party has found new menaces, new fascisms, new concentration camps and forced labour camps in another part of the world and is preparing for another war. He, Turner, was pleased that at least one member of the Labour Party, his opponent, had repudiated the claim that the Labour Party was Socialist.

At this point the chairman, referring to Turner’s statement that the Labour Party claimed to be a Socialist Party, said that Turner should not make such statements without documentary evidence. The necessary evidence was immediately supplied from the Labour Party Election Address, “Let us Face the Future,” Dealing with the taxing out of existence of the Capitalist class Turner mentioned that when Sir John Ellerman died, £21,000,000 was taken in Death Duties from his £40,000,000 estate, but in a few years the Ellerman fortune was up again to £50,000,000. The S.P.G.B. was sometimes referred to as a monument to Socialism. That was preferable to being a movement to destruction like the Labour Party.
W. Waters

Check out Mullally's wiki page. Seems like a fascinating guy:

The full details of the debate - as listed in the February 1949 Socialist Standard - were as follows:

"Which Party should the Working-Class Support? The Labour Party or the Socialist Party of Great Britain?"

Sign of my then increasing testosterone...i remember the cartoon strip Wicked Wanda