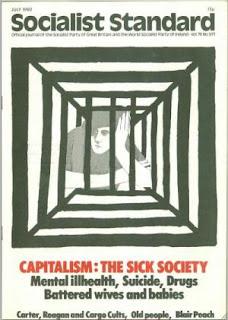 From the July 1980 issue of the Socialist Standard

Family Rescue (formerly Women’s Aid), the independent refuge charity for battered wives, is approached by about 700 women every month in Britain. In the North Wales county of Clywd massive steelworks redundancies have recently coincided with an increase in the incidence of reported cases of wife-beating to 18 per cent of married women. But the extent of domestic violence will never be possible to estimate with any accuracy, since many cases must go unreported. In 1979, though, the NSPCC was involved in 38,078 cases of suspected child-abuse, and statutory enactments relating to the crime of infanticide have by no means become redundant; about two babies are beaten to death every day of the year in this country.

Erin Pizzey, who founded Chiswick Women’s Aid in 1971, is the author of a Penguin special, Scream Quietly Or The Neighbours Will Hear (1974). The book includes details of many of the women who sought refuge in Women’s Aid centres. While emotional shock tactics will not in themselves solve anything, there is good reason for reading the book. The horrific details of individual cases make clear that this is one of the most physically damaging and mentally debilitating social problems produced and fostered by capitalism.

The fact that wife-beating and other domestic violence are often caused by the economic conditions forced upon the working class of the world is made clear by the latest annual report of the National Society for the Prevention of Cruelty to Children:

“The threat of an economic recession; high unemployment; fears of redundancy; rising prices; diminished support from public funds—all these factors add to family tensions and to the risks to children becoming scapegoats.”

Needless to say, wives can equally well serve as scapegoats. Capitalism is a system in which the vast majority are forced to sell their labour power to enterprises or states, for wages or salaries because that is the only way they can live. The NSPCC report concedes the extent to which this is the cause of social problems; even in the Year of the Child (one of capitalism’s more nauseating black jokes), there were “. . . thousands of cases where children have been reported as being left alone . . . All too often neglect comes because parents have to go to work from sheer necessity” and a recent report by the Study Commission on the Family notes that

“To achieve the same relative living standards which might have been afforded in the 1950s through the efforts of one breadwinner, families of the 1970s increasingly required the employment of two wage-earners.”

Living in cramped homes on low rate food and in sub-standard conditions, the working-class husband and wife face each other and a series of financial problems, ranging from mortgage payments to finding the money for some shoes for the children. When to this is added the strain of capitalist monogamy itself, with its ideal of domestic bliss and harmony to live up to, its hypocritical morality and its barely concealed legalised prostitution, the tension can sometimes reach breaking-point: a baby crying, or a jealous suspicion.

A system of society where the means of life are monopolised by a minority class depends upon the passive or active assent of the majority to this massive theft. It also needs force, both to ensure that no individual steps out of line and, on a much larger scale, when two nations send their working classes to murder each other in an attempt to settle some capitalist dispute over markets or raw materials. So violence is bred by a society which depends upon humiliating, intimidating force as an integral part of its constitution. In war, violence is hailed as the greatest of virtues, provided that it is used against “the enemy”, and this ideology is difficult to erase when the war ends.

Moreover, the social impotence of any member of the working class in relation to the productive machinery he or she helps to operate is very likely to produce a bitter frustration, which can only be relieved by the worker trying to disprove his impotence. The attempt to achieve such control or power may take the form of a clumsy and violent attack made on wife or children. Mere employees, who possess nothing but their own ability to work, form the vast majority in capitalist society and yet have no power or control over production, which is run solely for the profit of the capitalist class. This manifest impotency in society can lead to some workers bullying others. This is the cause of sexually inspired violence between man and wife.

All of these reasons for wife-beating stem from the same root cause: the pressures imposed upon the working class in a capitalist system of society. The Times Higher Education Supplement (4.4.80) reviewing Violence Against Wives: A Case Against The Patriarchy by Rebecca and Russell Dobash, explains that the most frequent source of confrontation, according to the Dobashs’ extensive research, is

“Sexual jealousy (almost always unfounded), followed by disagreements over money, and the husband's expectations regarding the woman’s house-making . . . the majority of attacks take place when the husband is sober, contrary to the popular idea of the drunken husband.”

To comprehend this problem of “sexual jealousy”, account must be taken of the historical development of the monogamous marriage in capitalism.

Since the first appropriation of surplus wealth as property occurred at a time when there was a clear division of labour between hunting meat on the part of the man and gathering vegetable foods and managing the home on the part of the woman, and since this first property fell in the domain of the former, it was men who became the first property owners. Consequently patrilineal descent was required to replace the “Mother-right” which had previously prevailed. “The division of labour within the family had regulated the division of property between the man and the woman.” (Engels, The Origin Of The Family.) If a woman bore a child not fathered by her husband, she would be bestowing his property upon the progeny of another. He, conversely, could bestow his property where he chose. Monogamous marriage arose from the need for men to direct their property to heirs whom they knew they had fathered. It soon becomes clear, though, that it is only the propertied, capitalist class for whom marriage is still based on considerations of inheritance.

One suggestion sometimes made as to why some men beat their wives is that it is a psychological complaint which is taught from father to son through the generations of a family. It may be true that some working-class families have experienced a good deal more domestic violence than others, but to try to explain it away as a sort of congenital, inherited disease is to ignore the objective, external conditions which actually provoke the problem. No such problem occurs in a vacuum; it is a social phenomenon, produced by the way in which society is organised.

Wife-beating
Sometimes it is suggested that the wives actually experience masochistic pleasure from being beaten, and therefore intentionally provoke it. The fact that many of them remain with or return to their husbands is adduced as evidence for this. It is probable that some women have learnt to like such treatment, seeing it as a sex substitute, but there are more substantial reasons for their apparent inertia:

“I have left my husband in desperation five times, but have had to return for my children's sake, as he didn’t take care of them in my absence.” (Pizzey, p. 21.)
“I don't love him any more but it seems that society is forcing me to stay with him” (p. 35).
“I can’t leave the children and it is a job to get a room with children.” (P.48.)
“I really would like a separation, but how do you find a place to live with four children?” (p. 86).
“One has to be a mother, father, breadwinner and housekeeper alongside the continual terror, in my case, of being discovered by my husband and assaulted yet again." (p. 88).

The problem of wife-beating is by no means a new one; it has been prevalent in most previous forms of property society. Until about 150 years ago it was recognised in British law that a man had the right to chastise and confine his wife. He can still rape her without breaking the law. As early as 1395, Margaret Neffeld charged her husband with knifing her and breaking her bones. He claimed before an ecclesiastical court that he had acted solely for the purpose of “reducing her from errors". Judicial separation was refused by the court. It was not until the Matrimonial Causes Act 1878 that magistrate’s courts had the power to grant a separation order with maintenance to a wife whose husband had been convicted of aggravated assault upon her.

“The Dobashs discovered that wife battering, far from being the action of a pathological individual (a theory dear to many), is a mode of behaviour revered, respected and encouraged for centuries. Throughout Western history, there has been legal, political, economic and ideological support for a husband’s authority over his wife, and this includes his using physical force against her.” (The Times H.E.S. 4.4.80.)

The problem threatens co-habitees as much as wives, and from a legal point of view the former can be in an even worse position, Emotional assault, too, can be very disturbing, even if its effects are less tangible. In some countries, wife-beating is still legal, and in Great Britain it is difficult for the woman to obtain “satisfaction” in a judicial process. In any case, whatever laws are made in an attempt to cope with such a problem, both the aggressor and his bruised wife will remain wretched victims of a social system which makes beasts of them.

The motive behind the attitude of social workers is to support and sustain the family ideal. The police are loath to take any action in what they refer to as “domestic matters”. The Family Service Unit, a body established to deal with the “problem family”, said in a 1973 journal: “It is important to differentiate between sporadic ‘battering’, which can be regarded as part of a normal marriage, particularly in certain cultural groups, and more persistent beating”.

So much for relying on charity to mop up after capitalism. Some of the battered women are given ECT—shock treatment or even leucotomies in mental hospitals to “ease the pain”, leaving them with a dull indifference to all that goes on around them. The offending items are cut off from the gaze of society, the deranged mind deflated to indifference. Social workers categorise cases with a cool, clinical calm.

However much Erin Pizzey's suggested reform measures may be well-intentioned, and however much individual battered women appreciate the refuge temporarily offered to them by Family Rescue, the fact is that however many refuge houses are built for its casualties, capitalism will produce enough damaged and degraded people to fill all of them over and over. The only meaningful step to take, is for the men and women of the working class to unite and face up to the way in which they do not come together in affection but are thrown together under intolerable conditions in order to stoke up profits for a leisured minority class into which they were not born.
Clifford Slapper
Posted by Imposs1904 at 9:12 AM