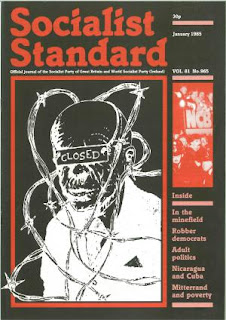 At the last Labour Party conference Neil Kinnock made an impassioned appeal to Labour members to sink their differences and rally round his leadership. He asked them to win power for Labour so that they could end the blight and waste of unemployment and make the world a safer place to live in. Kinnock argued that these social evils flowed from the policies of the Thatcher government, thus implying two things: firstly, that unemployment is the result of government policies; and secondly that a change in government will remedy the situation

Poverty and unemployment have indeed increased in the last four years or so. Where the writer lives—Scotland—there are now three-quarters of a million people living below or on the "official'' poverty line and a further quarter of a million working in low paid jobs which place them on or below this line. The poor live on incomes that give a married couple with two youngsters only £59.20 a week, or £8.46 a day. a payment which in real terms is only 25 per cent above Rowntree's official poverty line of 1936, which he considered "the minimum in which physical efficiency could be maintained". These appalling figures apply equally to other parts of Britain. Recent estimates of poverty, using only a slightly more generous estimate than that of the DHSS. put the number of British people in poverty at fifteen million. Once in poverty a whole series of forms of deprivation follow: bad health, poor housing and educational facilities, and so on. Poverty has no respect for age; it hits the young and the old the hardest. One Glasgow pensioner puts its impact in vivid terms: "Eighty-two years old and hardly a stick of furniture to call my own. I can't afford to heat my house and eat as well".

The cause of poverty is not to be found in the policies of the Thatcher government, but in capitalism itself. It is a society of glaring contradictions in which people starve in the face of a mountain of food, where people are homeless and at the same time building workers are made unemployed; where more is spent on amassing weapons of annihilation than on health. Capitalism is blind to need; it exists only to accumulate wealth for the tiny proportion of the population who own the resources of society. Because it is based on the anarchy of the market, from time to time it stumbles into crisis. This, of course, occurs on a world-scale and not just in Britain. We at present are living through such a world depression, in which workers have been thrown out of jobs not because they have produced too little, but paradoxically because they have produced "too much". The trouble with Kinnock and Thatcher is that they assume that governments can do something about it. Slumps, they claim, can be ended through changes in government policy. For Kinnock it is increased government expenditure; for Thatcher it is decreasing public expenditure.

Both are doomed to failure. In the 1970s government expenditure increased four times yet unemployment rose from half-a-million to two million. Faced with such problems. Denis Healey, the Labour Chancellor, imposed the first round of spending cuts in the social services. The Thatcher government has carried on where Labour left off in the belief that cutting public expenditure and reducing taxation would stimulate investment in industry. What both miss is the fact that slumps are natural features of capitalism. As an economic system capitalism has been characterised by booms and slumps throughout its historical development. Only when business confidence is restored by the prospects of renewed profitability will investment recommence and unemployment fall as output increases. Claims that Labour or Tory can get Britain working are fatuous and also encourage people to believe in simplistic notions of good and bad governments.


At the moment the very mention of the word "Thatcherism" is enough to make a left winger foam at the mouth, to seethe with anger and indignation. The reaction is quite understandable. Thatcher and her crowd, in their exhortations to the unemployed to get on their bikes and find work, and their comparisons of striking miners with international terrorists, are callous and calculating. The trouble is that their rhetoric and complacency amid a multitude of personal disasters distract people from examining the system they represent and fix attention on personalities. Not so long ago the personification of evil was Edward Heath. Since then he has become a good guy, although not as good as Kinnock.

Although we cannot compare the government performances of Thatcher and Kinnock, comparison can be made between former Labour governments and the present Tory one. In the area of trade unionism the left argues that present Tory policy is designed to shackle and weaken organised labour. We would agree with this verdict, but is the Labour Party any better? During the so-called winter of discontent James Callaghan, Labour Prime Minister,

said in the Commons (January 1979) that "everyone has the right to cross a picket line and I hope they will do so". Remember also it was Labour back in the 1960s through Barbara Castle's white paper In Place of Strife — who tried to impose upon the trade unions measures not dissimilar to present Tory policy — for example secret ballots, cooling off periods, and so on. Moreover Labour s treatment of strikers is no more sympathetic than that of Thatcher. During the last Labour government the vicious Special Patrol Group was used on pickets at Grunwick; troops were used to break the firemen's strike; and the public sector workers opposed to Labour's "social contract" (read contrick) were vilified and hounded

Thatcher is also accused of running down the social services and of creating more inequality by making the rich richer and the poor poorer. Indeed inequality has increased, but again has Labour done better? Under the last Labour government there were cutbacks on spending in health, education and housing. The Child Poverty Action Group reckoned that children were worse off under Labour than they had been under the Heath government of 1970-74. It was during the Wilson/Callaghan government that the Fight the Cuts demos began. What inflamed much of the protest was that while the working class was bearing the brunt of the economic crisis the rich were seeing their incomes increase. During the Heath government the proportion of wealth owned by the top 1 per cent fell from 30 per cent to 22.5 per cent; under Labour it climbed to 23.5 per cent in 1975. 24.9 per cent in 1976, and so on upwards. The original reason for Labour coming into being was to redistribute wealth and this they have failed miserably to do.

The past experience of Labour gives us nothing to cheer about and neither do we believe that things will be much different if Kinnock gets elected. Blind faith in leaders has got the working class nowhere. In the 1950s the darling of the left was Nye Bevan, who led the fight within the Labour Party for unilateral nuclear disarmament — that is until he became the shadow foreign minister and asked members not to send him naked to the conference tables of the world. In other words, without the bargaining counter of the nuclear bomb. More recently, another former pacifist—Michael Foot— outdid the Tories in his jingoism during the Falklands War. He, along with Tony Benn, was a member of the Labour Cabinet which introduced Polaris behind the backs of their own MPs. How can we believe that Kinnock will prove different, particularly when surrounded by such well-known "socialists'' as Hattersley and Kaufman?

There is no doubt that the Labour leadership is once again ready to give full support to British capitalism. This does not surprise us; since Labour has no idea what socialism is. it has no notion of how to achieve socialism. Both the Tories and Labour are out to run capitalism. They may disagree as to the best way to run the system but they have the same objective. But capitalism has shown itself to be incapable of operating in the interests of the working class. Kinnock or Thatcher represent the politics of the nursery. Why not join the grown-ups in the struggle for socialism?
Bill Knox