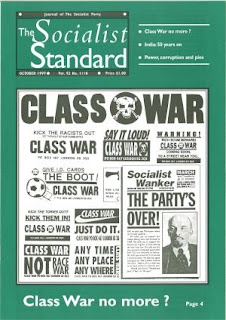 In August Indians celebrated fifty years of independence from Britain, or at least some of them did. Socialists in India didn't, as Binay Sarkar of the World Socialist Party (India) explains

There were festivities down to the village level with flying colours displaying the logo to rekindle nationalism as “a people's event”. Fifty years previously, our class-elders had paid a high bloody price for the "Independence" that couldn't end their dependence.

National independence is a capitalist business. Feuding factions of the selfsame class that win and control territories for profit, their politicians, media chiefs and paid hacks—Indian, Pakistani as well as "the imperialist" British, and maybe their global compatriots—got the show in motion on Friday 15 August 1997 to celebrate the occasion that occurred on a Friday fifty years ago.

Colonialism
In the middle of the present millennium the search for markets, sources of raw materials, cheap labour power and most profitable locations for business gave rise to "colonialism", having transcontinental ramifications into all pre-capitalist formations. This indicated capitalism’s global dimensions right from the beginning. It was British merchant capital which navigated Job Charnock. who on 24 August 1690 arrived at the village of Sutanuti that later developed into the capitalist city of Calcutta, the first capital of British India.

Capitalism in India began to spread with the building of harbours, roads, railways, mills factories and banks—no matter what race, religion, language and territory capitalists and workers originated from. For capital is not a personal but a social force. Its movement in India accorded to its intrinsic alienating, uneven and competitive laws of motion. Battles, mutinies, marches and proclamations have well recorded this course in India as elsewhere.

Two centuries later in an atmosphere of great unrest due to poverty, famine and oppression, a populist platform became necessary to channel people’s wrath. Indian capitalists, intellectuals and their associations were encouraged by some British officials. Hume, Wedderburn and others with support from The Statesmen’s founder-editor Robert Knight in inaugurating the annual gathering of the nationalist movement called the Indian National Congress on 28 December 1885. The British government required it to work as a safety-valve, because by then a more confident and secure British capitalist class were learning to rule more with words than with swords.

In the 1906 Congress a group led by Tilak which favoured self-government secured a majority. Meanwhile on 30 December 1906 the Muslim League was founded by a group of well-to-do Indians claiming to represent the Indian Muslims with their "Pakistan" plan for separate states.

By 1920 the Communist Party of India was formed in Tashkent. On 15 May 1922 it launched its organ The Vanguard of Indian Independence, later changed to The Masses of India, on I January 1925. Right from its inception the CPI clearly accepted Lenin’s fatal reversal of the class position of Marx and Engels—that the emancipation of the working class must be the work of the working class itself, and that proletarians have no country—to the ideology that workers are to be led by a minority vanguard party, that workers are the true patriots, and that "socialism" secures nation-states, and further that the struggle in the world is not between workers and capitalists but between imperialist and anti-imperialist states. However, "No party can serve two masters,” as the saying goes: a party serves the interests of one class or another.

Strikes and riots
Two lak [200,000] Bombay workers went into the first Indian general strike on 2 January 1919. Later the Great Depression caused strikes in industrial India—in Bombay textile mills (16 April to 5 October 1928), Tata Iron and Steel. South India Railways, Lillooah Railway workshops, Bengal Jute Mills. Calcutta Scavengers, etc. The Calcutta scavengers’ strike (April 1928) showed that the nationalist City Council could be as repressive an exploiter as the British nationalists. The lesson of the Tata Strike (January 1928) was that leaders would do anything to end strikes on terms to their own gains. Subhas Bose, the nationalist leader, assumed chairmanship of one union and then betrayed workers by accepting the very terms which he had described impossible in an opening speech. This leader once declared “Give me blood: I promise you freedom."

In the Burma Oil Works in Bombay on 5 December 1928 a strike began and kept going with mass pickets. The owners began bringing in Pathans (backward peasants and hillmen) as strike-breakers. Bitter and bloody conflict eventually led as many as 100.000 workers to come out in a massive demonstration on Bombay streets. Meantime efforts where made to rouse antagonism between Muslims and Hindus. Whenever there was a strike capitalists’ agents started quarrels between Hindus and Muslims so as to turn struggles between classes—workers and owners—into strife between religious crowds, the old rulers' policy of "Divide and Rule".

Famine
In 1943 The Great Bengal Famine took "some two to four million lives" (FAO calculation). However, the per capita availability (rice and wheat) index for 1943 was higher by about nine percent than that for 1941. Bengal was producing its largest rice crop in history in 1943. The biggest section of those killed in the famine were landless agricultural labourers. They produced the food, but couldn’t buy it back to consume, for they had no money to buy it with, because they only worked, but didn’t own.

Transfer of power
The Viceroy signed the "Indian Independence Order and International Arrangements” on 14 August 1947 dividing "British India” into two: the Dominion of India with Mountbatten as Governor-general and Nehru as Prime Minister; and the Dominion of Pakistan with Jinnah as Governor-general and Liaquat Ali Khan as Prime Minister. At a special midnight session the Constituent Assembly passed the Oath resolution promising "common prosperity". Rajendra Prased, President of the Indian Constituent Assembly pledged an endeavour "to end poverty . . . hunger and disease, to abolish distinctions and exploitation, and to ensure decent conditions of living”. Nehru said. "When the world sleeps, India will awake to life and freedom. A moment comes, which comes but rarely in history, when we step out from the old to the new.”

But "the new" had no problem now with "the old", as Nehru expressed "grateful thanks" and assured the continuation of the "closest co-operation" with the British government in reply to Attlee's "greetings and good wishes to the Government and people of India".

"The mass of India” got "lndependence’’.The public of Calcutta were ordered to enjoy “freedom” under curfew "due to disturbed conditions". And The Statesman (15 August 1947) headlined: "Political Freedom For One-Fifth of Human Race"—"Joyful scenes in Calcutta". Comment would be superfluous.

Pakistan was created comprising separate territories in NW and NE India on the notion of religious homogeneity. Yet India and Pakistan went to war in 1965 on the "Kashmir question" and in December 1971 on the "Bangladesh" issue. East Pakistan became "independent" Bangladesh in 1972 on the notion of linguistic homogeneity. Both were in ill accord with social reality. Then Bangladesh gave workers a famine in 1974.

The propaganda that "freedom" gave us the vote in 1948 is untrue. Workers had to achieve it.

In India the process started under working-class pressure with the Morley-Minto reforms of 1909. In 1935 the British government passed the Government of India Act—called the New Constitution—enacting the right to vote for more than 30 million people (about 12 percent of the population). Provincial elections were held in 1937. It was thus that arrived the ballot. But democracy for revolutionaries isn’t just the ballot, but the participatory democracy, revocable—delegated—socialist democracy based on a world co-operative commonwealth.

From “Go back” to “come back”
In 1942 Indian leaders shouted: "Quit India"—"Go back.” Today they invite: "Catch India"—"Come back”. Of course, not to rule, but to invest, in Indo-British, Indo-Japanese, Indo-American "joint ventures."

Again there are round table talks. But this time to talk "international interdependence" and not “national independence". Talk they must; they are talkers, because they are owners. They needn’t work, but talk—to tell us not to talk, but to work.Theirs is "talk-culture", and they are true to their ideology. But when they make a showpiece with profit-hungry gangsters who say they gear international investments around concern for our children’s upbringing and "decent conditions of living”, we observe that they are being deceptive and fear the truth.

“Now the youth must be the focus of the drive”—goes the central celebration call. The leftists asked youngsters to fight for "the right to work", just a "right" to be exploited!

Socialists cannot encourage the youth to ask for "rights". Instead we urge them to forget the crumbs from the dishes of their masters’ feast, but instead organise to take the whole feast for themselves by replacing the capitalist logo: "One Nation—One State" with the socialist one: "One World—One People". The obstacle only lies in our minds—the "fear of freedom". Remove fear. Be free to be one to the Movement. Don’t feel you need to be led.