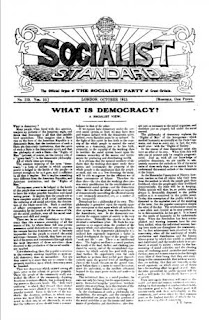 Editorial from the October 1913 issue of the Socialist Standard

What has been called the “labour unrest” continues to be as much in evidence as ever. Up and down the country there are strikes and lock-outs, and rumours of strikes and lock-outs. Askwith, the peacemaker, is kept pretty busy rushing hither and thither, tendering hie services at the moment when the men are exhausted in the struggle, in order to aid the pretence that the powers that with ride and baton have cleared the way for the blackleg and the strike smasher, really do take a detached view of the case, really do desire to “keep the ring" impartially, really do feel solicitous regarding the welfare of the worker. Here and there the workers have tasted the fruits of victory, and won perhaps a few pence advance in wages, to go with the increased cost of living, or have gained an hour or two more leisure, as a set-off against the increased speed of their labour, or have established the right to wear a button—an emblem of freedom, to give the lie to the police badge and other trappings of slavery. In more numerous instances the men have suffered defeat, and have had to return, where they have not been supplanted, to as bad conditions of toil as before—or oven worse. And in some cases the protracted struggle goes on, with terrible consequences in working-class “homes"—and not one whit less terrible because bravely endured.

No one in his senses will deny that, under the present social system, these battles and the suffering they involve are both necessary and inevitable. They are inevitable because in a competitive system, with labour-power possessing the commodity nature, the price of that labour-power can only be determined in the way that all other prices are determined, that is, through struggle.

But to say that the strike is a necessary weapon is by no means to say the last word about it. After all, the strike is but an attempt to withhold labour-power, an organised effort to prevent the masters from purchasing that human potential energy which they must have. And it is just because the strike to day almost invariably fails—not to win the strike: the significance of the situation does not lie therein — but to withhold labour-power, that it has become the object of the Socialist's criticism.

That the general policy of the trade unions in restricting admission to the organisations is one of the contributory causes of the failure of the strike weapon cannot be denied, but the fact is not of first importance. The inroads of machinery in the vast majority of trades is every day making it easier for the masters to replace strikers with blacklegs, partly because of the increasing number of unemployed, but still more because of the lower proportion of “skilled” workers required in industrial processes. One baker, for instance, can direct a score of labourers who have only to feed material into machines in order to produce bread.

It is this increasing supply and availability of blackleg labour that presents the problem to the striker. It is a growing power in the masters’ bands. It grows in spite of the workmen’s frenzied attempts at organisation and it undermines their position in the very hour of victory, and crushes them to the ground in helpless ruin even as they reach up for the meagre reward of their pain and suffering.

The unions at present have no other idea of combatting the terrible scourge of blackleg labour than the crude one of opposing it with bottles and brickbats. It is safe to say that all but an infinitesimal portion of the “rioting” which almost invariably accompanies strikes is directly due to the endeavour of the masters to introduce blacklegs into the positions vacated by the strikers. Of course the latter cannot afford to let this pass without putting forth every effort to prevent it. The result is collision with the armed forces, and maimed and murdered workers.

In such circumstances—with an ample reserve of men who are driven by hunger to the detestable crime of “scabbing,” and an armed force sufficient to ‘‘ preserve the peace," which means in this connection to enable the masters to smash the strike with their blackleg reserve— the strike weapon falls inert and innocuous, st least u far as the masters are concerned.

Nor is this all. Emboldened by the impunity with which it may be done, those in power show a marked tendency to resort to the murder of the workers upon progressively smaller “provocation” or excuse. The use of the military in the great railway fiasco—placed under arms before the strike had commenced; promised to the masters even before they dared to drive their miserable slaves to extremities—and the brutal smashing up of peaceful meetings at Liverpool, and more recently st Dublin and other places, proves this. The Law, which seems to be helplessly paralysed in the face of the Carsons and Smiths fulminating flagrant treason and wholesale sedition, can be strained to outlaw every movement of the workers, and even to shatter that imaginary, but firmly believed-in institution, free speech!

The reason for this growing contempt for the liberties the workers had got into the habit of thinking their fathers had won for them is not at all obscure. Time was when any Government thought twice before they antagonised the vast body of working class voters by open acts of brutality for which even the most plausible of them could find no passable excuse. But that political retaliation which the politicians feared has, as far as the Liberal party is concerned, been effectually scotched by the Labour Party. Bitterness against the open and avowed Liberals will express itself simply in more votes for the sneak Liberals masquerading in Labour’s robes.

Those workers who placed their faith in this precious party of traitors which dares to call itself the Labour Party, may now cast a dubious or even rueful eye upon their chicken when it comes home to roost. But at least it should have taught them one useful lesson. Is it conceivable that astute politicians, so eager for pelf that they cannot keep themselves clear of Marconi entanglements, would jeopardise the sweets of office by placing the armed forces at the disposal of every trumpery concern that chose to butcher its employees on the question of 6d. a week? In the face 42 true Labour men who could throw the politicians out of office at any time they would not dare to do it. In the face of ten, or five, or two men elected on the class struggle, who would get up in the name of their party and proclaim such acts of aggression what in fact they are —simple acts in the class war—they would certainly be more circumspect

For every such act then, instead of merely shifting the workers’ allegiance from Liberalism to Laboralism, would drive home to thousands the need for uncompromising hostility to all capitalist political parties—and it is just this that all capitalist politicians, from Asquith in the clouds to Macdonald in the gutter, hate and dread.

It is for this reason that, even for the immediate purpose of fighting the question of wages and conditions under capitalism, the political policy of the Socialist Party is superior to the trade union policy of political alliance with those to fight whom on the economic field they ostensibly exist.

But it would be prostituting our cause and our ideals to leave the argument there. It is not for the advantage of the moment that we Socialists strive. That the Socialist political policy is the best one for the worker engaged in the everyday struggle on the economic field, is so because the same facts environ every phase of the class struggle. The same armed forces face the striker endeavouring to obstruct the blackleg as faces the revolutionary aspiring to overthrow the system. The same police and military uphold the right of the masters to smash a strike as uphold and preserve the system of wage-slavery. For this very reason the course of trade unionist, seeking to restore to the strike weapon some of its old-time efficiency and power, and that of the revolutionary aspiring to the abolition of the master class as such, lie along identical lines. It is to get their hands on the instrument controlling the movements of all the armed forces.

This instrument, of course, is the political machine. So it amounts to this—the trade unions must adopt the political policy of the Socialist Party, even for their own purposes. They have tried the experiment of getting their “leaders” into the House of Commons with the aid of Liberal votes, only to find that they have been attached to the tail of the Liberal kite. They have allowed ambitious men to climb to place over their backs, assisted by the friendly hands of their masters, only to discover that when times hands are reeking with the blood of murdered workers, the “Labour” members, instead of repudiating them, but cling to them more tightly, because to let go is to fall.

It is clear, then, that the trade unions, even for the purpose of playing their part as a brake on the downward trend  of working class conditions, must aim at placing the greatest possible restriction upon the use of the armed forces for strike-smashing purposes. But to accomplish this they must rely upon the working class alone. They must take their stand upon the class struggle, because the only thing the masters are afraid of is that their acts of brutality may illumine the line of class cleavage. They must take control of their own political power, and so order things that it is they who command, that it is they who must be obeyed, that it is them, and not the masters, with whom their representatives dare not break faith.

To achieve this end it is clear that neither the workers nor their representatives may owe anything to the master class. All must be gained in the teeth of the enemy. Hence there must be no compromise. The masters fear only the growth of the recognition of the class struggle. It is through this fear alone that the workers, until such time as they have captured the entire machinery of government, can hope to exercise any restraining influence upon the brutal instincts of the masters fighting for their profits. They must stand, then, upon this class struggle, giving the utmost prominence to it, so that every aggressive act of the masters shall stand clearly out as class aggression, and, by increasing the class-consciousness of the workers, frighten the rulers into second thoughts before they serve out ball-cartridge to their minions.

Only the revolutionary candidate can fulfil the requirements of the trade union (or any other) worker, because it is only of revolution the masters are afraid. Only the properly so-credited candidates of a sound working-class political party can meet the needs of the worker because only through such an organisation can the workers’ representatives be guaranteed and controlled. Only the Socialist Party is a sound working-class political party, because it alone is based on the class struggle and is hostile to all other parties. The moral is obvious.