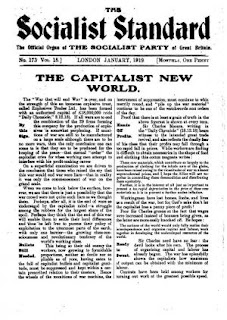 From the January 1919 issue of the Socialist Standard

The Government are now making a frantic effort to throw dust in the eyes of the people on the question of what they are pleased to call the “British intervention in Russia.” The Secretary of State, Lord Milner, claims to have received a letter on the subject from a correspondent, and whether this is a put-up job or not, his statement purporting to be an answer to this letter is such a wishy-washy production as to be little else than a subject for derision and laughter.

. . the Bolsheviks, whatever their ultimate object, were in fact assisting our enemies in every possible way.
It was owing to their action that thousands of German troops were let loose to hurl themselves against our men on the Western Front. It was owing to their betrayal that Roumania, with all its rich resources of grain and oil, fell into the hands of the Germans.

These are deliberate lies. The facts are plain enough to view. Russians were beaten to a standstill under the regime of that advanced and enlightened ruler whom our bosses’ papers at that time referred to as “our Gallant Ally,” and some time previously had honoured with the name we still love to know him by—Bloody Nick.

It was under Nick’s generals that the “Russian Steam Roller” was reduced to impotence. The poor, unlettered moujik played his unwilling part in the war “according to plan.” He was the cheapest cannon-fodder in the whole arena, in the sense that there were enormous numbers of him, and he was probably the only soldier in the whole conflict who could be driven half armed and ill equipped into the slaughter merely as a stop-gap, a. mass of quivering, valueless flesh to keep the "enemy” busy while rival generals and statesmen squabbled over the questions command, and personal and “national” dignity.

So, in spite of the Allied liars who are casting about for excuses for attacking those who are threatening capitalist interests in Russia, defeat, complete and irretrievable, was the legacy left the Bolsheviks by their feudal and capitalist predecessors. Even had they desired it; even had the capitalist revolution not completed the ruin of the giant Russian military machine, the Bolsheviks had not the means to carry on the war against the powerful, victorious, and perfectly equipped German host. Already, under the capitalist Premier, Prince Lvoff, in 1914, the Russian forces had begun to melt away. Skulking Kerensky and his fellow butchers tried to keep them together by the usual means of wholesale slaughter, but their failure was ignonimous. It was not for want of the will to murder that they failed. “General Kornlioff is given orders that deserters and runaways are be shot,” declared the “Daily Chronicle” on the 24th July 1917. The war-mongers had their opportunity, and their failure proves beyond all refutation, that peace was the ardent desire of the Russian peoples. The very success of the Bolsheviks is based on this almost universal desire of the people of Russia for peace. No honest man with a knowledge of the facts can contend that the Bolsheviks find their chief support among those who understand Bolshevist principles. They found a war-sick people—a people who had been driven to war by organised military brutality and tyranny—they promised them peace and—wonder among politicians!—kept their promise. And this our British capitalist apologists call treachery, and "helping the Germans.”

The fact is that neither the Bolsheviks nor the Russian people ever made any promises to the Allies, or entered into any compact or treaty with them. All such contracts were entered into by the Tsarist gang. These ghouls did not represent the people, and the Allies knew it. They did not worry in those days about “only negotiating with governments representative of the people,” nor did they think it “an obligation of honour”—what language from one of the central figures of the South African outrage) “to save” those with whom they entered into the treaties. For they rushed to congratulate those who overthrew their allies, co-plotters, and partners, Bloody Nick and his circle. It never entered into their heads when they expressed gratification at the downfall of their partners in this awful crime, that “it would be an abominable betrayal, contrary to every British instinct of honour and humanity” to, “simply cause our own immediate purposes have been served, leave them to the tender mercies of their enemies.”

All the Allies' reasons for invading Russia, as put forward in Lord Milner’s letter, since they turn on the alleged German exploitation of Russian resources, cease to afford any pretext for the continued occupation of Russian territory by the Allies in view of the present military position of Germany. The only shred of excuse offered is that they must not leave the “thousands of Russians” who, ‘in the course of this Allied intervention" have “taken up arms and fought on the side of the Allies,” to “the tender mercies of their enemies before they have had time to arm, train, and organise so as to be strong enough to defend themselves.” This cant might go down but for the light shed upon it by other events. These (probably mythical) Russians are not the only people who have fought on the side of the Allies. To use a phrase Lord Milner is very fond of, “I say nothing of the poor, cast-off crippled soldier at home abandoned to the tender mercies of private charity. There are others. The Armenians, for example, they fought on the side of the Allies, yet the latter have not scrupled to abandon the poor remnants of an agonised people to the tender mercies of their enemies, the vengeful official Turk.

What Lord Milner really means can be read in his reference to the arming, training, and organising of the Russians who have fought on the Allied side. These Russians are the Russian capitalists and their hireling butchers. It is to arm and aid these, and to establish capitalist rule in the vast domains now under Bolshevik administration that our lads are now being kept from their homes. It is to assist in crushing out a working-class rising, that British sailors are firing at Bolsheviks on the shores of the Black Sea.