The Rehabilitation of Pavel Dybenko (1964) 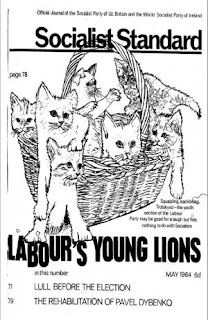 From the May 1964 issue of the Socialist Standard

Ever since the death of Stalin, the rulers of Russia and of the farcically named Peoples Democracies have been engaged in a new industry—the rehabilitation of ghosts from their murky past. So far they have not actually succeeded in bringing back to life one of Stalin's murdered victims, but, no doubt, they are working on that; while another feature is that the bones which are now moved up to the more desirable plots in the cemeteries are always those of Communists—and usually Stalinist Communists at that. So far there is no sign of life from Trotsky, Bukharin, Zinoviev and all the other Bolshevik victims of the grisly thirties let alone any of the countless swarms of anti-Bolsheviks and non-Bolsheviks. Presumably they must rot unhonoured and unmourned.

It may be instructive to take a look at a recent example of the rehabilitation business, that of Pavel Dybenko. As the papers were not slow to point out, added interest attaches to this case because Dybenko was the basis of one of the important and tragic characters in a famous work of fiction— Koestler’s Darkness at Noon, a novel about the purge trials of the Stalin Terror (a book that is well worth reading even though its central thesis, that the false confessions made by leading Bolsheviks before being butchered were the result of ideological devotion to the Soviet system at all costs, was false; as Krushchev has since shown, the simple explanation was quite good enough—they were extracted by brute force and barbaric torture). But apart from that, the case of Dybenko is of fascinating interest in that it shows the degeneration of a hero who has hitched his waggon to a false star and therein lies a lesson about the falsity of the old maxim—"the end justifies the means."

Dybenko first became news in 1915 when, as an ordinary sailor, he led a mutiny on a Tsarist warship on the Black Sea and it was, therefore, not surprising when he figured prominently in the fighting in Petrograd in the 1917 Revolution. He was by then a leader of the rebellious sailors of Kronstadt, the famous naval station near the then Russian capital (now Leningrad). The very name of Kronstadt has a terrible irony in this context. Dybenko led the sailors in their revolt against Tsarism, an undoubted tyranny, but he and his comrades used their strength to help the Bolsheviks overturn both the Tsarist tyranny and the Provisional "Liberal" government of Kerensky and substitute an iron dictatorship of the Communist Party whose yoke is still firmly around the neck of the Russian proletariat to this day.

From this stage the story of Dybenko takes a bizarre turn. After the Bolshevik victory in November, 1917 (with its accompanying massacre of the young cadets and the women soldiers in the Winter Palace along with the murder in a prison hospital of two defenceless members of the Provisional Government) the next stage was the calling in January, 1918, of the Constituent Assembly which the Bolsheviks had, not without some justification, accused the Government of delaying.

From all corners of Russia the delegates came to the Parliament which was going to give Russia its new democratic government. But there was a flaw. The new Parliament had an anti-Bolshevik majority and elected an anti-Bolshevik chairman. This sort of democracy did not suit Lenin and the Bolsheviks who had control of the armed forces in Petrograd, so the Assembly was broken up—an inglorious end to the first relatively free election in Russia's tragic history and, of course, the last.

But whilst the sailors of Kronstadt contributed to the Bolshevik victory, they soon came to realise that they had blundered; that there was no semblance of liberty or democracy in the regime they had helped to create. In due course this led to the Kronstadt mutiny of 1921, the last open act of defiance by any Russian body of men against the new tyranny. This mutiny posed serious problems for the Communists and for Trotsky, their commander-in-chief, for the Kronstadt sailors were strong both in arms and men and in addition they had the revolutionary prestige attaching to the heroes of 1917. The problem was duly solved by the classical mixture of force and fraud that is inevitably used by ruling cliques whenever their position is threatened, whether they call themselves Communist or anything else. And who were the leaders of the Red Army which crushed the mutiny? Firstly General (later Marshal) Tukhachevsky and, at his right hand, the same Pavel Dybenko who had formerly been the outstanding figure among the sailors but who was now a member of the ruling clique and the husband of the famous Bolshevik Madame Kollontai. And it is instructive to note that all this took place not under Stalin, the so-called betrayer of the Revolution, but in the heyday of Trotsky and of Lenin himself.

The subsequent story of our "hero" only shows the sad progress of his decline into a vicious instrument of tyranny. He became the President of the Military Court—one of Stalin's hanging judges. And his most famous victim in that role? None other than the same Marshal Tukhachevsky with whom he had helped to crush the sailors of Kronstadt. The Marshal, who had become the C-in-C of the Red Army, had fallen foul of Stalin's megalomaniac fury and himself became a sacrifice to the executioner along with his wife and family—a grisly monument to Stalin’s "Communism” which, of course, evoked never a bleat of protest from the Communist Parties of Great Britain and the other western countries.

Finally Dybenko, having betrayed and butchered his former comrades in the service of this monstrous travesty of Communism. himself found that he was caught in the net and in 1938 duly paid with his life in the Stalinist blood-bath. The lesson of all this bloodshed and double-dealing? Surely, none other than that no amount of heroism and even of sincerity (for it is certain that people like Dybenko at first believed in the rightness of their actions) can bring Socialism in a world where, as in Russia, the mass of the people do not understand or want it. The idea that a minority of Communists could lead the uneducated masses into the promised land was condemned as dangerous futility in these pages nearly 50 years ago. And how tragically the Russian workers have paid in blood and suffering for their folly.

And what of the present? Does anyone really believe that Krushchev is leading the Russian State Capitalist machine towards Socialism? Why, only recently he was quoted as denouncing the principle of equality in wages which had always been an ostensible goal of the Bolsheviks, and defending “differentials" (and what differentials!) like any good capitalist. And whom does his regime rehabilitate when it condemns the days of Stalin? Democratic heroes? No, Communist murderers, the victims of other Communist murderers. And still the repression goes on as the executions for "economic crimes" and the continued barbaric imprisonment of people like the mistress of the writer Pasternak, and her daughter, abundantly testify.

One day, in Russia as in the rest of the world, there will be a Socialist revolution. But it will take place as a result of a majority of thinking Socialists deciding to end the capitalist regimes in all countries, not least in the Soviet Union.
L. E. Weidberg

weidberg's knowledge of past events during the early soviet history era demonstrates some often made assumptions that are historically inaccurate. His article lacks a truthful understanding of events as they occurred...but one can not fault weidberg...russian history is riddled in doublespeak...one has to dig deep to acquire a true understanding of how life and actions of individuals would come to be defined.
As in the case of Dybenko...
During the year 1917 Dybenko was not one of Lenin's "professional revolutionaries"
In fact, Lenin knew a successful insurrection would be impossible without the support of the Baltic Fleet...and it was Lenin who sought out the support of Dybenko...Dybenko cared little for elite intellectuals...ask Kerensky.
Lenin sends to Dybenko at the main base of Helsingfors (not Kronshtadt) Anton-Ovesseenko, Raskolnilov, and the temptress Kollontai.
All worked to seduce Dybenko into supporting Lenin. Dybenko's days in Kresty during July accentuated this seduction as Kamenev, Lunarcharsky, and Trotsky worked on the soul of Dybenko. So what were these comrades of Lenin doing?...demanding the sailors leader (Dybenko was Chairman of the freely elected Tsentrobalt) to support an oppressive regime...an authoritarian government?...of course not...it borders on the ridiculous to assume Dybenko and the sailors would have supported such a platform. Dybenko was hoodwinked...as was the masses who took to the streets of many Russian cities demanding representation...Lenin perpetuates immense fraud holding fast to his heart the desires of many Russians..only to squash their belief of social change...Lenin was no socialist...simply a blood thirsty man who desired power...Trotsky no different...A conflict between Dybenko's design for a representative government and Lenin's opportunistic vanguardism was imminent...Dybenko loses...becomes dust under the rug of historical significance. Removed from historical record and cast as a "loose cannon" and "drunkard"...Dybenko found himself to be a "man without a country"
"The armed fist of the revolution" in the person of Dybenko, the Russian Navy and the Soviet Tsentrobalt - had to be destroyed and, like everything else in Russia, to submit to the Executive Committee and the people's dictatorship.
Dybenko became a slave of the Soviet government, which he hated, but which he still served...

on a final note...the events of Kronshtadt 1921 are horribly despicable no doubt...Dybenko played a role no doubt...but when discussing Russian History...look beyond the curtain...find out who Alexander Sedyakin was...delve deeper than a cursory glance...one might find as a famous radio announcer would say, "the rest of the story"