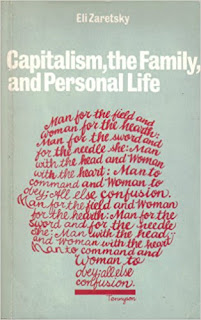 Book Review from the July 1976 issue of the Socialist Standard

This short book was first published as a series of articles in Socialist Revolution (California) in 1973. Eli Zaretsky argues that while work outside the home has largely freed women from patriarchal constraints, the basis for their oppression now lies in their responsibility “for maintaining a private refuge from an impersonal society”. Work in the home is part of the economy, and there is increasing emphasis on “personal life” as something experienced outside work and society.

Zaretsky acknowledges the influence on his thinking of the women’s movement and “socialist currents”. This influence is obvious in his criticism of Marx and Engels. His book illustrates the confusion which arises from the failure to understand Marxian economics and the consequent absence of a clear definition of Socialism.

We read that Marx and Engels failed to see the necessity for dealing with “personal life”, including the oppression of women by men in the home, as a separate issue. Instead they believed that once individuals were freed from economic exploitation they would arrange their private lives according to earlier ideals of domestic and personal fulfilment. But: “The development of capitalism destroyed this hope and to a great extent ‘separated’ the socialist movement from the subsequent development of the family and of personal life among the proletariat” (p.63). In Russia and China the emancipation of women was part of “the ‘emancipation’ of the productive forces of society”, (p.106). Zaretsky claims that the experience in these countries, particularly China, demonstrates the “relevance of Engels’s emphasis on entry into social production to the emancipation of women.” However, the gains in personal freedom have been qualified — “substantial by the goal of developing production”.

In America, apparently, Engels’s idea of resolving the oppressiveness of the family by “revolutionizing the mode of production” has appeared “less and less plausible”. Despite the material benefits of a modern industrial society, education, the possibilities for economic independence and easier housework, women are still oppressed by their responsibilties in the sphere of personal life.

Certainly Engels did say that the emancipation of women becomes feasible when they can take part in social production and “when domestic duties require their attention in a minor degree”. But in looking to a time when women would no longer be economically dependent on men he did not mean by taking a job! He wrote of the full freedom of marriage becoming general after all economic considerations "have been removed by the ABOLITION OF CAPITALISTIC PRODUCTION and of the property relations created by it” (The Origin of the Family, p.99, Kerr edn.).

Marx saw that in giving women and children a decisive role in “the socially organized process of production”, a rôle to be fulfilled outside the home, large-scale industry was forming the economic foundation “for a higher form of the family and of the relations between the sexes”. However, in the same paragraph (Capital Vol. 1 p.496, Unwin edn.) he points out that in capitalism where the worker exists for the process of production, instead of this process existing for the worker, “it is a pestiferous source of corruption and slavery”.

Marx and Engels were looking at conditions in the 19th century, but they would not have been fooled by the undoubted improvements in working and social conditions which have since taken place (the relaxation in the tension of “the golden chain”). Within capitalism they saw the immense possibilities for the future of human relationships. But they did not expect this potential to be fully realized until after the revolutionary change from capitalism to Socialism. This revolution has not yet taken place. There are no Socialist countries!

The SPGB has never been in doubt about the class position of women — or the way to their emancipation. Most women, like most men, belong to the class which owns no part of the means of production, the working class. Their position in this class is not dependent on their being employed. (This definition is obviously not restricted to industrial workers.) There are many reasons for opposing capitalism. The limitations it places on the “personal life” of the majority is one of them. The oppression of women may pre-date capitalism but so do war and poverty. It is capitalism which now prevents their solution and the answer is obvious.

Working-class men and women must organize consciously and politically for the speedy establishment of Socialism. Then when social production is combined with common ownership of the means of production the whole of mankind will be freed from economic exploitation. Common ownership will mean production solely for use and free access to the social wealth. Surely the prerequisite to the arrangement of social production and personal life according to human interest and individual choice. Emancipation indeed!
Pat Deutz