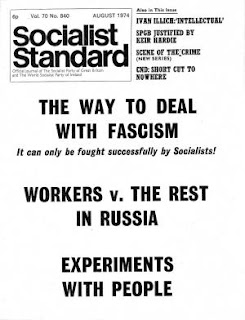 A recent recruit to the band of self-appointed leaders of the thoughts of men is Ivan Illich. There are several hallmarks of the recent intellectual. A passionate love of long words where short ones will do, is one. An exaggerated notion of their own importance is another. A third, and this is the most crucial, is their utter lack of understanding. That is what makes them so dangerous to workers already confused by the political opportunists of the left. Illich certainly fits the bill.

As the co-founder of the Centre for Inter-Cultural Documentation in Cuernavaca, Mexico, Illich seems to have a ready press for his ideas. His book, Deschooling Society, caused a minor explosion in the education world when it was published a few years ago. For those who do not have the time (or the patience) to read his “shrewd and passionate arguments” (The Guardian), BBC Radio 3 broadcast a long interview with him in April of this year. You can’t avoid him.

In the interview Illich explained his basic position, in this way:

It is my hypothesis that when the tools for production exceed a certain measure, they impose exploitative relationships on the society, no matter what political choice in ideological terms, the society thinks it has made.

In other words, he is saying it is the size of the productive and other “processes” (e.g. the education system) that is the cause of society’s problems. His favourite illustration is to compare the bicycle with the motor car. A “convivial society” he says

. . . can only arrive on the bicycle. With shoes alone we are not efficient enough. And with cars we are already over-efficient and impose an exploitative mode of production on the entire society.

Many intellectuals are obsessed with one small aspect of capitalist society; Illich’s obsession is the bicycle. In his long essay Equity and Energy he states: “The bicycle is the perfect transducer to match man’s metabolic energy to the impedance of locomotion.” (It takes an intellectual to make a simple statement, that the bicycle is a mechanically efficient machine, as confusing as that.) He is urging that it is necessary to return to a simpler form of life.

Like most intellectuals, Illich, is looking at society upside down. It is not the size of the productive processes that is the cause of the problems, but the object of the productive processes and people’s relationships to it and each other. The products that come off the production line belong to the capitalist (the individual, the shareholder, the company, the government—it does not matter which). But the capitalist has not actually made the products. It is the workers who have produced everything, in whatever capacity they have worked whether as manager, machine operator or floor sweeper, but do not own the products they have made.

This relationship results in a struggle between these two groups in society — a fight over the means of subsistence. The capitalist at the end of the production process has his commodities which he has to sell in order to make his profit; the worker has his wage, which is only sufficient to keep him and his family going from week to week. Now looked at that way, what does it matter if bicycles are produced — or motor cars or jam-pots or steam-rollers ? The net result is the same, a society of conflicts. The interest of the capitalist lies in extracting as much fat as he can out of the worker. That is where his profit comes from. The interest of the worker is in obtaining as high a wage as he can from his employer. That is what determines his level of subsistence and therefore his access to wealth.

It is on the basis of production for profit that cars are produced to snarl up the cities and pollute the air. Illich is right to point out the appalling effects on the planet we inhabit, but it is the profit system that draws forth cars from the witches’ brew of capitalism. Merely urging people to go back to bicycles is about as sensible as King Canute ordering back the waves.

Illich stated in the interview that the “convivial society” he wants can only be “a society which opts for voluntary poverty.” In other words he wants to abandon technological progress and put everyone in rags on a bicycle. For several reasons this is childish:-


Illich ignores that car manufacturers exist to make profits, not cars, so car production continues notwithstanding some deadly side-effects.

When technology is harnessed to the object of satisfying human needs there will be no need to fear it. It is only because of the advances in technology that it is now possible to organize society in such a way that poverty and deprivation can be abolished. It is not technology that stands in the way of man’s advance, but the present system of wealth ownership.

Illich is now living in a Mexican Village. Presumably he has his head buried in the sands of the Mexican desert. Workers must learn to treat the ideas of such intellectuals with the contempt they deserve. A “convivial society” cannot be achieved by pedalling on a bicycle. Capitalism itself must be abolished, and a society based on common ownership must be established in its place. This is the task of the working class. It demands not leaders or intellectuals to show them how to do it, but the conscious understanding and commitment to Socialism of the working class itself. It is not the leaders or lefties or intellectuals that are needed, but Socialists.
Ronnie Warrington
Posted by Imposs1904 at 2:26 AM

The mid-seventies Socialist Standard and its insistence on bolded paragraphs.