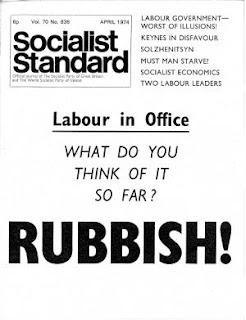 From the April 1974 issue of the Socialist Standard

Professional politicians never confess. When, after years in office, they are thrown out by disgruntled electors they never make frank admission that the mess they leave behind must have been their fault. Instead they blame it on the Opposition, or the trade unions, or the cantankerousness of foreigners or on the bad advice given to them by their advisers, the top civil servants and economists.

In this the politicians differ from the economists because quite a lot of the latter have recently been confessing that they were wrong. The difference, however, is not great because what the economists are doing is to blame it all on Keynes.

For most of them, Keynes was the New Messiah. Did he not show them how capitalism could be managed, how unemployment could be abolished along with crises and depressions? not forgetting that Keynes was supposed to have proved Marx wrong about capitalism.

What most of all created doubts in their minds about Keynes was the way “full employment” policies failed to prevent unemployment rising by hundreds of thousands, first under the last Wilson government and then under the Heath government which came into office in 1970.

Faced with the rise of the registered unemployed to over a million in the spring of 1972, a Financial Times editorial threw Keynes overboard:

Both the Treasury and the House of Commons Expenditure Committee were united in the assumption that unemployment could be determined by demand management and exchange rate policy at almost any figure the government regarded as prudent. But in so doing they were reflecting an orthodoxy, which may be as out-of-date as the opposite orthodoxy against which Keynes was battling in his lifetime.
(22nd Sep. 1972)

But if the economists abandoned Keynes entirely, what could they put in his place? So the line taken by many of them is to try to re-arrange the pieces and build up variations on the old “Keynesian orthodoxy”.

Cambridge, Oxford and Edinburgh Universities have all joined in an involved controversy about the advice given by The Times to the Chancellor of the Exchequer for the next Budget. It led Professor Little of Oxford to accuse Professor Neild of Cambridge of “Keynesian orthodoxy”, to which Neild wrote a reply (Times 26th Feb.) which contained the following:

I and a number of my colleagues at Cambridge believe that the orthodox view, to which many of us used to subscribe, is wrong and that its application in policymaking has been a major cause of Britain’s post-war economic troubles.

Professor Little had already concurred with this: “At any time between ten and twenty years ago, I would, if asked, have agreed to sign this part of Professor Neild’s letter” (Times, 6th Feb.).

From all of which we gather that the professional economists went on for years recommending policies which they now confess were “a major cause of Britain’s post-war economic troubles”. It will be noticed, not a word of regret and remorse.

And of course they are still wrong. Capitalism, with or without the advice of orthodox or neo-Keynesians, or Milton Friedman or Galbraith or any other economist, never did operate and never will operate in the interest of the working class.
Edgar Hardcastle
Posted by Imposs1904 at 5:29 PM