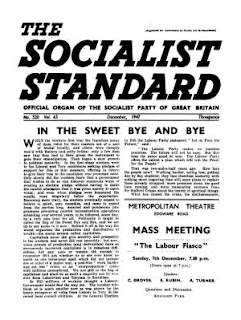 Party News from the December 1947 issue of the Socialist Standard

The Metropolitan Theatre, Edgware Road, London, has one of the party's most ambitious propaganda meetings on Sunday evening, December 7th (see notice). Everyone is asked to give this meeting wide publicity. Members and sympathisers can do a lot towards ensuring a packed house if they see to it that workers who are likely to be interested are told about the meeting and asked to come along. Scientific socialism is now well on the political landscape and we can bring it more to the foreground on December 7th if all of us do our best.


The Outdoor Propaganda Campaign this summer has been extensive and produced good results as shown by reports coming in from branches. Nearly all branches have had a meeting each week, and some two or three. The Propaganda Committee’s report at the end of the year on this aspect of the party’s work will be a stimulating document.


The Party membership increases steadily, as it has done year after year. There is nothing spectacular in this growth, but our gains are solid. Our membership figures do not show the violent fluctuations which are a feature of political organisations who chase the reformist “will o’ the wisp.” We build on the very firm foundation of the understanding of class-conscious workers.


The Party Funds Committee ask branches, members and sympathisers to divert contributions they wish to make to special Head Office funds to the new ‘‘Pamphlet Publication Fund” for the time being. We want to reach our £500 target quickly to pay for the two new pamphlets at the printers, and when this is done we can concentrate again on the Parliamentary and other special funds..


The two new pamphlets, the “Racial Problem” and the ”Communist Manifesto” (with a special party preface) will cost 1s. 0d. each when ready. They are both substantial pamphlets in every sense of the word and are excellent value for the money.


Post-war Fascism in this country had Raven Thompson (Director of Policy for the British Union of Fascists before the war) as its champion in the debate at Kensington Town Hall on November 10th. This debate was organised by our Ealing branch. Thompson represented the Union for British Freedom, one of the groups aping the Nazis here. This organisation offered to supply stewards to keep the meeting in order, including some to prevent “undesirables” getting into the hall. We naturally refused their offer and told them that our meetings were open to all members of the working-class who wished to attend, and that we did not anticipate any disturbances at a meeting run in our customary democratic manner. Our views were justified. The hall was jammed to capacity with 650 people and about 200 had to be turned away. A large number of those present were passionately opposed to Thompson but they listened patiently while he plodded along with a monotonous and boring recital of the mish-mash of reformist rubbish and dictatorial junk which comprises the stock-in-trade of the present day little Hitlers. Our representative, Turner, had no difficulty in ripping Thompson’s tattered political ideas into even smaller pieces with socialist analysis, and presented our alternative to Fascism and the rest of the political policies which in effect preserve the present social system. Another lesson of the debate is that a sure way of preventing the spread of Fascist doctrines is to get these would-be strong men and dictators on to a public platform and expose them for the exploded political wind-bags which they really are. Those organisations who claim a monopoly of so-called “anti- fascism" were shown by Turner in the debate to be based on the same reformist twaddle as the Fascists themselves, and they can only oppose with disruption and disorder—tactics which the Fascists welcome and by which they thrive. The audience were orderly throughout and gave about £24 to our funds.


Hackney Branch challenged Hamm, of the neo-Fascist organisation which has achieved notoriety at Ridley Road, to debate. He accepted subject to two conditions—his opponent to be a “Gentile,” and his organisation to provide stewards. As we do not know what, in the modem usage of the word, a ‘‘Gentile” is (nor does he), we declined. Hackney were also suspicious of the probable methods of his stewards. If he wants to debate with us any member we care to put up will be good enough for us and too good for him., Hackney branch’s Friday evening lectures at the Bethnal Green Central Library, Cambridge Heath Road, are well repaying the effort put into them. They continue throughout December, with the exception of December 26th. After Christmas and until the end of March these Friday lectures will be devoted to economics. The branch propose to base them all on various aspects of the first volume of ”Capital.” A debate has just been arranged with the Trotskyists at Bethnal Green Central Library on Monday, December 15th, at 7.45 p.m. Our representative will be H. Young.


Manchester Branch have now completed an excellent outdoor propaganda season and their first series of Sunday evening lectures at the Rusholme Public Hall was well supported. This first series consisted of four lectures on fundamentals of Marxism. Another series on vital questions of the day is now in progress on Sunday evenings at the same hall.


Lewisham Branch have an attractive series of open discussion meetings on Monday evenings, up to December 29th. These are being held at the Co-op. Hall, Davenport Road, Rushey Green, Catford, at 8.45 p.m. The subjects cover a very wide field, and plenty of time is given to members of the audience to put their own points of view.


Ealing Branch are keeping their outdoor propaganda outpost at Earl’s Court Station going through the winter. Lively meetings arc guaranteed here, some of the opposition coining from relics of Victorianism whose views on socialism make a queer mixture of ”free love,” ‘‘Red riot,” plus some nationalisation. In spite of this be-whiskered opposition literature sales and collections are good, and useful contacts with interested workers are being made. The Branch are following up their Ealing Town Hall meeting on November 26th with a meeting at the L.C.S. Rooms. Parkfield, South Ealing Road, on Saturday, December 6th. It will deal with the “Housing Question” and is timed to begin at 7.30 p.m.


Bloomsbury Branch’s most successful series of Sunday evening lectures is running at the Trade Union Club, Great Newport Street, W.C. The hall is jammed every Sunday. The arrangements for December are as follows. On December 15th E. Wilmott will speak on "The Development of Modem Capitalism”; on December 21st G. Deane on “Has the Labour Party a Way Out?” and on December 28th S. Cash on “Socialism.” There will he no meeting on December 7th in view of the mass rally at the Metropolitan Theatre.