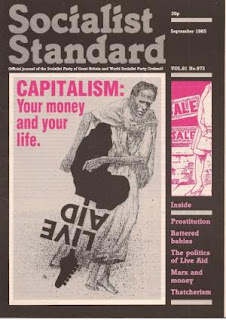 From the September 1985 issue of the Socialist Standard

Palmerston died in December 1865, shortly after his Liberal Party won the general election of that year. The way was now clear for a second Reform Bill to further extend the franchise, which it was widely agreed was necessary even if there was disagreement about how this should be done and how far it should go. The new Prime Minister, Lord John Russell, lost no time in having one drafted and presented to Parliament, in March 1866.

Agitation for the extension of the franchise had begun some years previously, both among the capitalist class and the working class. A Trades Unionists' Manhood Suffrage and Vote by Ballot Association had been established in 1862 (with which Ernest Jones who, after the disappearance of the People's Paper had resumed his profession as a lawyer in Manchester, was associated). Its chairman was George Odger, a shoemaker who was also the part-time secretary of the London Trades Council that had been established as a direct result of the London building workers' strike and lockout of 1859 60. Odger was one of the new generation of working class militants which this strike had brought to the fore. Among the others were Robert Applegarth, who became the secretary of the Amalgamated Society of Carpenters and Builders in 1862. and three other building workers: William Randal Cremer, George Howell and George Potter. Potter, who had been appointed manager of the Bee-Hive, an influential trade union weekly, when it had been started in 1862, was the most militant of this group on trade union matters and soon fell out with the others and so was not to be associated with their political initiatives.

But it was John Bright, with his National Reform Union, who got the renewed suffrage agitation off the ground. Although the National Reform Union campaigned for a ratepayers suffrage (those who paid the local property tax) and not the traditional working class demand for universal suffrage, its campaign enjoyed considerable trade union and working class support. Links between Bright and the new generation of trade union leaders had been made during their joint campaign in favour of a Northern Victory in the American Civil War. [1] Marx, who was an enthusiastic supporter of the North, had himself attended one such meeting in March 1863 addressed by Bright and also by Odger, Cremer and Howell.

With his break with Ernest Jones in 1857 Marx lost his link with the English working class movement (though he remained in contact with the German workers' movement in Britain through the German Workers' Educational Association (Deutscher Arbeiterbildungsverein). This link was restored in 1864 when in September Marx accepted an invitation to be present on the platform at a meeting organised with a group of French workers from Paris by Odger, Cremer. Howell and others to discuss international co-operation. In the past Marx had always refused such invitations since he had a generally low opinion of his fellow political refugees from the Continent in London. But he accepted this time because he realised that those involved, on both the French and British sides, were of a different calibre from the Continental refugees whose posturings he knew only too well.

The September 1864 meeting led to the formation of the International Working Men's Association (IWMA). Odger became its first President and Cremer its Secretary. Marx was one of those appointed to draw up a manifesto and rules for the new association. He ended up doing both, virtually on his own. Besides the trade union leaders, the English members of the IWMA also included old Chartists like Benjamin Lucraft (also a trade unionist) and Owenites like John Weston. In 1867 the O'Brienite organisation — the National Reform League (O'Brien himself had died earlier in 1864) affiliated to the IWMA. So there was a direct link with earlier British working class movements and theories.

In April 1865 the formation of a Reform League, [2] under the presidency of a reformer, Edmond Beales, was announced. The League stood for universal manhood suffrage and was dominated by members of the General Council of the IWMA with Howell, a Council member, as its secretary. Marx was very pleased with this development, seeing the Reform League as a sort of revival of Chartism, especially as its demand for universal suffrage made it a rival of Bright's National Reform Union.

But, as on so many other occasions, Marx's confidence was to be misplaced. When the Liberal government published its Reform Bill in March 1866, the Reform League decided to support it on the grounds that it was a step in the right direction, even though it did not even provide for a ratepayers' suffrage, let alone universal suffrage. What it did propose was a reduction of the property qualification, to a level low enough to enfranchise a considerable number of workers. Marx was very disappointed and wrote to Engels on 2 April 1866 about "the cursed traditional character of all English movements" having appeared, according to which a measure is hailed as a victory merely "because the Tories cry: guard".

The Liberal Bill, however, was defeated, not by the Tories alone but as a result of a defection of a number of Liberal MPs. The government thereupon resigned and Queen Victoria asked Lord Derby to form yet another minority Tory government. Following the defeat of the Liberal Bill, agitation for Reform broke out with renewed vigour. The Reform League called a mass rally in Hyde Park for 23 July; the government responded with an order banning the rally. The League refused to accept this ban and on 23 July marchers from all over London converged on Hyde Park. Refused admittance, most of them went on to Trafalgar Square where a short meeting was held. Some, however, stayed at Hyde Park, pushed the railings down and entered. This “riot” was a clear warning to the new Tory government as to what was likely to happen if they tried to resist Reform. They got the message and the following year Disraeli presented the Conservative government's own Reform Bill, which was considerably expanded during its passage through the House of Commons.

The 1867 Reform Act, and the corresponding measures the following year for Scotland and Ireland, introduced household suffrage (for male heads of household) in the towns, increasing the electorate by over a million from 1,350,000 to 2,470,000. Most of the new voters were members of the working class, even though most workers were still left voteless. But a situation had been created — a working class majority among the electorate in most urban areas — which led Marx to later conclude could permit a peaceful capture of political power in Britain by the working class once it had become socialist-minded.

The working class, however, was at this time far from being socialist-minded. Odger, Cremer. Howell, Applegarth and the others did not even claim to be socialists. They were working class Radicals, that is, working class supporters of the Radical wing of the Liberal Party, the party of the industrial capitalist class. They felt that the best way to pursue the interests of the working class was to work through the Liberal Party, a point of view that was to be shared by most trade union militants for the next thirty to forty years. Odger, Cremer and Howell were Liberal candidates in the 1868 General Election (as, indeed, was Ernest Jones who died later on that year). [3]  When the Reform League was dissolved in April 1869, its leading members were to be found in the Labour Representation League which was founded later that year. But despite its name, the aim of this new organisation was not to secure "labour representation" as such in Parliament, but "labour representation" in Parliament through the Liberal Party.

Although none of the trade unionist Liberal candidates were elected in the 1868 elections, the Liberal Party did win. Gladstone became, for the first time, Prime Minister and gave Bright a post in his Cabinet as President of the Board of Trade. The new Liberal government proceeded to carry out the reforms which had been held up for at least a decade pending the extension of the franchise: recruitment to the civil service was made subject to passing an open, competitive examination; the purchase of commissions in the armed forces was abolished; the universities of Oxford and Cambridge were opened to other than those who professed the established Anglican religion. All these changes went in the direction which Marx had said was sooner or later inevitable; the aristocrat-dominated state machine was being remodelled into a capitalist state. In addition, the law on trade unions was liberalised and an Education Act in 1870 introduced compulsory primary education for all children. Similar changes were made in Ireland: the Anglican Church was disestablished and a very timid Tenants Rights Bill passed, an attempt to reform the universities failed however. Ireland was, in fact, beginning to emerge as the issue that was to bedevil British politics until the 1920s. In 1867 there was unrest in parts of Ireland led by the Fenians, extreme Irish nationalists. The government replied by arresting the Fenian leaders in both England and Ireland. In November some Fenians attacked a police van in Manchester and released two of their leaders, killing a policeman in the process. Five Fenians were sentenced to death for this attack, and three of them were executed. Both the Reform League and the IWMA — particularly Marx himself — were involved in the campaign against this and a subsequent campaign for better treatment for the Fenian prisoners.

In 1872 a second [4] of the Charter's six demands was enacted: vote by secret ballot. The first election by ballot, however, resulted in the defeat of the Liberals and a victory for the Conservative Party. Gladstone thereupon resigned both as Prime Minister and as leader of the Liberal Party and Disraeli became Prime Minister for the first time. The new Conservative government did not go back on the reforms enacted by the previous Liberal government, on the contrary, it continued the policy of reform in the interest of the capitalist class. Local government. public health, housing, the law on picketing by trade unionists, the Factory Laws were all reformed and modernised. In foreign affairs, the Eastern Question reared its head again with a new war in 1877-8 between Russia and Turkey. Queen Victoria was proclaimed Empress of India. In the 1880 elections the Liberals again emerged as the majority party and Gladstone again became Prime Minister. Gladstone's second Liberal Ministry was still in office when Marx died in March 1883.

In many respects British politics after 1868 — the capitalist class becoming the politically ruling as well as the economically dominant class — were more interesting than in the previous period. Unfortunately, we do not have for the 1860s and 1870s the same detailed commentary on political events in Britain as Marx's journalism had provided for the 1850s. Marx was, as we shall see, fairly active in British politics from 1864 to 1872 but he has left us nothing for this period comparable with the articles he wrote for various papers from 1852 to 1862.
Adam Buick

[1] Potter had a different position: he held that the workers should not take sides as this was a war between the partisans of chattel slavery (the South) and those of wage-slavery (the North) between which there was nothing to choose.
[2] Not to be confused with the O'Brienite National Reform League mentioned in the previous paragraph.
[3] Cremer was later elected a Liberal MP and ended his life as Sir Randal Cremer, winner of the Nobel Peace Prize.
[4] The first, the abolition of the property qualification to be an MP. was removed in the 1850s.