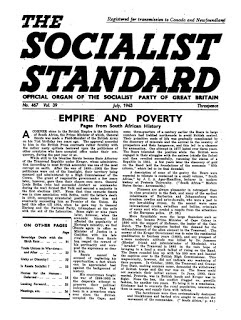 From the July 1943 issue of the Socialist Standard

What sort of world awaits the working class after the war? Will it be a brand new world free from class privilege and wage-slavery; a world of social equality, security and happiness? The so-called progressives of all political colours have indulged in unlimited crystal-gazing, but no tangible blessings for the workers have emerged out of their Utopian vapourings. Certainly, President Roosevelt has said that he is looking forward to a world freed from want, but he carefully defines it as "economic understandings which will secure to every nation a healthy peace-time life for its inhabitants." (Message to Congress, January 6th, 1941.) So, after all, we are not going to have the common ownership in the means of life, and production for use; merely "economic understanding."

The President also said that he stood for the ending of special privileges for the few, though he did not propose the abolition of rent, interest and profit. It is quite evident that Roosevelt does not consider the exploitation of one class by another as a "special privilege." To him and his supporters the making of profits is a necessary condition for progress and civilisation. In the same message to Congress he also expressed himself in favour of bringing more citizens under the coverage of old-age pensions and unemployment insurance. We can, therefore, expect, as he expects, that in the new world where want is to be abolished, there will also exist large numbers of elderly working-class paupers and jobless dole-drawers.

In another celebrated message, this time to I.L.O., held in. New York in 1941, he observed: "If that world is to be one in which peace is to prevail, there must be a more abundant life for the masses of the people in all countries. There are so many people in this world who have never been adequately fed, clothed and housed. By undertaking to provide a decent standard of living for these millions, the free peoples of the world can furnish employment for every man or woman who seeks a job."

We think the President is mistaken. There are certain facts he has overlooked. Firstly, what the workers receive as wages, high or low, represents only a part of what they have produced. Secondly, assuming a higher standard of living for these inadequately provided millions, the resulting increase in the speed and efficiency of industry would leave the workers in a relatively worse position, and suffering conditions of more acute insecurity. Experience has already proven that an increasing demand for goods will not necessarily prevent increasing unemployment, and the prospects of employment for every man and woman who seeks a job are a remote possibility under capitalism. Employers are only willing 'to give the workers more wages when they can anticipate more profits out of them, and they are not prepared to allow production beyond the point where it ceases to be profitable. Surely, the President must know that in his own country, where wages are the highest in the world, unemployment and starvation were prevalent!

Examining the more concrete pronouncements of American spokesmen, one can see their anxiety to establish post-war conditions wherein their goods will be able to penetrate to every country in the world. For example, Mr. J. G. Winant, speaking at Liverpool University, November 26th, 1941, said: "Divergencies between Great Britain and the United States might easily arise if each country insisted on becoming as self-sufficient as possible in respect of producing goods of outstanding importance in war-time. This policy would necessitate the production at high cost within one country of goods which could be produced at much lower cost in the other country, and this would involve the erection of serious obstacles to trade." In plain words, Mr. Winant demands a free field and no favour, on behalf of American capitalists. On the other hand, British interests, being at a disadvantage with their American rivals, prefer to be reticent on this important subject. No doubt, after the war, they will become very voluble, as their interests may determine.

Another gentleman, Milo Perkins, Executive Director of the U.S. Board of Economic Warfare, in a speech on May 25th, 1942, delivered himself of the following:


"The greatest untapped markets industrial capitalism has ever known will open up before us. Their development will be the one hope for our profit system. Industrial capitalism cannot survive without those markets. Of Course, it won't be easy. . . . There will be the problem of how to get purchasing power into the hands of potential customers so that they can become real customers. . . ."

He does not say exactly how all this is to be done, but he dwells on the virtues of “faith in the future of our country . . .  a new buoyancy . . .  a sense of adventure."

Mr. Churchill's recent speech gives a good pointer to what the workers may expect when the blood-letting is finished. He said:

". . . we must beware of attempts to over-persuade or even coerce His Majesty's Government to bind themselves or their unknown successors in conditions which no one can foresee, and which may be years ahead, to impose great new expenditure on the State without any relation to the circumstances which might prevail at that time, and to make them pledge themselves to particular schemes without relation to other extremely important aspects of our post-war needs. . . . Therefore, I tell you round your firesides to-night that I am resolved not to give or to make all kinds of promises and tell all kinds of fairy tales to you who have trusted me and gone with me so far." (Daily Telegraph, March 22nd.)

Thus our masters, through their spokesman, are here saying quite plainly that they don't intend to give the workers anything now, and that they will not bind themselves to any definite promises for the future.

The motto of the Curzon family, "Let Curzon hold what Curzon has," is applicable to the whole of the property owning class, and it must necessarily be so for obvious reasons.

Now contrast Mr. Churchill's cautious utterances with the free and easy attitude of Sir Kingsley Wood on the occasion last year when he asked for another thousand million pounds for war purposes. He told the House that “our" total expenditure during this war has already reached the astronomical figure of £8,600 millions. He added: "This is by far the costliest war in history. But this does not dismay us. There will be no faltering in the financial or any other sphere." (Our italics.)

Let the workers consider for a moment the immense amount of wealth that is being expended for the purposes of destruction, and then let them reflect how easy it would be to organise society on a basis that would give each individual a civilised existence. The vastness of the wealth wasted on war is evidence of the vastness of the world's industrial and mineral resources.

But we might well ask Mr. Winant a few very pertinent questions. It was just as easy to build houses before the war as it is now to build tanks and battleships. Then why were those houses not built?

Mr. Winant can only reply that there was something fundamentally wrong, but he does not say what it is that is wrong. We can tell him. It is the private ownership in the means of life, and the fact that food and clothing and houses are primarily produced to make profits for the capitalists, and NOT to satisfy human wants. When the fields, the factories, the mines, and all the means of producing and distributing wealth are placed into the hands of society, only then will human wants set the machinery of industry into motion.
Kaye.