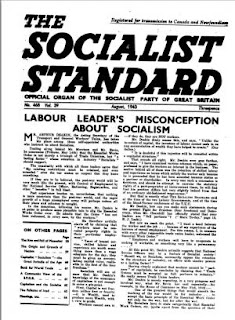 From the August 1943 issue of the Socialist Standard

We Socialists are constantly urging workers not to judge persons or political parties by labels. It is this free acceptance of terms or words used to describe political opinions and policies that is responsible in no small measure for the confusion and misunderstanding which exists in the minds of workers everywhere to-day.

If there is one tag used more often and indiscriminately than any other it is the label of "Socialism,” and it is only by a critical examination of the various nostrums put forward by pseudo-Socialists that the bankruptcy of their claims are revealed.

A case in point is that of Dr. C. E. M. Joad, who has on many occasions stated he is a Socialist. Dr. Joad is a man who receives much favourable publicity from the Press and the B.B.C. and who has come to be regarded with a great deal of respect by large numbers of workers who fall easily under the spell of erudite and fluent speakers. He is a member of the Brains Trust and a man of undoubted ability in certain spheres, but Socialist knowledge is not one of his assets. This is made clear in an article in Reynolds of April 18, in which Dr. Joad gives his reasons for aspiring to enter the post-war Government as a Labour member. He says: -—


I have spent my life in learning and teaching, and I can see how the educational system of this country plays a greater part than any other single factor in perpetuating the division of our nation into two peoples —the privileged and the unprivileged.—(Reynolds, April 18.)

Dr. Joad then gives his solution as to how this division can be ended. He proposes to abolish the present educational system of, on the one hand, elementary schools for children of the working class, and on the other hand, kindergartens, preparatory schools, public schools and Oxford or Cambridge for children of the wealthy. In its place he wants to substitute a system in which every child is given an equal opportunity of developing his talents as a man and serving the community as a citizen, irrespective of the economic position of his father.” (Reynolds, April 18.)


Now it is true that the education, given out to-day plays a part, among other things, in perpetuating the class division in society. Whether or not it is greater than any other single factor is a point that need not concern us here. The influence of education on the preservation of things as they are is not due, however, to the two different standards of education, as Dr. .load thinks, but to the fact that education is coloured by a capitalistic outlook and inculcates into the mind of the child an unquestioning acceptance of the present order of society. Capitalist education is the antidote to revolutionary ideas.

The important point, however, the crux of the whole matter, is this: that education merely helps to perpetuate the class division—it is not the cause. It follows logically that even if you remove one of the perpetuating factors whilst leaving the basic cause untouched, then the effect of that cause will remain.

If Dr. Joad knew as much about the Socialist case as he would have us believe then he would know that the cause of the class division, not only in this country, to which Joad refers, but throughout the world, is an economic one: class ownership of the means of life. The class that owns and controls the means of wealth production, the land, factories, workshops, machines, etc., is obviously in a privileged position. Because of their ownership of the means of producing the things by which all men live they can deny access to these things by those that own nothing but their labour- power—-by far the largest portion of society. The propertyless class, then, are enabled to live only by the consent, and subject to the conditions of those who own the world’s resources.

The proposals that Dr. .load puts forward do not assail the privileged position of the capitalist class. The continuance of the ownership of the means of living is unchallenged. In fact, this is implicit in Dr. .load’s statement when he talks about every child being given an equal opportunity “ . . . irrespective of the economic position of his father." What does this statement imply if not that economic inequality will still prevail? If there are rich and poor then there are privileged and unprivileged. Riches are synonymous with privilege; poverty with slavery.

Unlike this self-styled ”middle-class intellectual,” we Socialists, members of the ”unprivileged” class, put before our fellow-workers a case that really strikes at the roots of the problem. Our solution is not educational reform, nor any other kind of reform, but abolition of private property—capitalism. When the means of producing wealth are owned in common by the whole of society no class will be able to exploit a subject class. There will be no classes—in other words there will be no privileged and no unprivileged. And as regards education, only then will, there be available to every child the very best that modern science and technology can offer. The whole vast field of man’s knowledge will be open to all the children of society. That is the Socialist case and one that Dr. .load could well learn.