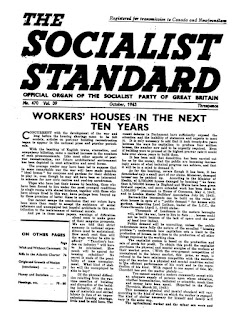 From the October 1943 issue of the Socialist Standard

Many people are incredulous when Socialists declare that money and banking will have no part to play in Socialist society.

Those on the "left" who are informed at all keep a discreet silence on this particular subject, or have been won over to the belief that Socialism has been established in Russia. Events and more information of the internal set-up of that country will in due course dispel the illusion from workers' minds. Yet such is the inroad that apologists of Russian “Communism" have made into the general theory that is essential to the workers' understanding of Socialism, that we are prompted to quote the Soviet War News pamphlet, "Believers and Clergy of the U.S.S.R." (Hutchinson & Co., 3d.). It contains a list of monies deposited with the State bank by priests and the acknowledgment of same by Stalin. One priest gives as follows: “I paid into the Government Bank on the 28th all my private savings, totalling 273,000 roubles'' (p. 6), (equivalent to about £11,000).

How these ecclesiastics came by their money need not detain us; what is exposed are the features of capitalism that Socialists have for years contended arise from the capitalist basis of Russian economy. What are the features of which we speak? Here a brief glance back is necessary in order to view capitalism in perspective.

Historically, capitalism, or the production of commodities for a market, breaks the fetters of feudal economy, based on domestic handicrafts and land cultivation, by revolutionising the means of production, thus changing the class relationship of landed proprietors and serfs to one of wage-workers and capitalists.

The erstwhile peasants become the employees in the capitalist's manufacturing workshops for wages.

Thereafter the development of the capitalist class itself goes apace with capital accumulation, and the invention of power-driven machinery to cheapen their commodities. Small private enterprise gives way to limited liability companies and trusts, tending always to remove the capitalists further from the activity of personal supervision by the delegation of a host of technicians, managers, etc., who carry out the capitalists' mandate, until in the case of State capitalism itself the State is used as the central organisation for managing capitalism as a national whole.

Whatever form it develops, the capitalist system produces commodities, and for their exchange and circulation needs a medium for expressing their value and price. All other commodities have been ousted by gold for this supreme position by the fact that gold enshrines in a small compass much human labour for its production.

Most national currencies are therefore related to gold— an ounce of gold of certain fineness, for instance, divides up into nearly four pounds sterling, or in currency terms £3 17s. 10½d. The fact that gold, having doffed the commodity form and given the State stamp of money, can be replaced by metal or paper tokens, gives the clue to the basis of the capitalist arrangement of credit money, or exchange without immediate payment in gold, which enables the finance capitalist to offer to the whole capitalist class the total loanable wealth via the medium of banks, much to the dismay of the “small man," who finds difficulty in getting credit as against large concerns.

Any mismanagement of token currency by the capitalistic state in, say, the printing of too many notes to do the work of gold coin leads to inflation, and a comparable rise in prices.

Money is rightly said to be the lubricating oil that enables the capitalist mechanism to move, but it is not the motive power, for the true drive is the human need of the necessities of life. Standing in need of these necessities, the workers must sell their labour-power before they can buy commodities for their subsistence; and by the social legerdemain of money they are legally robbed of full access to the social wealth which they have produced, the trick being that wages will purchase but a portion of the total wealth made by them, the surplus being split up among the employing class.

With the foregoing as a background we return to the subject of Russia.

The social upheaval that took place in Russia opened up the country for industrialisation. The Bolsheviks seized power by the support given them by war-weary workers, soldiers and peasants, for the slogans of peace, land and bread; taking control of a state where the partly foreign capitalists were very weak politically. But could they jump the successive stages of capitalist development into Socialism? The S.P.G.B. declared an emphatic no! No intellectual minority could perform the social miracle of introducing Socialism with a non-socialist majority! Around the "Communist" dictatorship gathered those who determined to end the slough of semi-feudal Czardom. Learning from the large- scale producing countries, and applying this technique to a huge backward country, they tackled the problem that once faced all capitalist countries, namely, how to get cheap food for the towns. This was done by buying at a fixed price all peasant produce and by urging peasants into “Collectives" for the more economical use of machinery leased to them by the State. Alongside with this, industry was planned on the' basis of payment by results, or piecework, thereby increasing that part of the population dependent on wages paid by the State.

Thus at a stroke, this form of state capitalism removed any would-be capitalist to the completely impersonal owner of capital vested in the state, and created a social stratum of managers, experts, and functionaries who are appointed and salaried by the government. The class relationship in Russia is not yet sharply defined, but at first glance it could be described as one of state investors as against mere wage workers.

The official account of the state debt to hand is in the Statesman’s Year Book, 1942, which gives the following: "In January, 1933, the internal debt was 10,088,900,000 roubles; the internal debt has been increasing annually; some are lottery loans, and others bear interest of 4 per cent."

“National debts, i.e., the alienation of the state," says Marx, “whether despotic, constitutional or republican, marked with its stamp the capitalist era. The only part of the so-called national wealth that enters into the collective possession of modern peoples is their national debts." He then continues, “As with the stroke of an enchanter's wand, it endows barren money with the power of breeding and then turns it into capital without the necessity of its exposing itself to the trouble and risks inseparable from its employment in industry or even in usury."—Capital Glaisher Edition, p. 779, Genesis of Industrial Capital.)

Those simple souls who look for a capitalist class in Russia living in luxury will look in vain; for accumulation has had a chequered career in that country, being sunk in the fixed capital of new industrialisation, in the shape of roads, factories, power undertakings and equipment, much of which was bought and paid for from abroad, and this, together with the necessary heavy taxation drained away by the needs of modern war, leaves little time for the production of luxury goods. It would seem that the creditors of the young Russian state must wait for better times. Austerity is the mode at present for the monied class in Russia, although glimpses can be had of the upkeep of villas and servants which suggests a much higher living standard than that of wage-workers.

In contradistinction to state capitalism and those who advocate the nationalisation of the financial system, Socialists stand for the complete ending of the assessment of values in terms of money. Socialist society will not produce exchange-values or spend any part of its labour force obtaining the metal gold for currency, so essential to capitalist production and payment.

It will, undivided by classes, produce and distribute goods and services without money or price for use by the whole community.