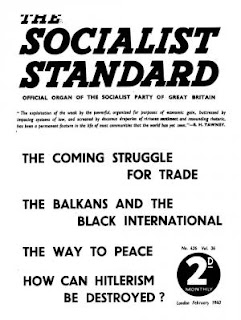 From the February 1940 issue of the Socialist Standard

The Socialist Party of Great Britain’s task of Socialist education necessitates destructive criticism of ideas prejudicial to the ready acceptance by the workers of the Socialist case; and in this regard a few words might be profitably said upon snobbery, which is very prevalent among the black-coated sections of the working class.

It can easily be understood that those workers who are snobbish and who value differences in economic status are not eager to undertake an unbiassed examination of the Socialist case, because they find the principle of equality, implicit in Socialism, repugnant to the differences they cherish in class and rank.

In relation to unemployment, the snobbish outlook of to-day bears an interesting parallel to the outlook of the Puritan moralist of the Reformation period. Just as the Puritan harshly condemned unfortunate vagrants as idle, worthless fellows, and deprecated the relief afforded to them by alms-givers, so to-day the snobbish black-coated worker despises the unemployed. Already penalised by being unable to find buyers for their labour-power, the unemployed suffer an additional penalty by being stigmatised at the hands of their snobbish fellow-workers.

In his belief in snob values, the black-coated worker fails to recognise that workers are displaced from industry by machinery and other economic forces, and he is loath to discard the fatuous notion that unemployment is attributable to laziness and personal deficiencies.

Similarly, the snobbish “intellectual” worker, warped in his judgments by excessive self-esteem, entirely disregards the important economic functions performed by manual workers, and looks down upon them as his “inferiors.” The distinctions he draws between “brain” and manual workers are purely arbitrary, as no clearly-defined line of demarcation exists between the expenditure of mental energy and that of physical energy. He overlooks the fact that the relative differences in the extent to which skilled and unskilled workers expend their mental and physical capacities are differences of degree and not of kind.

To regard productive occupations, without which society would perish, as occupations to be ashamed of is the height of absurdity. Opprobrium which the “refeened” attach to working in a factory or in a mine arises from a ridiculous scale of values. When analysed, such values are revealed to be based upon a fawning adulation of conceptions held by the ruling class. Bearing upon this point, let us consider for a moment the capitalist’s opinion of the workers.

The wealthy capitalist, in his arrogance and in his ignorance of social science, regards the bricklayer, the carpenter, the plumber, and, in fact, all workers, as unquestionably his natural inferiors; and snobbish black-coated workers, in ape-like imitation of their capitalist masters, assume accents, cultivate manners, and adopt fashions in dress, all for the purpose of marking themselves off from the “workers,” the assumption being that they (the snobs) do not belong to the working class.

The way a person obtains his or her living determines to what class he or she belongs; and all those who, by virtue of having no part in the ownership of the means of production, are compelled to sell their labour-power to obtain the means of sustenance are members of the working class.

By the same standards of judgment to which we have referred, personal worth is measured in monetary terms. Personal merits—physical, mental, or moral—even if they are not discounted, when viewed in the light of snob values, are of secondary importance. What is of primary importance is a person’s bank balance and social position: his qualifications are merely incidental; and this kind of evaluation is in complete accord with a social system in which inequalities are viewed as the eternal order of things.

Mean subservience to wealth and social position is characteristic of that kind of mentality we have been discussing. Those possessing this type of mind classify society according to income into a multitude of classes. They think that a worker earning £6 per week is twice as good as another earning £3, and the one receiving £3 is, in turn, thought to be better than one in receipt of 30s.

It is, however, gratifying to Socialists to notice signs of interest being displayed by black-coated workers in social problems, and that gradually their snobbish notions are being discarded. The black-coated worker is induced by the economic distress he sees around him and by the insecurity, from which he himself is not immune, to direct his attention to the necessity of creating a new social order.

The advancement of professional and clerical workers towards the adoption of Socialism as the remedy for social evils is proportionate to the retreat of snobbishness and ideas that obstruct such advancement. Economic conditions will result in the dissolution of the conceptions of class distinction and conceptions of “betters” and “inferiors.” Unemployment, insecurity, bad housing, and undernourishment, must inevitably disillusion, not only black-coated workers, but all sections of the working class. Having cast off their illusions, the majority of workers will begin to think on rational lines about their economic status. Then, and only then, will it become glaringly apparent to the working class that Socialism is the only solution to the evils that afflict it. The deep-rooted inferiority complex possessed by many workers regarding their social status will also disappear with the growth of their political understanding.

To impregnate the minds of the workers with Socialist ideas is to engender in them a detestation of boot-licking and cap-touching. The Socialist exhorts them to admire pride and independence, as qualities so necessary in the struggle for emancipation. Grovelling and lickspittling are vices to be abhorred by a class struggling to free itself from the fetters of wage-slavery. And it is because capitalists demand a degree of subservience from black-coated workers, who tend to be sensitive to the indignities and superciliousness they endure at the hands of their masters, that they will revolt against capitalism and seek an alternative.
V. J. Berry
Posted by Imposs1904 at 7:16 AM

This article was originally signed V.J.B. Vic Berry's obituary was in the March 1990 issue of the Socialist Standard.