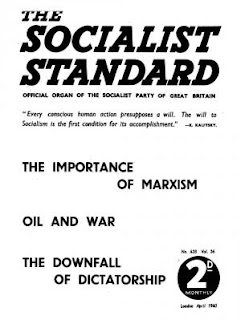 Editorial from the April 1940 issue of the Socialist Standard

"Great Britain has entered upon war in defence of a great principle. She seeks no advantages for herself, except the inestimable advantage of peace. She desires no increase of territory—no augmentation of power. She has no ambitious objects of any kind to serve. She stretches forth her hand for the maintenance of law and order, and in defence of the morality of nations. In the great federation of the European States, one that is puffed up with pride, vain-gloriousness, and lust of dominion, cannot be allowed to destroy the liberty and independence even of the meanest, without peril to them all. The rulers of this nation, impressed with a full sense of their responsibilities, exhausted negotiation before they resorted to war. . . .  As long as there was the remotest chance that the dictates of reason and justice would prevail over the headlong passions of the disturber of the world, they refrained from any appeal to the sword."

It may be asked what bearing the Crimean War can have on the problems of the present day. Why worry about events that happened eighty-six years ago? The question is partly answered by pointing out that the words quoted above appeared in the Illustrated London News of April 29th, 1854, when Britain and France were at war with Russia in defence of Turkey, because they were unwilling to see Russia dominant in the Balkans. There is in this a lesson for the very large number of people who, accepting war with reluctance, are yet hopeful that this time there really will be a settlement of European rivalries which will make further wars impossible. Curiously enough, among them are the present editors of the Illustrated London News, for in their issue of February 17th, 1940, is an article
urging the need to avoid the mistakes of the Versailles Peace Treaty of 1919: —

If you want a good, lasting peace, prepare for it while the war is still in progress; otherwise the cessation of hostilities may find you with no definite plan, or—worse still—a plan that will inevitably lead to another conflict.

If those who think on these lines would pause to read the Illustrated London News of 1854 they might come to see that there is not the slightest chance of gaining lasting peace by any means short of establishing Socialism.

The parallels with the speeches and writings of the present war are remarkable. In the issue of April 29th, 1854, the Czar, like Hitler to-day, is denounced for “proved falsehood," “ hypocritical pretence of religion" and for breaking his pledged word that he had no further territorial demands: “In defiance of his solemn promise that his aggression should be confined to the occupation of Moldavia and Wallachia; in defiance of the word and faith of a 'gentleman'—which there is no word in the Russian language to express—he attacked in the most treacherous manner, and with an overwhelming force, a portion of the Turkish fleet that lay quietly, and suspecting no evil, in the harbour of Sinope."

In October, 1854, the war was gathering momentum, and its aims were being discussed:—

It is no longer a matter of Turkish independence that is in dispute. . . . It is the equilibrium of a continent that has to be restored. — (Illustrated London News, October 28th, 1854.)

In the same issue there was the same lamentation that marks the current Labour and Liberal Press, about missed opportunities of calling a halt to aggression when it first began: “The proper time for resistance to the aggression of Russia was when the Czarina Catherine II and Frederick the Great of Prussia concocted and carried out their scheme" (i.e., the partition of Poland).

This brought the Illustrated London News to their plea that Poland must be reconstituted as an independent nation in order to serve as a barrier to the Russian advance into the Balkans: —

. . .  she would be prevented from playing the desperate game by the existence of Poland, protected as it would be by the public law of Europe, and by the armies of every State which now or hereafter may become a party to the Anti-Russian alliance.—(Illustrated London News, October 28th, 1854.)

There was one difference. Russia, not Prussia, was then the chief offender, but Prussia and Austria were Russia's “accomplices and 'comrogues.' "

Were Russia forced to release her grip of that ill-gotten possession, Austria and Prussia might be well content to relinquish theirs. To Prussia the Allies owe nothing. The Prussian King is the agent and friend of the Czar and will, sooner or later, share the Czar’s fate, whatever it may happen to be. . . . . The day may come when the long-suffering people of that country . . . will take to themselves another Sovereign.

With these and other arguments with which we are fed to-day the Illustrated London News of 1854 carved up the map of Europe in the self-appointed task of planning peace and a better world. So also their successors of to-day. In the issue of February 17th, 1940, one contributor quotes with approval the statement by Mr. Arthur Bryant: “However signally we defeat our enemy in the field, we shall never achieve our end of freeing Europe from the periodic effects of his violence and aggression until we have learnt to understand their causes."

Mr. Bryant believes that he has found those causes in German history—“ one that dates back far beyond 1914," but which includes as an important phase the treatment of Germany after the last war.

On another page of the Illustrated London News (February 17th, 1940) Mr. Bryant shows how little he has really learned of the causes of war; for after a lengthy and wholly inaccurate exposition of Socialism he finds that “the problem of the age, if we could but see it, is to remove the grave faults in the present operation of the capitalist system without subjecting our people to despotic forms of life and work . . ."

In short he wants to keep the economic system whose inevitable result will be more Crimeas, more Franco-Prussian wars, more Great Wars to end war, and more writers hopefully planning new capitalist worlds amidst the war-shattered ruins of the old one.