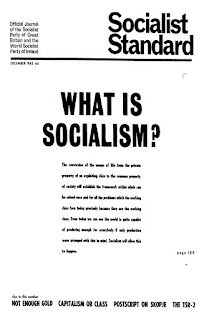 When George Orwell wrote Nineteen Eighty-four, he was concerned in particular with what he called “double-think.” This was the term used to illustrate the crazy practice of reconciling one's self to an evil by equating it with its opposite, summed up in such terms as “War is Peace." What impressed Socialists when reading Orwell's book was that some at least of the facets mentioned in it were with us already, particularly “doublethink." Private property society has always had its double-think to help justify its existence to the underdogs, but double-think has become sharpened and enhanced under capitalism to a degree.

Take "War is Peace” for example. Countless times have we been told that we must arm to the teeth to preserve peace, never mind the abundant evidence to show the futility of such action that it does anything but preserve what uneasy peace we may enjoy. Labour, Liberal and Tory parties have all preached the same tragic drivel, and the working class have largely agreed with them.

And should war come, there will no doubt be plenty of them now to urge us to “fight for peace” (another bit of double-think), or rather for the recovery of the peace which their policies have so blatantly failed to preserve. But by then they will have quietly forgotten their previous words. In the meantime, they will continue to vote for “defence” expenditure (more double-think; no power ever has "offence” expenditure), and assure us how much in our interests it all is.

Propaganda goes on the whole time to keep us conditioned to the idea. Sometime, it is more of an undertone, but it is there nevertheless. An example of this was the row which blew up recently over the Australian government's decision to order the American TFX bomber to equip its air-force instead of the British TSR-2. In a subsequent attack on the Tory Government, Labour M.P. Denis Healey said:


It is said that the whole (TSR-2) programme will cost us about £1,000 millions, which works out at £20 millions for every aircraft ordered . . .  does this make sense in military terms, particularly when the army is still crying out . . .  for helicopters and other transport aircraft which could be bought for only a tiny fraction of the sum? ” (Guardian, 5/11 /63.)

You get our meaning? Mr. Healey did not spend precious minutes arguing a case for armaments as such. The whole assumption behind his statement was that, of course, you agreed they were desirable. It was just a question of which armaments, when, and how much they would cost. Note in addition how you are asked to believe that it is your money which is at stake and that therefore you have an interest in seeing how it is spent.

But in truth, such is not for you. An interest like that is for the capitalist class and their spokesmen, like Mr. Healey, because the colossal sums spent on war weapons as well as other state expenditure cannot by any stretch of the imagination come from workers’ pockets. Workers get their wage packets and the rest belongs to the capitalist class, but strenuous efforts are made to delude workers otherwise. For without their support, armaments are impossible. Indeed, without it, so is capitalism. There’s the lesson to learn.


Hypocrisy
There was once and still is a man called Dr. Nkrumah who was imprisoned by the British but later became prime minister of the new West African state of Ghana. Later still he became Ghana's first president when it was declared a republic.

Not long after his rise to premiership, ugly rumours began to circulate about his dictatorial ambitions. Some of his more outspoken opponents just “disappeared” and threats and intimidation were levelled against others. During his lifetime as premier, the Ghanaian parliament passed in 1958 the infamous Preventive Detention Act which enabled his government to imprison for up to five years without trial, anyone considered a danger to the state.

Now we read that this act has been amended to add yet another five years to the period of imprisonment where the for release under the old act. “A distasteful necessity,” claimed the minister of defence in his support of the new move. Now where have we heard such words before? Ah, yes. In South Africa recently when similar powers were given to the Verwoed government.

And talking of South Africa, this brings us to the whole point. There was another of those demonstrations in Trafalgar Square on November 3rd, this time in protest against apartheid. Among the many messages of sympathy and support was one from none other than—Dr. Nkrumah. Somebody once said that those who live in glass houses should never throw stones, but clearly this does not apply to capitalist politicians. Cant, humbug and hypocrisy are political meat and bread to them. Nkrumah is certainly no exception.


The Duke again
The Duke of Edinburgh certainly gets around and simply loves making speeches. On October 30 he spoke at the Coal Industry Society’s luncheon, on the next day at a flight safety conference, and on November 5 at a nature conservation study group. A record enough to turn any politician green with envy, you might think, though it was the first of these speeches which interested us most.

“How much longer could we go on exploiting every feature of this country for gain?” he demanded to know, and continued : “Is it possible to reconcile the national need to increase prosperity with the national need to use this prosperity for the benefit of the human population?'’ He said he did not pretend to know the answer, but a few thoughts do occur to us.

First of all “we"; if by that he means the majority of us [we] do not, in fact cannot, exploit any aspect of this or any other country for gain. We are the working class, and all that we “gain” from our labours is a wage packet. That doesn’t make us very prosperous. Conversely, of course, there is the other ten per cent., and this includes the Duke, who do the exploiting and reap the benefits of ease and comfort. This other “we,” if they were honest, would answer the Duke's leading question with the words: "For just as long as we can." Or, to put it another way. “For as long as the workers are mugs enough to let us.”

Blessed are the Poor . . .
Who said that? Well whoever said it, there's one body which doesn’t believe it, and that is the Church of England. The total revenue to the Church Commissioners for the financial year ending March 31 was over £17 millions, of which more than £9 millions was from stock exchange investments and about £5½ millions from real estate rentals. In fact, stock exchange and property deals have more than doubled the Commissioners' income in the past fifteen years. Their capital assets are valued at more than £300 millions.

Rich, very rich, you would say? So would we, but not the Commissioners. Another report followed a few days after their financial one, telling us that they were not really wealthy after all. Apparently the Commissioners contribute only about half of the money needed to keep the Church working. Be that as it may, it does not really concern us. A fool and his money may soon be parted, but what interests us is where his huge sums of money come from in the first place. There is only one answer— from the exploitation of the working class.
Eddie Critchfield
Posted by Imposs1904 at 10:17 AM