Democracy and Understanding: Should We Leave Politics To The “Intelligent Minority”? (1940) 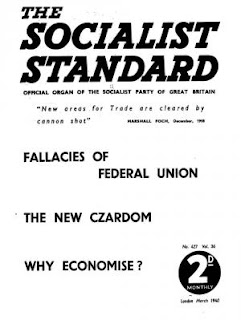 Editorial from the March 1940 issue of the Socialist Standard

Mr. Bernard Shaw, in a criticism of Mr. H. G. Wells, has re-stated his argument against democracy. Mr. Wells had said that “everybody has an inherent right to legislate."

Mr. Shaw answered this in the Daily Herald (February 19th, 1940). Having pointed out that it would be absurd “to tell a man that he is ‘free' because he can be a Shakespeare or a Noel Coward if he knows how, when he doesn't know how, and cannot learn to,” Mr. Shaw continued as follows:—

. . . . but it is not more absurd than to give him a vote and tell him he is free to choose the rulers and legislators of his country by the exercise of his political wisdom founded on an extensive knowledge of history.
If he has no political wisdom and knowledge of history (very few people have much) he will take refuge in simple idolatry of Wat Tyler, Jack Cade, Good Queen Bess, Titus Oates, Lord George Gordon, Napoleon, the Tichborne Claimant, Gladstone or Disraeli, Horatio Bottomley. and—not to name living persons—any dictator who knows how to humbug him.
Now to give idolatrous gulls power to choose our rulers only creates an urgent necessity for their liquidation. We are, in fact, spending six millions a day on an attempt to liquidate the idolators of Adolf Hitler. Caesar can always depend on his plebiscite. Napoleon knew this. So do Adolf and Benito.

There is a good deal of truth in these observations, but does it constitute a case against democratic methods? It is true that fewer mistakes would be made in politics if the voters all had more knowledge and understanding of history (and some other even more important things), but would the mistakes be fewer and less dangerous if politics were left to the selected few? Mr. Shaw would reply that it depends on which few. He would be the last to maintain that the interests of the majority of the population, the workers, were looked after by the infamous few who used to run politics before the introduction of the universal franchise. Indeed, one of the men he mentions, Disraeli, had quite a considerable knowledge of history, but Mr. Shaw pillories him along with the others.

Mr. Shaw gives us a hint when he highly praises Mr. Wells, and adds that he classes himself among "the thousand best qualified people in Europe to take counsel with Mr. Wells.” The other 999 we do not know, so let us examine the claims of Mr. Wells and Mr. Shaw. Are they wise and dependable above the common herd? Are they always far-seeing? Have they understood the way the world is going and the necessity for Socialism? Are they humane and practical? Are they—as the principle requires—infallible? By no means. To put last things first, they have often been unable to agree with each other and have disagreed with more heat than reason. They have often been childishly short-sighted. They have both been able to support wars with the flimsiest of reasons. Mr. Shaw has been able to explain and excuse the Russian invasion of Finland and Mr. Wells—in the intervals between advocating a new world order under the auspices of the National Peace Council— has been advocating the bombing of Berlin. Mr. Wells has often, in his discussions of important questions, shown himself completely carried away by petty personal considerations. Mr. Shaw has sometimes betrayed a most woeful ignorance in his criticisms of Marx and Socialism. What, then, would happen if the world were given over to a thousand Shaws and Wells ?

Mr. Shaw has given us another weapon with which to attack him. He now ridicules the ignorant masses who fell for Hitler and Mussolini, but has he forgotten that he has named himself among their great admirers? Who was it who said only 18 months ago that he thought them ”two highly capable revolutionary and proletarian leaders”? In saying that Mr. Shaw placed himself among the self-deluding masses who, he says, are not capable of engaging in politics.

In actual fact the working class, with all their costly errors, have not shown themselves worse than the intellectual thousand. In many respects they have shown themselves superior. It is Hitler’s highly-educated university professors and others who swallowed whole the Nazi nonsense about superior and inferior races, and it is their British counterparts who gave support to a class doctrine equally nonsensical. When Dr. Ley, one of Hitler’s key-men, says that "an inferior race needs less space, less food. and less culture than a superior race," few people in this country would defend it as a proposition (though some are willing to apply in the Empire), but how many of the intellectual thousand will be prepared to repudiate the corresponding class doctrine? Mr. Shaw may pass the test, but will even Mr. Wells? And even if he does how many other comfortably placed intellectuals will reject and oppose the capitalist practice which divides the population into a "superior ” class which gets more space, better housing, more food and better quality food, and more culture than the “inferior" class?

The hard and unpleasant truth is that in the main the men Mr. Shaw so admires are invariably to be found selling their brains to the Hitlers and Mussolinis and helping the latter to keep the workers where the capitalist wants them, in a state of confused and pathetic resignation.

Mr. Shaw has not found a better way than democracy.

May we add that Shaw was one of the founders of the Fabian Society, which aimed at reforming “capitalism" and spreading education among the people. Mr. Shaw has frequently held up for admiration the personality and work of various members of the Fabian Society—MacDonald, the Webbs, etc.—and yet the net result of the educational activities of the society is that the mass of people "take refuge in simple idolatry"! If this is not an illustration of the bankruptcy of Mr. Shaw’s intelligentsia, we would like to know what is!