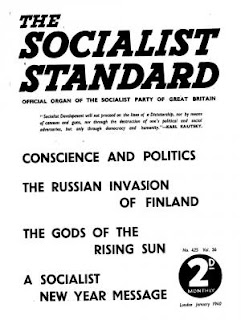 From the January 1940 issue of the Socialist Standard

The muddled arguments that arose in the war of 1914-18 with regard to the basis of conscientious objections to military service are again being dragged in by the Tribunals of to-day.
There can be no doubt that in the minds of some of those who sit on the present Tribunals only those who base their objections on purely religious, moral or ethical grounds can be considered within the meaning of the Act. In other words, those who declare their conscientious objection to military service to be largely influenced by political considerations cannot be accepted as having a bona-fide conscience such as would justify refusal of military service. I say some, not all, members of the Tribunals take this view.

The Chairman of the Manchester Tribunal has flatly declared that "there is no such thing as a political objection admissible under the Act.” This would seem to be the more popular view. But in the case of the London Tribunal, exemption was granted to a member of the I.L.P., whose appeal was mainly political in character, the applicant in question making no attempt to disguise his political convictions, nor the viewpoint of the Party to which he belonged. But the Ministry of Labour —or, to be technically accurate—its representative, lodged an appeal against the decision. The ground of the Ministry’s appeal was that such political objections cannot be accepted as valid within the confines of the "National Service (Armed Forces) Act, 1939,” and should, therefore, be definitely ruled out. This case aroused considerable interest in view of the many thousands of men who must be affected by the decision.

The hearing of the case took place at the Appellate Tribunal on December 6th. On behalf of the Ministry of Labour it was urged that, whilst the Act might cover religious, moral or ethical objections, it did not provide for political ones. The political objection in this case, said the Ministry, could only be construed as objection to a particular Government, to a particular war, and not against war as such.

Fenner Brockway, as the advocate and witness on behalf of the applicant, put up an excellent defence. After hammering home the experiences of the poverty and unemployment of the applicant and his family, facts which had indelibly stamped themselves on the latter’s mind, and thus influenced and moulded his opposition to the war, Brockway proceeded to deal with the political bias of the Ministry of Labour representatives. I say political bias, for that, in fact, it really is, although the argument was said to be a purely legal one ; “What does the Act say?” kind of thing. Well, the Act lays it down that: —

“(1) If any person liable under this Act to be called up for service claims that he conscientiously objects—
(a) To being registered in the Military Service Register, or
(b) to performing military service, or
(c) to performing combatant duties,
he may, on furnishing the prescribed particulars about himself, apply in the prescribed manner to be registered as a conscientious objector in a special register to be kept by the Minister (hereinafter referred to as ‘ the register of conscientious objectors ').”

Thus it is clear that, in the terms of the Act itself, no limitation is set to conscientious objection to military service. When the Minister of Labour, Mr. Ernest Brown, was questioned in the House of Commons “whether it was the practice of tribunals to discriminate adversely between those who base their appeal on religious and on ethical and political grounds respectively,” he replied "that conscientious objection is not defined in the Act and local tribunals have to use their own judgment. There is the right of appeal to the Appellate Tribunal, whose leading decisions will be circulated in order to secure reasonable uniformity.” When pressed further to say ”whether the House, in giving the right to conscientious objectors, meant to do so on all the above grounds,” Mr. Ernest Brown replied, “That is still the idea.” Yet when the London Tribunal used its judgment and granted exemption, it was the Ministry of Labour who challenged that judgment.

All these points were stressed by Brockway in his statement to the court.

An amusing incident occurred when a member of the tribunal arrogantly interrupted Brockway’s speech with the remark, “ I don’t care what politicians have said.” When informed that Brockway was about to quote the Prime Minister, the same voice said, “ I don’t care what the Prime Minister said.” The manner of this tribunal member led many of us in the Court to agree that he has but little time for conscientious objectors of any school of thought. However, judgment in this case was deferred. It was evident that the tribunal found it a none too easy task to rule out political objections to military service. It also appeared as if they wanted to skate around the Act to discriminate between moral, ethical and religious forms of conscience. Whether they went to the innermost recesses of their own minds or to some politicians of whom it might be said, "I don’t care what politicians have said," one cannot tell. The outstanding fact is that the Act of Parliament in question could not be construed to exclude the political objector, except to those with definitely political prejudices.

We have since learned that the Appellate Tribunal has declined to give judgment on the case submitted by the Ministry of Labour. Nevertheless, the tribunal decided that the name of the applicant and that of another whose case was similar, should be struck off the register of conscientious objectors. So, where are we now? Presumably, the local tribunals who granted exemption to these men in the first instance will be careful about granting such exemptions in the future.

But why should this matter of conscience be so exclusively confined to other forms of thought than those of a political nature? What, in any case, can the word conscience be made to reasonably stand for? Twist and turn as one may through the mystical and philosophical paths associated with the question, and it will be seen that conscience in its practical application in human thought and action ultimately turns upon the factor of opinion or belief, reinforced by feeling. One may reasonably insist that a sense of duty, loyalty, sympathy are the essentials of conscience, but under examination these in turn will be found to be largely conditioned by opinion or belief, plus feeling.

Charles Darwin, in his excellent though seemingly forgotten work, "The Descent of Man,’’ treats the meaning of conscience to be identical with the "moral sense.’’ He says: "I fully subscribe to the judgment of all those who maintain that, of all the differences between man and the lower animals, the moral sense or conscience is by far the most important."

Aside from the question whether Darwin’s chief distinction between man and the lower animals is correct or otherwise, his insistence upon the point that conscience is on a par with morality finally compels him to regard the matter as one of conviction. Later in the same work he states: "Ultimately man does not accept the praise and blame of his fellows as his sole guide, though few escape this influence, but his habitual convictions, controlled by reason, afford him the safest rule. His conscience then becomes the supreme judge and monitor." (Italics ours.)

Now, one could continue to discourse for quite a long time on the various shades of meaning surrounding the phrase conscience and to trace its sources from conditions in past and present social life, but still must its importance rest with the concepts which mankind forms for a line of conduct individually and socially.

With this principle in mind it will be perceived that political concepts, opinions, ideas or ideals are as much the motivating forces of human makeup as religious, moral or ethical views can possibly be. Indeed, the purely political man is as great a myth as the "economic man" ever was. Whether particular political concepts are held to be progressive or reactionary is entirely beside the point for the moment; the outstanding fact is that political ideology cannot be dissociated from what has come to be mystically confused with "affairs of conscience."

There remains one other point to consider. The Ministry of Labour’s technical case, that objection to all war, and not to particular ones, can only be accounted within the terms of the Act, is a claim of no greater substance than the one of political objection. Logically, one would have to object to all war, under any circumstances whatever, to be allowed a conscience in the matter at all. I wonder what those people would say of those who would refuse to support and pay for a religion in which they had no belief. Would it be said that only those opposed to all religion could have a conscience in that case; that only atheists could have a conscience ?

Again, supposing the Government were to pass an Act compelling all people over 21 to vote. It is certain that many would refuse to vote, on the ground that they do not believe in politics. Others would refuse to vote because there was no candidate in the field who represented their point of view. Would exemption from the penalties imposed be allowed only to those who were opposed to politics altogether, such as the Anarchist? Or, is the entire question one of political expediency, to be decided by those who are in control of the State machine according to the interests of the ruling class. With this as the root of the whole subject, we shall leave the matter for the present.
Robert Reynolds

This article was published under Reynolds pen-name of 'Robertus'.

Reynolds - a long standing member of the SPGB - was to resign from the Party later the same year over the issue of the Party's attitude to the war. He's mentioned more than once in Barltrop's book on the SPGB, 'The Monument'.