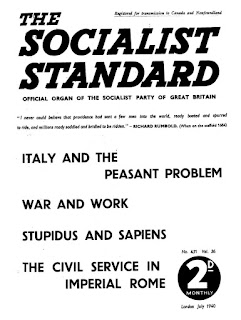 From the July 1940 issue of the Socialist Standard

(Reprinted from the Western Clarion, Official Organ of the Socialist Party of Canada, July-August; 1925.)

The vista opened out by the patient research of the archaeologist, the ethnologist, and the biologist in the attempt to unravel the unwritten history of man is one in which the most exuberant fancy can revel endlessly. Gradually there has been unfolded to us picture after picture until we see, far in the past, beyond even the earliest tradition, man first emerging from the forest gloom of primeval days. Low of brow, long of arm, short legged, huge muscled, grim of aspect, the direct forbear of the human race, yet lacking all vestige of aught we are accustomed to associate with humanity. Dwelling as the beasts of the forest, wandering through the day in search of food, grubbing for roots, climbing for fruits or nuts, crouching at night in a cave or on the limb of a tree; mating as the beast. A beast in all things, naked and unashamed. Where do we find in him any of that human nature we speak of so glibly? Where any conception of good, or evil, of decency, of morality, of faith, hope and charity? Where the soul that has been the source of so much anxiety to his posterity? Where the habits and customs, where the laws, human and “ divine”?
As says our Haji:

“What reck'd he, say, of Good or Ill,
Who in the hill hole made his lair;
The blood-fed rav’ning beast of prey,
Wilder than wildest wolf or bear?
“How long in man's pre-Adamite days
To feed and swill, to sleep and breed,
Where the Brute-biped's only life,
A perfect life sans code or creed.”

Yet, this is man, blood of our blood, bone of our bone. Our relationship to him is undeniable, and its closeness a mere matter of a few hundred thousand years. A long time? Not it! A mere turn of the glass compared to the ages between that ancestor of ours and his far-away forbear, the slimy, formless amoeba.

That man, urged onward by the same mute irresistible forces that have brought him to the threshold of manhood, passes over that threshold, and, generation by generation, approaches us of to-day, just as we are pressed onward to the morrow we know not. At the stern mandate of necessity he adapts himself to new conditions, devises new means of gaining his livelihood, creates tools and weapons, and ever improves upon them.


“Yet, as long ages rolled he learned
From beaver, ape and ant to build
Shelter for sire and dam and brood,
From blast, and blaze that hurt and killed.”

Age by age we can trace the march of our fathers towards us, ever, as they come, proving painfully and slowly by the accumulated experience of past generations; growing in knowledge, growing greater in brain and less brutish in body. Ever impelled by the stern necessity of obtaining a better hold upon the means of life. Improving their dwellings, their boats, their clothing, their tools and weapons. Discarding the rough stone weapon for the polished, that for the flint, thence to copper, to bronze, to iron.

Free, wandering, warring, hunting, lawless, propertyless, “ignorant” savages. Living thus for nigh three hundred thousand years before the first dawn of barbarism even. Then, finding a new source of food supply in the cultivation of the soil, swinging open the gates of Eden and passing out on the way that led to labour and to slavery, to progress and to civilisation.

That ancient forbear of ours, the child of the man-ape, the scientists call “homo-stupidus”— stupid man. Us they call “homo-sapiens”—wise man. Oh, fond conceit! Wise man! We who revere the antiquity of a civilisation barely ten thousand years old, and that with lapses. Who invest with a halo of heaven-born sanctity a mushroom system of property of little better than a century’s growth. Who bow before the altars of “eternal” deities discovered but yesterday. Who crystalise our miserable modern characteristics as “human nature”—as it was in the beginning and always shall be. Who elevate to the ludicrous dignity of divine law an upstart moral code coeval with shopkeeping. Who conceitedly plume ourselves upon the possession of a higher ethical sense than our rude forbears, and daily and habitually stoop to practises which the most untutored savage would abhor. Who lie, and cheat, and thieve, and prey upon one another. Who rob, ravish and oppress the weak and cringe before the strong; who pander to lust and prostitute for a pittance; who traffic, traffic, traffic in all things— in manly “honour,” in womanly "virtue,” in childish defencelessness, in the flesh and blood of kith and kin, in the holiest of holies or in the abomination of abominations; who crown our achievements by pouring over the festering heap of our iniquities the leprous, foetid slime of hypocrisy.

Wise man! Wonderful creature! Lord of creation! Hub of the universe! For whose uses all things, the quick and the dead, were especially created; the stars and the planets, the sun by day and the moon by night to light him; the earth, the seasons, the wind, the rain, the waters, the lightning, the metals, the mountains, the plains, the valleys, the forests, the fruits, the beasts, the birds, the fishes, the fleas and the flies—and corned beef and cabbage.

Though this is listed as a reprint from an issue of The Western Clarion from 1925, it is in fact a reprint of a reprint. It was originally from the Western Clarion, April 11, 1911. The author, D. G. McKenzie, was not listed as the author in the 1940 reprint but I included it here to give them their due.