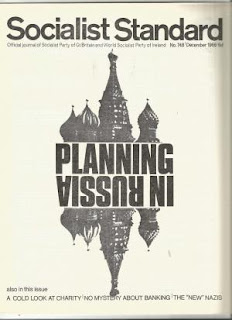 From the December 1966 issue of the Socialist Standard

The Labour Government must be pleased with itself. Unemployment is increasing.

Those members of the working class who cheered the return of a Labour Government which claimed it would put an end to “stop-go” must now be asking themselves whether the “shake-out” will develop into an economic fall out. An appraisal of how the situation has deteriorated since July 20 does not inspire much confidence in the ability of the Government or the capitalist class to deal with the situation.

Regular readers of this journal will know that we hold that an economic crisis, or the threat of it, is endemic to capitalism, the social system under which we currently endure. We further make the case that the economic ups and downs, loosely described as the good and bad days, do not come about because of the ability, or lack of it, of the capitalist class. Despite all the forward planning horrible gaffs are frequently made and the laws of the economic jungle as expressed in the markets of the world always prevail, often making a mockery of the planned growth so fondly extolled by these lance corporals of industry.

If General Motors is the thermometer of American capitalism, then the British model is ICI, one of the few British companies big enough in terms of capital, labour employed, turnover, and profit, to be included in a world ranking list. For years the prestige of this company appeared as if it could climb to the moon. Its board of directors was held in such esteem that some people would instal them as the Government in preference to the inept politicians of the Labour and Conservative Parties. Any words uttered by chairman Sir Paul Chambers—a former accountant and civil servant, and the innovator of the PAYE system of taxation— were always eagerly waited upon. So much talent was encompassed in the board of directors that they could afford to loan Lord Beeching to British Railways for five years in an endeavour to make that organisation a more profitable concern. The good doctor, as he then was, undertook the task, as you may recall, on the time honoured trade union principle of the rate for the job. The rate in question being the one he was receiving at ICI of £25,000 per year.

It was therefore highly ironical that IC1 should be the first of the large companies to announce cut backs as the squeeze took its effect. Profits for the first half of 1966 fell by ten per cent to £90 million and the forecast for the second half of the year did not look any brighter. Capital expenditure was to be cut back and 1,000 workers declared redundant. All because the high powered, and even higher paid, board of directors had overestimated the growth of the market in those commodities that they produce.

Since then reports have appeared in newspapers every day of firms either dismissing staff or putting them on short time. But as the number of workers involved in these instances are counted in tens and hundreds, rather than hundreds and thousands, the publicity attracted by these events has been small and completely overshadowed by the happenings at the British Motor Corporation, where tens of thousands of workers have been “shaken out”.

The situation has become confused, as some workers have engaged in retaliatory strike action. It is no longer clear which workers are on short time because the company is curtailing production, or, because parts are not available because of a strike in some other part of the organisation. The one thing that is clear, is that if BMC were asked the question recently posed in the pop parade “What’s it all about?” they would have to reply that they just didn’t know.

Unfortunately the Government and our fellow members of the working class would have to answer in the same way. If Prime Minister Wilson is correct and unemployment reaches 470,000 this winter, that will mean an increase of 150,000 in the ranks of the unemployed. How then, does this [plain] crazy Labour Government propose to do to deal with this? According to Minister of Labour Gunter there are a number of firms eagerly awaiting skilled labour as it becomes redundant, and the Ministry of Labour training centres are ready to retrain sacked workers and give skills to the unskilled. But some of the unions whose members are being affected by the dismissals have made a survey of the situations vacant and find the vacancies are falling, and those still available are not suited to the sacked men, and, in any event, there are not enough to absorb the workers now surplus to the requirements of the motor industry. As for the Government’s retraining scheme, there are 31 centres in the country and they can deal with 12,000 men per year.

The situation in the car industry today illustrates the difference between a capitalist society that produces for profit, and a socialist society that would produce for use. Who could argue that man’s requirements for motor cars has been satisfied? There are many families who own a car which often has been acquired at a great personal cost, including sending the wife out to work. A large number of cars have the owner underneath them carrying out repairs for longer periods than the car is actually in use. If roadside checks were made on private cars in the same way as on commercial vehicles a large number of them would be similarly ordered off the road. Some people who have been unaccosted by the affluent society cannot even afford an old banger.

So then, there are people without cars, and some with old cars, all who would like new cars. There are the workers at BMC who want to work a full week manufacturing cars. But the British Motor Corporation will not let them, because its function is not to make cars, but to sell them at a profit.

It may be said that the motor car is not really an essential thing. Have fear. If the crisis deepens you will find that the home makers, food makers and clothing makers will all curtail production if their products cannot be sold at a profit.
Ray Guy