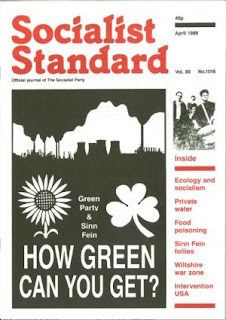 From the April 1989 issue of the Socialist Standard

Chinese troops patrol the streets of Lhasa to clamp down on yet another group of men and women clamouring for Independence. But what exactly has "self-government" meant to those around the world who have managed to achieve it?

Since 1947, thirty-six territories previously part of the British Empire have become independent sovereign states, although most of them decided not to forego the economic aid and trade advantages inherent in being a member of the Commonwealth. What have the people of these countries gained from the change?

Various types of one-party dictatorships exist, and bloody civil wars have raged in Biafra and Somalia. In the latter there is wholesale denial of the most elementary political rights and more than a million refugees have fled into equally poverty-stricken Ethiopia and Sudan. New independence movements indiscriminately slaughter those of different groups or tribes in India and Sri Lanka as well as Somalia. Corruption is rife even in so-called democracies. Abject poverty is the rule among the vast majority, while the new ruling class who control the economy grow rich. To celebrate Independence in 1984 the Sultan of Brunei built the worlds largest palace with 2.000 rooms and 257 lavatories. His subjects have been provided with a "Welfare State" and pay no income tax; even so. it is safe to say that independence has made little difference to their lives. The government of Sierra Leone is so concerned for the health and welfare of its "independent" people that it has accepted, against payment of course, the dumping of tons of British lethal toxic waste just outside its capital, Freetown. It is very doubtful whether the "mother country" would have dared to do this while Sierra Leone was a British responsibility.

Lesotho (Basutoland) and Swaziland are completely dependent upon South Africa, have repressive regimes and widespread poverty. No Independence here and certainly no benefits for any but the ruling clique. Even in those few states where material and political circumstances of workers have been maintained or improved, changes have been minimal. The fact that some of the most repressive régimes refer to themselves as socialist is, of course, a mockery.

When asked why we do not support struggles for Independence by fellow workers in other parts of the world, we point out that, at best, they will simply be exchanging one lot of masters for another. They may win or be allowed a little more freedom within the system but while it remains they must depend on the capitalists — state or private — for their subsistence. For workers, independence is merely a change of rulers.
Eva Goodman
Posted by Imposs1904 at 5:46 AM