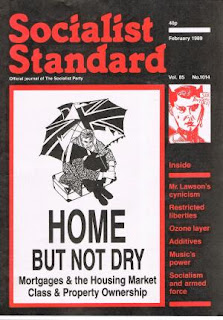 From the February 1989 issue of the Socialist Standard

As an addition to background music we play a subliminal message in a store, a message which you can't consciously hear, but which is going to be subconsciously received. We are in a sense an improvement in that we can focus more specifically on what we're trying to achieve with the pro-active system than you can with background music. We are trying to create a subtle effect, for instance using it for theft prevention. We've had systems in for two and a half years now and our results have ranged anywhere from 20 per cent reductions on theft to 90 per cent reductions on theft
(David Tyler. President of Pro-active Systems Inc., interviewed on Omnibus. BBC TV. 16 July 1984.)

The system described in this quotation — appropriately enough in the year 1984 — includes the words “I do not steal. I do not steal. I am honest . . . " repeated in a whisper which cannot be consciously heard as it follows the sound level in the supermarket. Policing the workforce has certainly come on a long way since the days of the Bow Street Runners. Rediffusion now exports the sedative effects of "Muzak" to 135.000 large subscribers in over 30 countries, from Africa to New Zealand and Japan. But the power of music has long been recognised by those in power. In Ancient China there was the Foundation Tone, a "sacred" pitch believed to guard against disorder. In Ancient Greece, music was legally regulated as a potential force for good or evil. In the nineteenth century, the emotive quality of music was shamelessly prostituted to enhance many nationalist movements, despite its intrinsically global appeal. In the 1920s. Catholic missionaries introduced brass bands into Papua to "subdue the dangerous energy" of native headhunters. And when the BBC lengthened the last pip of the radio time-signal after the Second World War, a number of angry listeners complained about unwarranted interference with the true and proper order of things.

Music and songs can, of course, be great forces for change, although recent cases where this has been claimed are in fact nothing but shams. Take the boom in musical charity projects which began a few years ago with Bandaid. Liveaid and the We Are The World record. The fine sentiments of global unity and compassion fizzled out in the old holy trinity of "faith, hope and charity"; the attempt to redistribute poverty failed utterly. Even Bob Geldof himself now freely admits that it solved nothing and changed nothing. Some still say "Well, we know it's not the answer, but . . . " in a defeatist tone which accepts that this society of insane contradictions will just have to do for the time being.

The subversive rebel music of the fifties and sixties — the tradition of sticking two fingers up at the establishment — found its seventies expression in punk rock. Once again, there is a long history of such musical defiance, with jazz in its day having enjoyed a similar reputation, even if it did not embody the punk idea of participation and access to the music for anyone. In 1928, W.H. Hadow wrote that "the jazz band . . .  puts itself outside the pale of music by the coarseness and vulgarity of its utterances" and four years later Arthur Bliss pronounced that jazz was "a subject for the pathologist rather than the musician". These fearful reactions continue today, particularly among the "moral majority" in the American South where an MCA executive refused to produce an album by the punk group Black Flag on the grounds that it was “anti-family”.

The ways in which such music has been accommodated into the mainstream have been well documented. Speaking of the punk album Never Mind The Bollocks Here's The Sex Pistols, the Virgin Records Press Officer, Al Clarke, said: "The LP was released eleven days ago. It brought in £250.000 before it was even released and went straight to Number 1 in the charts". Once Castro was in power in Cuba he used the tradition of subversive music, La Trova Cubana to consolidate the new régime, with an official festival in Havana in 1967 called a "Protest Song Get Together". Likewise, reggae has been used in Jamaica by the state as a means of controlling dissent; it is perhaps significant that Bob Marley's first record was called Simmer Down. And in Britain, the idea of using apparently rebellious music as a means of control came readily to ex-teachers like Sting when he was singing with his old group The Police. In an interview he spoke of controlling the crowd and leading them to oblivion, and concluded "There isn't much difference between rock'n'roll and teaching, mind you. It's the same job. You're entertaining delinquents for an hour”.

The limitations of protest music were well summed up by the folk singer, Dick Gaughan in Folk Roots, September 1986:

You can say what a bunch of villains the ruling class really are, what a nasty bunch of war-mongermg bastards they are. Bob Dylan made a fortune out of doing that in the '60s. Nothing wrong with that. But as soon as you go over the edge and take the step of saying the solution to the problem is ordinary working class people who are actually not just going to say the world is a terrible place, but are going to take the power off you and stuff it up your arse . . .  say that we are actually going to lake control . . . at that point you have gone too far. You can say anything you like except suggest a change of power into the hands of the working class. You can argue for socialism as long as you don't define what you mean by socialism.

This safety has been well noted and acted on by some of the commercially promoted and quite successful artists who form the eighties equivalent of protest music, the (mostly pro-Labour) ‘agitprop” bands and singers affiliated to campaigns like Red Wedge.

Whereas an earlier generation of protest singers like Dylan sang the poetry of dissent without campaigning for presidents or prime ministers, the present wave have been recruited into British party politics by the ogre of Thatcherism rather than the capitalist system itself. In some cases artistic popularity has been used to sell stale and second-hand ideas for an alternative brand of "people's capitalism”.

During 1985. Billy Bragg performed 50 concerts as part of the "Jobs For Youth" campaign in conjunction with the Labour Party, and that tour led directly to the founding of Red Wedge, a coalition of performers which declared itself "committed to a Labour victory at the next election'. Billy Bragg himself was quoted as saying of the earlier protest singers that “All that generation came to nought. They thought that if they joined hands and sang Imagine the world would change" (Sunday Times, 26 January 1986). But this eighties "realism" is not all it seems, and John Lennon's plea for people to “imagine — no possessions" will prove to have been more challenging than Bragg's badge of slavery in Between The Wars: “I'll give my consent, to any government that does not deny a man a Living Wage . . . " In the same article, Andy McSmith. Labour's Jobs and Industry campaign co-ordinator said “Billy is worth his weight in gold to us”, and Eric Heffer commented “it is a good thing that an ordinary working-class lad like Billy should identify himself with the Labour movement". The Red Wedge manifesto itself strengthened the myth that mass unemployment was invented in 1979 and could be cured by “Government and council spending", and on the subject of war only promises more of the same:

The Russians are making clear their commitment to world peace . . .  under Labour we would see a move to real defence . . .  This does not mean, as the Tories claim, that the country would be defenceless. It means strengthening and modernising our conventional defences, which are dangerously run down.

Which brings us full circle to the Ancient Chinese Foundation Tone, humming the monotonous tune of the present order, with its international rivalry and bombs, its poverty and despair. But there are far brighter things to sing about. The world and all its resources, including communication and entertainment, are still waiting to be taken into the hands of the world community, to be used by and for us all.
Clifford Slapper

To be continued next month with a look at how the music industry makes its profits.