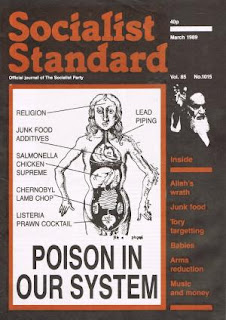 From the March 1989 issue of the Socialist Standard


In an article in last month's issue, we showed how music has continued to serve the interests of the powerful. This month we look at the economic side of the modern music industry.

Earlier this year, Thorn EMI splashed out nearly £200 million for the copyright of more than 250,000 songs; its portfolio already included many old favourites like Happy Birthday To You. Back in 1981, Woolworths took a full page advert in the Financial Times, aimed at increasing confidence among investors. They boasted with alarming honesty: We're not in the record business because were music lovers. We're in the record business to make money. So we only stock records we know we're going to sell a lot of.” This sums up perfectly how capitalism has done to music just what it has done to every other creative field. Individual creativity has to be sacrificed to profitability in the form of the lowest common denominator: maximum sales, from maximum uniformity and manipulation of the imagination, with a ruthless division between producers and consumers. It is hardly surprising, then, that there are obstacles in using music to express the need for revolutionary change.

At first, the idea of making profit out of music posed several problems. How could the product be packaged and marketed, without being enjoyed by those who could not or would not pay? The enterprising pioneers of exploitation were no more slow in getting round such an obstacle than they have been in the case of water, light or heat. The profitable sale of tickets for private performances of increasing frequency was soon followed by a great rise in the sheet music industry in the earlier part of this century. The accumulation of copyrights in the hands of entrepreneurs (who exploited changes in the copyright law) was soon to diminish the potential rewards for both performers and even composers. But of course, the great modern coup for those seeking to profit from the creativity of others was the rise of mass produced records and, later, tapes, compact discs and so on. Here was the epitome of capitalist artificiality: a moment of musical inspiration captured on vinyl to be played back a thousand times. And if it snaps, no problem. Pay for another, and the identical sound has again been purchased. From the start, manipulation of taste was understood to be essential for maximum profitability. As head of BBC music programmes. Stephen Plaistow stated that "public taste must, of course, be led” (quoted in The Changing Face Of Music. Hugo Cole). The workings of this system, which persists today, were explained by a Musicians' Union representative in Living With The Mass Media (Cave and O'Malley):


Any music publisher can tell you six months ahead which song is going to be popular. The public does not make a tune popular . . . There is in the industry a close link between the publisher, the record manufacturer, the BBC and the ITA . . .  They are all involved in the beautiful arrangement which results in the popularisation of a certain number of tunes each year. There is not only an organization to make certain tunes popular, but there is even a process of making them unpopular when it is necessary for more to be produced, out of which more money can be made.

Some time ago, the world's biggest Hi-Fi seller, the Sony Corporation, bought CBS records for two billion dollars. This now means that virtually the whole of the pop music industry is controlled by about four companies. The owners of companies like EMI or RCA amass growing fortunes out of the creative work of musicians, most of whom are not among the few dozen world-famous and very rich individuals. The people who actually make the records, who work in the factories where they are manufactured and the studios where they are recorded, the transport workers, sound engineers and so on are working in the same frustrating conditions as in any other industry. The faceless thousands of producers, together with the faceless thousands of consumers, are not being served by the system we are dealing with here.

Writing in 1938, Theodor Adorno compared the idea of the heroic star of the stage or screen with a fascist kind of hypnosis:


An approach in terms of value judgements has become a fiction for the person who finds himself hemmed in by standardized musical goods . . .  The listener is converted, along his line of least resistance, into the acquiescent purchaser . . .  The star principle has become totalitarian . . .  The official cultures pretense of individualism necessarily increases in proportion to the liquidation of the individual.

Today's technology has made possible all kinds of bizzare extensions of the commercial perversion of music. A couple of years ago, the idea of introducing a levy on blank audio tapes was supported by Norman Tebbit, who argued that "home taping of music amounts to theft”. Of course, if you are a musician earning a living from playing live and from sales of your recordings, then you will understandably be strongly opposed to home taping; hence the Musicians' Union's slogan of “Keep Music Live”. But this is just another example of the absurd contradictions which are constantly thrown up by the profit system. Such conflicts of interest, and such a notion of "theft", simply would not exist outside of a system of private property and sectional interests. As another example of so-called music being filtered through a cash register, there was the report in 1986 that "the pop group Sigue Sigue Sputnik have sold the gaps between tracks on their forthcoming LP to advertisers. But the group's record company, EMI, also wants to fill the potentially lucrative gap in the market, and a team of the company's lawyers is studying the question of who owns the hitherto unloved and neglected portions of a record.”

Those directly involved in the music business have been most open in revealing its commercial obsessions. In a Times report on the industry in 1985, an executive of a Polygram subsidiary stated that "the way to reach the older market is not to sign different artists but market the ones you've got differently", while Charlie Gillett of Oval records reflected that "the possibilities of a small label having a big hit are more remote now than ever. You have to make absurdly large investments just to launch a group". John Peel pointed out that “the industry's interest is in slowing down trends, because the record companies are now having to function as long-term investment companies". And, most revealingly, and in the same report, a CBS marketing analyst pontificated that "there is a need for music which appeals to upwardly-mobile aspirations. We have to acknowledge that we're selling symbols". After all of this, who could claim that we are dealing with individual creativity or spontaneous expression when we plug in the record player?