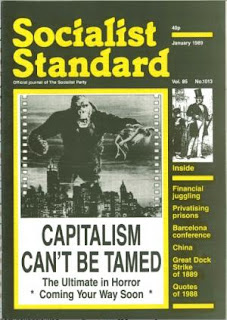 From the January 1989 issue of the Socialist Standard

The government starts selling off state-owned houses to their occupiers, as a means of raising income and giving people incentives to improve their homes. At the same time it fights inflation and puts limits on government spending. No, this is not Thatcherite Britain but capitalist China, where all too familiar economic problems exist. Nor is the comparison with Britain an unwelcome one, as People's Daily has sung Thatcher's praises and commended her personal willpower and reliance on individual responsibility. China's own version of perestroika (but without glasnost) makes the different varieties of capitalism ever less distinct.

It is ten years since the post-Mao economic reforms began. Individual enterprises had greater power delegated to their managers, and then the system of contracted responsibility meant greater emphasis on the market to determine prices rather than central decision. Now, in the so-called "third wave" of reform, certain enterprises are being merged — that is, loss-making concerns are being taken over by more profitable ones. In ever more explicit acknowledgement that the profit system operates in China, individual factories are now viewed as commodities to be bought and sold. The way in which people are treated in a profit-oriented economy is highlighted by an admission that men are often preferred as employees to women, since the latter produce less surplus value (owing to longer breaks and maternity leave).

Houses in the Chinese countryside are usually owned (and indeed, built) by the occupiers, but those in towns and cities are nearly all state-owned. Rents are extremely low (around 3 per cent of a tenant's monthly income) as part of the social wage but there is a housing shortage and the building industry naturally makes no profits. Overcrowding is appalling, sometimes a family of grandparents, parents and child will have to live in a single room. Nearly half of urban households have access only to a shared lavatory, and over a quarter do not even have their own tap water. It remains to be seen how many will want to buy such palaces. The other problem will be fixing a price for the sold-off homes, as the present market price would be way beyond what ordinary workers could afford. It may even be decided to raise rents in order to encourage buying.

The Chinese health service is in no better shape, with the contradictions now patent between a system supposedly run for the benefit of all and one where profit and loss considerations are decisive. Hospital treatment is not free, but fees are very low, and well below the actual cost of treatment. However, the method of subsidy is such that the more patients a hospital treats, the more money it loses. So some hospitals now turn away patients, even in emergencies. According to one recent report from the south-west of China, doctors and nurses fought in the operating theatre over who should have the gallstones being removed from one patient — gallstones are a valuable ingredient in traditional Chinese medicines, and provide a convenient way for staff to augment their meagre incomes. Capitalism really does put a price on everything.

Just as in Russia, there is a flourishing black market in China: corruption and profiteering have become a way of life for some, and a part of everyday life for many more. Cigarette prices have been increased, with the unintended side-effect that private dealers take advantage of the fact that prices vary from place to place: they buy up popular brands and re-sell them at a profit in more expensive areas. Imported cigarettes are also subject to price speculation. High-quality liquor (costing over a month's wages per bottle at the new higher prices) is bought mainly by firms and various other organisations, presumably as perks for top employees or potential bribes. Such institutional "living it up" has been particularly frowned on, the government having ordered a reduction of spending and prohibited the use of top-class hotels for receptions and banquets.

In the first nine months of 1988, the retail price index rose 16 per cent. Economics spokesmen have complained that the economy is “overheating", with industrial output racing ahead of the production of energy and the capacity of the transport system. In a so-called planned economy, the number of state-run construction projects has had to be curtailed drastically. And a rise in imports has created a massive trade deficit.

Cancelling the construction projects does not just mean fewer luxury hotels, for those who would have been working on them (an estimated 13 million) will instead be returning to the countryside to put further stress on rural employment and living standards. The price at which the state purchases grain (wheat and rice) has stayed low, but has still been too high in many areas where local governments have put resources into construction projects. Consequently, some farmers have been paid not in money but in government lOUs. which do not provide clothes or heating. At the same time, grain imports have reached an all-time high. But 20 million peasants are officially reported to be short of food, after the fourth poor grain harvest in a row. A small minority of rural entrepreneurs have become extremely rich under the new regime, while others are forced to abandon their fields as fertiliser prices soar beyond their means. In other cases, the low grain price means farmers prefer more lucrative crops. But less grain also means less animal feed and so less pig-raising, hence the reintroduction of pork rationing in many cities.

As some workers return to their homes in the country, others head for the big cities in search of work. In Beijing there are nearly half a million so-called "vagrants" who have been there for over three months. Most sleep rough and exist on restaurant leftovers. Beggars are now a common sight in many Chinese cities; some disabled people are forced to beg because they cannot get a job or adequate welfare support. And the flood of overseas visitors has combined with the grinding poverty experienced by so many to cause the reappearance of prostitution.

In September, the free-market guru Miltom Friedman was warmly welcomed in Beijing. As he shook hands with party boss Zhao Ziyang, Friedman may have been reflecting that the two of them had plenty of common ground to discuss.
Paul Bennett
Posted by Imposs1904 at 6:59 AM