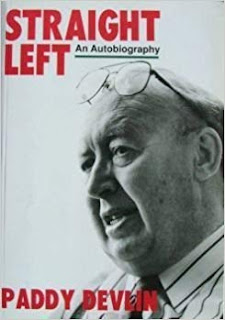 Book Review from the February 1996 issue of the Socialist Standard

The vanity that induces someone to think that the public wants to know about their life is well to the fore in this autobiography. The story of a ghetto kid who saw a future in ward healing politics — which, for some undisclosed reason he associates with socialism — is told in a tidal wave of personal pronouns.

There is usually a story in the life of every working class youngster who finds diversion in cheating the reality of poverty and privation. When that life is lived in a Belfast sectarian ghetto, an extra dimension of religious bigotry and strife is added to life’s miseries which, in turn, heightens the need for those forms of escapism which Devlin’s portrayal of his formative years illustrates so well.

But bigotry is no joke and, in Northern Ireland, it frequently carries a gun or a bomb. Here it is composed of the naked viciousness of a primitive Calvinism which, while most reflected in the crude politico-religious vapourings of Paisleyism, has to some extent infiltrated all the Protestant denominations, and that particularly virulent strain of Catholicism which is essentially Irish.

Both, after the fashion of mainstream religion elsewhere, are on the march to what is effectively their end. In Northern Ireland, however, legend, tradition and very deliberately inculcated ignorance artificially respirates these evils into an ugly tribalism that represents the politics of the province. The inadequacies of capitalism, especially in housing, employment and education, act as a convenient catalyst for these malignant forces in the hands of bigots like Paisley and Adams and their religious or political fundamentalist cohorts — who. if local politics demanded any degree of intellectual integrity, would have long since been marginalised.

It is the consequences, political and economic, of this politico-religious mishmash that has formed the background to the mayhem that has given Northern Ireland a central place among the world's trouble spots over the past twenty-five years. Devlin played a central part in the events that led to the present troubles and, while he relates faithfully the bigotry and intransigence that made the Unionists into destroyers of their own cause, he fails utterly to appreciate the part which the false analysis of the Civil Rights movement contributed to the Northern Ireland tragedy.

The leaders of the Northern Ireland Civil Rights Association (NiCRA). rightly accused the Unionist government and party of maintaining a regime that discriminated against catholics in the distribution of jobs, housing and local government votes. The inevitable assumption among working class protestants was that they were privileged in these areas — which they were not — and that the demand for a fairer distribution of these needs with catholics represented a threat to their alleged protestant privileges.

Socialists see the imposition of poverty in any of its aspects (jobs, housing, education etc.) on any grounds whatsoever — even when it is given apparent legitimacy by being called ’selection’ — as a feature of capitalism. Within the ambit of that system’s production for profit ethos, scarcity is an inevitable feature. Capitalism cannot exist without poverty, without unemployment and without penalising those who, for whatever reason, do not offer the profit system the maximum surplus value.

However Devlin may protest his ’socialism’, he was at one with those in the NICRA who identified the problems in religious terms; the problems were, they argued, caused by Unionism. Certainly, corruption and maladministration resulted in the uneven distribution of capitalism’s miseries but the miseries themselves were the political and economic consequences of capitalism. Unfortunately, the NICRA analysis led to conflict on religious lines within the working class when an essential part of the solution lay in the unity of the working class.

Like many pseudo-socialists, Devlin has a recidivistic contempt for the lessons of history. The failure of good intentions, Keynesian 'magic' and reforming zeal to remove the social ugliness of capitalism should drive him to consideration of an alternative form of social organisation, such as socialism — defined as it was before its wilful perversion by earlier groups of ward healers who thought they could make a system based on exploitation of the working class function in the interests of that class. Such consideration would, of course, be an admission of failure and acknowledged failures do not write autobiographies.

If you can stand the dreadful political ignorance of someone who suggests that the SDLP is/was associated with socialism, that the Northern Ireland power-sharing Executive of 1974 is a model for the (socialist?) future and that the Workers Party is a Marxist organisation, then the rest is interesting and factually instructive about events in Northern Ireland especially since 1968.
Richard Montague
Posted by Imposs1904 at 7:34 PM