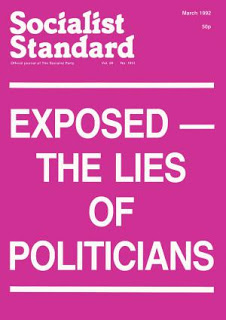 In the introductory piece in your January article reference was made in passing to the “modest” economic requirements of a typical worker including a car and an annual holiday. The question is could these be provided under socialism (or any system) for the population of the entire world, currently over 5 billion and likely to double in a few decades?

The latest figures I have seen for the world car “population" are 450 million, or slightly less than one car for every 10 people. These are said to produce directly and indirectly 30-40 percent of the worlds greenhouse gas emissions. In Britain the car population is roughly two to every five people. If the world's population of motor vehicles were raised to the same level this would come to 2 billion vehicles, over four times the present level.

My contention is that even if it were possible to produce the vehicles (and the roads, etc to go with them) the Earth's environment could never stand it.

In the advanced capitalist countries most workers aspire to and, to a large extent, have these things, which means they are unlikely ever to vote for socialism. True, capitalism probably cannot sustain its present level of luxury production without causing ecological catastrophe and the workers of the “advanced" nations may then change their attitude. But socialism, capitalism or any other system will be irrelevant on a ruined, possibly dying planet.

Reply:
It is capitalism, not overpopulation as you state, that is the cause of present-day pollution, resource depletion and environmental degradation, and, even if population growth were to become a problem in terms of putting pressure on the Earth's resources, it would only be within the framework of a world of common ownership and democratic control that such a problem could be tackled.

Similiarly, if your pessimism were to be confirmed and capitalism really did bring ecological catastrophe, then socialism would still be relevant as only a global approach treating the Earth's resources as the common heritage of all humanity would provide any chance of minimising the damage and saving what could be saved.

With regard to cars, you overlook two things. First, it is technically possible to produce cars that don't pollute the atmosphere. Secondly, that access for all to means of individual transport could be provided without this having to involve everyone having their own car. Non-polluting cars, such as electric ones, are not produced on a mass scale today because of the profit considerations and vested interests that exist under capitalism.

Access to a car offers house-to-house flexibility that no other form of transport can provide. So it is a reasonable demand, and we can envisage it being met in a socialist society by free taxis and mini-cabs as well as by individuals having access to a pool of cars kept available in their neighbourhood for use without charge as and when needed for specific journeys. Also, the situation would be transformed in that the need for car usage would be reduced by the existence of a comprehensive and efficient public transport system.

Capitalism is constitutionally incapable of tackling the transport question in a rational way since under it production is carried on by profit-seeking enterprises all competing to maximise their profits. Individual car ownership is encouraged because there is more profit in this than in providing an adequate transport system. Cars run on petrol because for the time being, and by the short-term perspective that capitalism takes, this is the cheapest fuel available. Competition forces manufacturers to produce as cheaply as possible, so the best anti-pollution devices are not installed in cars. None of these anti-social considerations would apply in socialism.

I would like to enquire as to your party's attitude to struggle and participation in broad campaigning movements.

I think I understand your view that the only effective and proper way to remedy the ills giving rise to such movements is the abolition of capitalism and its replacement by socialism. The argument being that such movements merely respond to the effects of capitalism, expressed in various forms of injustice and oppression, and ignore the basic underlying cause, the class exploitation inherent in capitalism.

Given this, I wonder what is expected of members of the Socialist Party. Do they participate in such movements as Anti-Apartheid and CND but argue from within that fighting for their limited objectives at best diverts from the important task of winning workers for socialism and at worst sustains capitalism by generating illusions about improving it? Or should they stand well apart from such reformist diversions and rely solely on the platforms offered by Socialist Party meetings and publications like the Socialist Standard?

I can see how the latter option has the advantage of principle and avoids possible confusion about the role of party members should they be active in broad movements. But it could be argued that by adopting this purist approach, the Socialist Party is unnecessarily isolated from important arenas of struggle and depriving itself of access to those who, through their own experience of struggle against the effects of capitalism, should prove more susceptible to the case for replacing it completely with socialism.

If you do not expect Socialist Party members to participate or support these broad movements, does the same apply to the relevant trade unions at their place of work? Although trade unions are wholly limited and defensive, they do have a definite class basis in the sense they seek to organise workers selling their labour power to a common employer or group of employers. If party members are expected to join trade unions, how do you summarise their role within them and how does this differ, if at all, from playing an active part in the broad movements mentioned above?

By joining a trade union, one is implicitly endorsing the struggle to defend wages rather than seeking the abolition of the wages system itself. How docs the Socialist Party resolve this contradiction? I find it difficult to imagine how a party advancing the interests of the working class can stand aside from such key mass working class organisations and yet I do not see how any alternative position could be consistent with your approach to other broad movements.
Andrew Northall
Kettering

Reply:
The Socialist Party exists to encourage the working class to establish socialism by democratic political action. We are a political party which advocates socialism and nothing else. Members join on this basis and we are in effect a body dedicated exclusively to spreading socialist ideas by all available means—meetings, pamphlets, leaflets, phone-ins. personal conversations.

As a political party our field of operation is the political arena. Here we oppose all other political parties since they all seek to reform or manage capitalism in one way or another while the only form of political action we support is political action for socialism. This is why we also do not support or join what you call “broad campaigning movements” which, without aiming at winning political power themselves, aim to bring pressure on governments to adopt certain policies or enact certain reforms. In this sense they too are reformist, and the argument we put against them is the one you outline in the second paragraph of your letter.

This does not mean, however, that we "stand well apart" from such organisations in the physical sense and rely solely on our own meetings and publications. We attend their meetings and demonstrations to make contact and discuss with those involved in them, with a view to pointing out that only in a socialist society will the problems they are rightly concerned about be able to be solved. Indeed, many of our own members first came into contact with socialist ideas in this way.

Trade unions, on the other hand, are not political organisations but organisations formed by groups of workers to negotiate their wages and conditions with employers. Workers in employment have to bargain over the sale of their productive skills and it is clearly better that they do this collectively rather than individually (“unity is strength"). Members of the Socialist Party do participate in trade unions (and similar bodies such as tenants associations, student unions, parents associations, claimants unions), but as individual workers directly affected not as party members carrying out some "Party line". We do not practise "entryism" like the Trotskyists who infiltrate organisations with the aim of taking them over. On the contrary in fact; our members always insist that such organisations should be run on a fully democratic basis and on the need to avoid being manipulated by politicians and politically-motivated groups. We are, for instance, opposed to unions being affiliated to the Labour Party.
Editors.