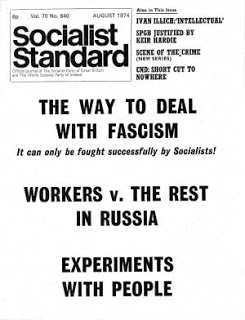 Get it right. Fascism is not an economic and social system different from capitalism. It is a political faction possessed, as they all are, with the idea of a method which will make capitalism run to order. Its policies are both absurd and detestable, but are far from unique and are variously shared with the other pro-capitalist parties.

Don’t be misled either by the persistence of “fascist” as a political swear word. Any opponent or inconvenience to the Left is a “fascist”: fascist thug, fascist reactionary, fascist warmonger etc. — the alleged thuggery, reaction and militarism thereby being made a special and more fearsome kind. This is part of the verbal hallucination in which left-wing organizations live. It is interesting that the other great condemnatory term, “Trotskyist”, has now dropped from the Communists’ vocabulary. Why? Because the Communists now collaborate with the Trotskyists in industrial agitation (and, of course, in anti-fascism).

Attacking (and therefore publicizing) fascism has been good business for the Communist Party. Unable to get anywhere by industrial militancy, its membership hung round 4,000 until campaigns against fascism — by fighting Mosley’s party in the streets, by making a crusade of the Spanish Civil War, and finally by supporting the Allies in the 1939-45 war — raised it to several times that number. Its successors, likewise unable to make much impression by other kinds of agitation, have obviously taken note.

Pre-War and Now
The term was the name of Mussolini’s movement started in Italy in 1919 — the Fasci di Combatti- mento, which took power as the National Fascist Party in 1922. By 1936 imitative governments existed in Austria, Hungary, Poland, Rumania, Bulgaria, Greece and Japan. In 1939 Franco’s Falangists took power in Spain; and there was, of course, Germany. It survived World War II only in Spain and Argentina, where a group which included Juan Peron became the heads of government in 1943.

The pre-war fascist movement in Britain was Sir Oswald Mosley’s British Union of Fascists, formed in 1932 as an amalgam of several small groups. Its membership was never large, and had a high proportion of adolescents; it published a paper called Action, and its main activity was the staging of marches and rallies. In 1940, soon after the outbreak of war, Mosley and the other leaders were imprisoned and the BUF’s existence ended. The rank-and-file members, so far from defending or acting for Germany and Italy, joined the forces and fought in the war professedly against fascism.

Mosley attempted a revival, the Union Movement, in 1948, and other neo-Nazi or racist groups had patchy existences before the formation of the National Front in the late nineteen-sixties. In the General Election this year the National Front put up 53 candidates who averaged 1,436 votes (as against the Communist Party’s average of 780, WRP’s 466, IMG’s 238, and the Marxist-Leninist Communists’ 237). This support, small as it is, is almost entirely for the National Front’s racist propaganda. Fascist organizations’ policies have always been to exploit working-class and petty-capitalist misconceptions of their grievances. In the ’thirties the scapegoats were Jews, Freemasons, Catholics, the trade unions (linked with “communism”), bureaucracy, and the big corporations. The list is not very different today except that the black immigrant population has taken the chief position.
Vicious attitudes joined to a promise of repressive government naturally rouse indignation and the determination to oppose them. The demonstration of 15th June produced numerous letters to newspapers insisting that fascism be suppressed for fear the horrors of the last generation be repeated: or alternatively, that left-wing activity be suppressed because that is what drives people to support fascist movements. In both cases the argument is of “the lesser evil”, and it ignores the cause and the answer to fascism.

Causes & Compulsions
The single cause of the rise of fascism in the nineteen-twenties and thirties was the inability of reformist governments to cope with capitalism’s problems. In the preceding years, parliamentary representation and the franchise had spread to practically all the developed countries, and Liberal or Labour parties had been in power with extensive reform programmes. They had, inevitably, failed; there had been crises, mass unemployment and extreme poverty instead of the promised benefits.

What was conveyed therefore to large numbers of people all over Europe was that democracy was a washout, and they were ready to listen to demagogues who affirmed this and would attack the alleged scapegoats. The dictatorship regimes are usually said to have “seized power”, a phrase which obscures the fact that they were supported and elected by the majority of workers in their countries. Of course they were supported by sections of the capitalist class too, who have no fastidiousness in backing the best agents for their interests. But the poison was laid by the Labour and other parties who misled the working class with their policies of trying to reform capitalism instead of abolishing it; and they, of course, are still at it.

Undoubtedly some will say that, whatever the cause of fascism, it threatens those it singles out. Jews and black people in particular are likely to think they must oppose it as a matter of self-preservation. However, it is not so simple. Many Jews supported the Communist Party for its anti-fascism in the ’thirties — only to find that Jews were (and are) persecuted in Russia as well as by fascism. The modern history of the United States shows that you do not have to live under a dictatorship to be victimized or killed for a belief or a skin-colour.

Capitalist governments and parties will oppose fascist ones — but only when it suits them. For all the propagandist talk, the last war was not fought over ideas by either side: the compulsion was commercial rivalry in world markets. The horrific discovery of the German concentration camps provided an apparent justification in retrospect, but in fact the camps’ existence and what was happening to Jews in Germany were known in Britain in the nineteen-thirties and largely discounted. Hitler and Mussolini were praised by ruling-class politicians, including Churchill. And the trigger for the outbreak of war was the German attack on Poland — a country which itself had a dictatorship.

Changing Policies
Fascist parties are no more able than social-democratic or liberal ones to deal with the problems and resist the pressures: they are themselves reformists. Of the Mussolini government, H. Kohn tells us in the Encyclopaedia Britannica:

The standard of living and the real wages of the Italian workers and farmers remained extremely low in comparison with other European countries throughout the 20 years of the Fascist regime. Nevertheless, the Fascist leadership did not cease painting a picture of coming Italian grandeur for the benefit of the Italian masses.

The Nazi régime was more fortunate in that it could claim a substantial reduction in unemployment, because its establishment came immediately before a period of capitalist expansion following the 1929 depression. But Peron’s downfall in 1955 came at a time of severe economic difficulties in Argentina and a sharp rise in the cost of living.

The classic question put to Socialists, what would we do if fascism arrived here, has to be seen in this light. Under the pressures of capitalism, fascist policies are no more certain than any others. Before achieving power Mussolini completely abandoned the anti-monarchist and anti-Catholic programme on which his movement had been built up. The Italian and Japanese régimes had no racist policies, and anti-Semitism was described as “an absurdity” by Italian fascist leaders until 1938 when the German racial theory was adopted, for obvious reasons. On the other hand, the Nazis after their pact with Russia in 1939 cancelled attacks on Communism, which until then was declared their arch-enemy; diatribes against “Jewish communism” gave way overnight to ones against “Jewish capitalism”.

In that connection, Mosley never declared his or his organizations’ position to be specifically anti- Jewish, clearly seeking to keep the options open. The programmes of the British Union of Fascists and the Union Movement were a rag-bag of reforms gathered from Mosley’s earlier days in the Labour Party, the ILP and the New Party, and the National Front’s programme apart from “Keep Britain White” is a repetition of the same rubbish. It is worth noting too that Mosley pinned his hopes, as most left-wing organizations do, on the “collapse of capitalism”. His postwar book The Alternative named 1948 or 1949 as the year, and further predictions of the “inevitable” catastrophic crisis continued until the early ’sixties.

The element which has remained constant in all fascist governments and programmes is the one-party state. It is not a prospect which Socialists would welcome, to say the least, but some observations about it are important. First, the monopoly in it is held not by fascism but by what is called communism in Russia, China, Cuba and the east-European countries. Second, dictatorships like other governments are dependent on the assent of the ruled. Third, physical suppression has never prevented the formation and circulation of ideas. After the Austrian social-democratic paper Arbeiter Zeitung was banned and severe penalties for possessing it were imposed in 1934, it was produced in Czecho-Slovakia and then in Paris, and two years later had a bigger circulation in Austria — over 60,000 — than any legal newspaper. We ourselves have experience in two world wars of carrying on under prohibitive conditions, with members in prison and Socialist literature under restraint.

Effective Action
In 1937, when calls were made for a “Popular Front” of anti-fascist organizations, we said:

The safeguard against fascism is Socialist understanding. The working man or woman who has it cannot be taken in by nationalism, racism or reformism — or by anti-fascism, which is the same thing with another name. The present-day fascists are hoping that, like their predecessors, they will thrive by others taking their bait: partly in publicity, partly through attacks on them heightening concern about disorder and causing a reaction in their favour.

It is a mess, and an ugly one. But there is a solution — Socialism.