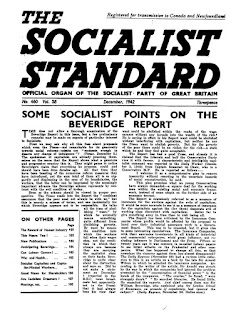 From the December 1942 issue of the Socialist Standard

Thirty years or so ago it was common for the kindly and the ill-disposed to describe Socialists as dreamers, and thereby wipe them out of the sphere of practical politics. With the passing of the years the efforts of the Labour Party and similar organisations have led to a misunderstanding of the meaning of Socialism. Thus in the minds of many Socialism is wrongly identified with social reform and hence is accepted as practical. But Socialism is not Social Reform. They are opposites, and all the social reform in the world will not bring Socialism. Social reform presumes the existence of the present social order, which Socialists are organised for the purpose of abolishing.

Taking Socialism, then, in its real sense, as a system of society based upon the common ownership of the means of production, are Socialists dreamers, dreaming of a state of affairs that may or may not come, and, anyhow, is a hundred years or so away ?

As Socialists we insist that we are practical, that we are working for something now and not in the dim and distant future. In fact, we insist that, from the workers' standpoint, we are the only practical people because we have the solution to all the economic evils that baffle our rulers, and our solution is one that can be applied now. To apply this solution all that is needed is the understanding by the majority of the workers of the few basic ideas set out in our Declaration of Principles.

When the taunt is flung at us that Socialism, as defined above, is a dream, what the users of the phrase mean is that the workers have neither the capacity to understand nor to apply Socialist principles, and that Socialism, as a system, is not capable of being run by human beings.

The answer to the last objection is a simple one. Present society in all its fundamental aspects, that is to say, in the production and distribution of all that ministers to the needs and the luxuries of people to-day, is the work of the workers. The people who “direct," no less than those who produce, are members of the working class; they belong to that part of society which depends for their existence upon selling the energy of hand and brain for wages or salaries. If they can do this work for a dividend-drawing group of idlers they will be able to do it much more easily when it is being done for a society in which all work according to their capacities and receive according to their needs.

With the present standard of education an understanding of Socialism is within the capacities of all sections of the working class. One reason that has prevented the workers from getting to grips with Socialism is the existence of groups who claim to have found short cuts to prosperity within the present system and waste the time and attention of large bodies of workers in the chasing of will-o’-the-wisps or exploring blind alleys.

Socialist ideas are spreading wider; even the much derided “Capital’’ by Karl Marx is now accepted as a classic, and Socialists are no longer treated as cranks. The insoluble contradictions of capitalism, with its glaring evidences of wealth and poverty, its inability to plan production and distribution or to abolish unemployment, except under the stress of war, are factors that are forcing the workers into a frame of mind to appreciate the Socialist message. Reform movements are losing their appeal to the workers’ imagination and capitalist apologists of all kinds are being forced back not only to the task of trying to give practical answers to fundamental questions but also to giving lip service, at least, to some of the views put forward by Socialists. They may believe they have prepared ground to which to retreat after the war, but they will not find the retreat as easy or as permanent after this war as it was in 1918. For, however slowly the workers’ understanding may appear to be moving, it is most certainly moving steadily and in the right direction.

There are some who shrink at the thought of social change and the overthrowing of established forms. Let them take heart. Revolutions are terrible things. They shake society up like an explosion. But the Socialist Revolution, unlike an explosion, will not shake society to pieces; it will simply break the shackles of property and, with them, the ties that bind down the majority of people to lives of unending toil in return for the mere necessities of existence.

Socialism offers a quick, easy, and certain road out of the economic evils that afflict the workers to-day. For its accomplishment it requires the understanding and mutual co-operation of the mass of the workers. It has already made giant strides in this direction. Its accomplishment is inevitable because the capacity of the capitalists to divert the attention of the workers from the source of present evils is rapidly diminishing. Thus it is not the Socialists but their opponents who are the dreamers.

Email ThisBlogThis!Share to TwitterShare to FacebookShare to Pinterest
Labels: Criticism of the SPGB, December 1942, Gilbert McClatchie, Objections to Socialism, R1942