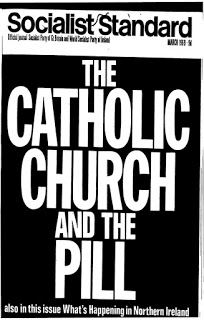 From the March 1969 issue of the Socialist Standard

Mussolini’s massacre of the Abbysinians, Hitler's systematic murder of the European Jews, the American slaughter of Vietnamese—none of these atrocities, or others like them, caused more than mild rumblings in the Roman Catholic Church—and yet Catholics were deeply involved in all three. But the use of "the pill” has caused a series of explosions which threaten to blow it apart at its rotten seams. The contrast would be laughable if it were not so tragic. The Pope’s ruling on oral contraceptives has caused more Catholics to question the authority of their church than any other event this century. It has called forth more jokes than the Profumo affair. And the jokes and arguments have arisen because people are struggling to understand and digest a seemingly absurd situation. For thousands of Catholics it was a shock situation, because the pill seemed to offer the answer to all the objections that the church had raised to mechanical or chemical contraceptives. Many of them were already using the pill in expectation that the Pope would bless it, and there was a powerful lobby of bishops and influential lay Catholics urging the Vatican to take this decision. When finally, after long delay, and against the majority advice of his own Commission, Pope Paul’s encyclical forbade its use by Catholics, the reaction by Catholics and non-Catholics alike was close to incredulity.

That was seven months ago. Many non-Catholics have already forgotten it—or at least they would have done if it had not been for the way Catholics are still reacting. For many, particularly in countries like Holland, France and Britain, the resentment and disappointment have led to a continuing series of minor rebellions on other issues such as the celibacy of priests, the virginity of Mary, and the dominance of Rome. It is plain now that the Vatican must prepare for many years of dissent and controversy.

To Protestants who (loudly or quietly) detest the Vatican, it has been a matter for a certain amount of temperate glee. For non-christians and atheists it has given a satisfying sign that religion is losing its vice-like grip upon people's minds. Socialists, however, have found the whole pathetic comedy interesting and in a more complex way than it has been treated in the press and in casual conversation. Socialists oppose religion, including Christianity, not chiefly because it is wrong in its beliefs—this does not matter very much— but because religion is used as a powerful propaganda medium for persuading the working class all over the world to accept and even actively support the capitalist system which cons them out of all the wealth they produce, and uses it often in waste and violent destruction. The Roman Catholic Church, however, has always had a two-faced attitude towards capitalism because the Church’s period of greatest power and influence, over individuals and states, occurred in the feudal era, before the succession of capitalist revolutions swept through Europe. In its organisation and beliefs Catholicism is still largely feudal, but as capitalism triumphed, so the Vatican jettisoned those of its principles and practices which would have interfered with its wealth and political power. By withdrawing its condemnation of usury as a sin, the Vatican has become the world’s largest single shareholder—well over the £2,000,000,000 mark, and it remains the wealthiest owner of land and art treasures. But it fought tenaciously against the liberal elements in rising capitalism which would have cut its revenues, prevented its control of education, or interfered with its grip on the reading, the family life or the political allegiance of millions of Catholics. It is a fact that in all countries where the Vatican has retained major control capitalism has advanced least, living standards have remained low, and government repression has been ruthless.

This does not alter the fact that in Protestant countries the freedom of the individual which capitalism brought, and which the Protestant religions justified with their newer interpretations of Christianity, was chiefly the freedom for capital to exploit labour to the limit. Hard work became one of the greatest virtues (for the working class), and the freedom of the individual in the eighteenth and nineteenth centuries included the freedom to starve. In other words, freedom is very valuable for those who have the wealth to enjoy it, but for most members of the working class, even today, talk of freedom is largely academic when it is set against their over-riding unfreedom—the iron necessity of selling themselves to a boss for the best part of their lives. In fact the long list of ’’freedoms” that capitalism has been responsible for all become double-edged when they operate within a capitalist society, because in so far as they make workers more free they also make them more available for exploitation. This applies to birth control just as much as all the other scientific and social developments of capitalism. The freedom to have children or not is an ironical gift when it means that a couple are free to have no children at all because they can never afford to stop or work or settle in one place. In Socialism, on the other hand, where there will be no classes, no exploitation, and no states, an invention like the contraceptive pill will really add to people’s freedom by giving them more control over nature and their own future.

On the surface some of the Catholic attacks on the use of the pill sound like socialist criticisms. For example Socialists can detect a measure of truth in the warning of the African R.C. bishop who asserted that the pill was being used as a weapon against the underdeveloped nations by the large industrial nations. But these are red herrings. Even if there were no such dangers the Catholic Church would still be opposed to anything which led to greater individual freedom and opposed to the pill in particular because it threatens to undermine the Church’s control over its members and its influence over governments. This was the real dilemma which made the Pope hesitate for so long. The pill, as the best contraceptive invented so far, has brought the Church into direct conflict with the march of modern capitalism. And, either way, the Church must lose. The bishops rail against the possibility that control of people’s sex lives may pass into the hands of the State, but this is because, for Catholics up to now, it has been in the hands of the Church. By prohibiting contraception as well as divorce the Church has ensured large families of Catholics—particularly important in the growing countries of South America; it has kept women tied to child bearing and rearing, and so economically dependent upon men and subordinate to them; it keeps fathers hard at work providing for such families or else in and out of the confessional box atoning for a succession of infidelities; and it keeps the sense of sin oppressive and ever-present. This not only reinforces the importances of priests but convinces the priest themselves that in living celibate lives they are not sacrificing a great deal. All of this would be substantially weakened if the Church allowed the dissociation of sex and childbirth by sanctioning the use of contraceptives. In fact the process of weakening has already begun, and it looks as though, by giving an adverse verdict after waiting so long, the Pope has set in motion a more rapid break-up of the Church than if he had approved. But sooner or later it was inevitable. Opposed to the pill, the Catholic Church is likely to be broken by schism; if it accepts it eventually, it will become a changed institution. Any institution which becomes an obstacle to the wages system will suffer in the same way. Catholicism backed the family and capitalism is changing the family. It may even dissolve it altogether. It needs women out at work, free and mobile like men—free to be wage-slaves. And the pill has hastened the process considerably.