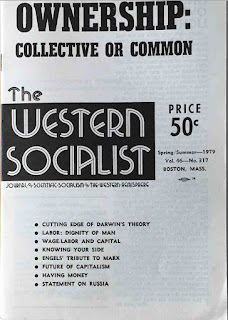 From the Spring/Summer 1979 issue of The Western Socialist

The Christian Science Monitor, in five issues (13-19 April, 1977) published a series of articles by their business and financial editor, Mr. David R. Francis, on “The Future of Capitalism.” In them he told of capitalism’s present difficulties and the discontents created, summarised the views of numerous businessmen and economists, and outlined the changes already taking place and proposed for the future.

In one important respect the exercise was bogus. While pretending to give an objective and comprehensive account of the arguments for and against competitive private capitalism government planning and nationalisation, reforms of capitalism and alternatives to capitalism, nothing was said about the Marxist-socialist alternative to capitalism. There was indeed no indication that Mr. Francis and the people he quoted had ever even heard of it; and this includes Mr. Michael Harrington, Chairman of the Democratic Socialist Party, U.S.A. All of them accept continued production of commodities for the market and for profit, the existence of an owning class and a working class, and the division of the world into capitalist nation-state competing against each other — in short, capitalism.

The lead-in to the first article set the tone of everything that followed. It told the readers that those who challenge capitalism say “it is outdated and unresponsive but see the standard alternatives, communism and socialism, as too old-fashioned and conservative, too bureaucratic and inefficient.” This is a grossly misleading statement because, as Mr. Francis spelled out in his articles, the “communism and socialism” referred to are state capitalism with dictatorship, as in Russia, and the mixture of private and state capitalism administered by Labour governments, as in Britain.

No doubt Mr. Francis would offer the usual defence of this misuse of terms, which goes like this. Since the great mass of people (never having studied or thought about the matter) accept that capitalism means only private capitalism; that socialism means nationalisation, and communism means the Russian dictatorship, he, Mr. Francis, is merely following common practice in doing the same. An ingenious disclaimer of responsibility which, however, fails for several reasons.

In the first place, what has happened to the claim always made by columnists and economists that it is their elevated purpose to inform their readers, not encourage their misinformation?

Secondly, the Monitor articles include numerous references to Marx and Marxists (though without quotations of anything Marx actually wrote) so why didn’t Mr. Francis recognise his obligation to see that Marx’s own case against capitalism and Marx’s own alternative should be represented?

Or did he perhaps shop around to find someone to put that case and fail to find one? That is easily remedied. The W.S.P. of the United States would be delighted to put the case in the Monitor’s columns against the whole lot of Mr. Francis’ defenders of reformed or unreformed capitalism.

For the record, and in case Mr. Francis still believes that he dealt with Marx’s case, may we remind him that, for Marx, Socialism/Communism involves, among other things, the abolition of production for the market (“the abolition of buying and selling” — Communist Manifesto) and the abolition of the wages system.

A word here about the “socialist,” Mr. Michael Harrington, whose views are quoted by Mr. Francis. The New York Times (5 May) reported a speech made by Mr. Harrington on the question of the future of capitalism. He associated himself with Marx (“my friend Karl Marx”), then went on to show that his own "alternative” to capitalism includes the continuation of production for the market — that is, capitalism:

"Mr. Harrington indicated that he was a friend of the market, as preferable to bureaucratic controls — provided that income was distributed equally.”

It is clear enough that when Mr. Francis uses the term socialism he does not mean what Marx and socialists mean. But what he actually does mean Is left in doubt. First to wrote:

“Socialism, if the word is taken to mean state ownership of the most important means of production . . ."

Then (also in the first article) he quoted from Mr. Peter Drucker: “The United States is the first truly socialist country”; but added “whether it is socialism is a matter of definition” — so why did not Mr. Francis give us his own definition?

What seems to be happening in the U.S. is what happened long ago in Europe. If the workers are becoming increasingly disillusioned with capitalism, why not distract their attention from socialism by offering them state capitalism labelled socialism? Bismark did it in the 1870’s, which led Engels to dub nationalisation “a kind of spurious socialism.” In England, a little later, a prominent capitalist politician, Sir William Harcourt (and his friend the then Prince of Wales later Edward VII) played the same game with the slogan “we are all socialists now.” It would not have mattered much except for the fact that, both in Germany and England, men who had called themselves socialist lent themselves to the deception. People of this type feature in the Monitor articles.

Several misconceptions of Marx occur. His materialist conception of history turns up in the guise of “determinism” and ‘inevitability”; with the assurance that “even confirmed Marxists” now reject that (as indeed they should).

The labour theory of value is misrepresented as holding that “manual labour” is the sole source of wealth. It has, we are told, been replaced by recognition that wealth is produced by “applied science” and “the level of thinking.” Are we to suppose that “thinking,” studying, and applying science, are provided from outside the members of the working class? If so, by whom?

In the article on April 19 Mr. Francis made the statement: “Marxism has proved to be a dead end in the development of economics.” No explanation was offered but we may assume that it refers to the “old-fashioned” “conservative” “bureaucratic” and “inefficient” state capitalism, promoted, for example, in Britain by Labour governments. For the information of Mr. Francis, Marx’s economic theories have had no influence whatever on the British nationalised industries, either in their formation or their operation. How could it be otherwise since the British Labour Party has been wholly and blindly Keynesian for 40 years? In their leadership, as in the Universities, ignorance of Marxist economics is almost total.

The articles contained a formidable list of suggested remedies for the ills of capitalism — more nationalisation, the development of state-operated health and welfare services, workers to sit on boards of directors, workers’ pension funds to extend their ownership of corporation stocks and seek control of corporation policy, government curbing of the freedom of action of big companies, encouragement of small companies, government management and planning of the economy, and so on.

With the exception of worker directors (now being borrowed from Germany by the British Labour Government) nearly all these expedients have been tried in Britain — with total failure. They have not provided “jobs for all,” or eliminated depressions, or abolished poverty, or brought industrial peace and contentment to workers in state capitalist industries. What they have done is to raise prices to 900 per cent above the 1938 level, with a faster rate of inflation than ever before in the history of British capitalism and with living standards falling in the last three years. (Mr. Francis could learn from Marx how and why this happened).

Application of all these “remedies” has not materially affected the character or operations of British capitalism and recent elections have shown that the majority of workers do not feel that their problems have been solved thereby.

The Monitor articles have a certain interest for what they do not contain. Mr. Francis and many of those whose works he quotes seem to think that it is only now that capitalist spokesmen are fearful that their system has an uncertain future. On the contrary, in every big depression in the past century and a half, certainly in Britain, businessmen, politicians and economists have seen collapse and revolution round the comer, and wondered what they could do to be saved.

It is also curious that the last great saviour of capitalism, J. M. Keynes, does not present a remedy in the articles. Forty years ago he was supposed to have revolutionised economics to be unscientific and without application in the modem world. So why the need for Mr. Francis to go looking high and low to find a new saviour? What he is tacitly admitting is that Keynes has proved to be as helpless as all his predecessors to turn capitalism into a social system satisfactory to the working class.

1. Lavatory of British, Swedish and German socialists; 2. Their success in outanswering communists; 3. Those socialists are hungry for new ideas.

Their summary: “Most Americans would be jolted if toe told them that two European leaders were socialists" — Need we say more?