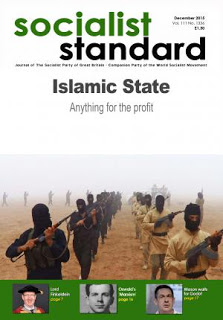 Kill capitalism
You want to know more about socialism, who are you gonna call? Jeremy Corbyn? Antonio Costa? Bernie Sanders? No, they can’t see beyond capitalism. You will learn more from the console/computer game Assassin’s Creed, where Marx’s call for workers of the world to unite is repeated along with the following biography: ‘Karl Heinrich Marx (1818 – 1883) was a German philosopher, economist, journalist and sociologist considered the founder of the ideology of Marxism … Throughout his life, Marx published several books, the most famous of which are arguably The Communist Manifesto and Das Kapital. His work in economics laid the basis for much of the current understanding of labour and its relation to capital, as well as subsequent economic thought. Although many revolutionaries, such as Vladimir Lenin, Mao Zedong and Fidel Castro would later cite Marx as an influence, their fidelity to Marx’s ideas is highly contested’ (assassinscreed.wikia.com, accessed 7 November).


Same shit, different century
‘Communist [sic] dictator Nicolae Ceausescu’s iron-fisted rule of Romania was marked by several decades of brutal repression, fear and intimidation. But the most shocking details to emerge after his death were the conditions in the country’s orphanages — where thousands of emaciated and diseased babies were found slowly dying in filth infested cradles. Images of their plight shocked the world when broadcast in 1989. Now, 25 years on, these orphans have been found still living rough in underground sewers throughout the country — where diseases such as HIV run rampant and drug addiction is rife’ (dailymail.co.uk, 6 November). State capitalism then, crony capitalism today.


Cruising to Chernobyl
Capitalism can seem like a crazy system where war, waste and want exist alongside wanton excess. Yet these are endemic features of a form of society which has outlived its usefulness rather than crazy per se. However, the following news item suggests that exceptions are to be found. ‘Plans to link a chain of rivers and canals in Poland, Belarus and Ukraine may release radioactivity from the remains emitted by the Chernobyl nuclear power station disaster of 1986, environmental experts say. The project, which would complete a huge trans-Europe waterway, is designed to increase trade between the three north European states, and to foster tourism and encourage more environmentally-friendly freight transport … Andrei Rehesh, secretary of the Commission on the Development of the E40 Waterway, the European Commissions name for the trans-Europe link, told journalists visiting the canal near Brest of the regular trips made through the zone by the river craft. These take them within an estimated 500 meters of the Chernobyl plant itself’ (truthdig.com, 1 November).


Blood money
We would like to think that bear baiting is extinct, but it continues in Pakistan and the USA. Similarly barbaric, cock fighting takes place in many countries. One clue as to why is given here: ‘ at the Bangkok Cockpit in Samut Prakan, a province on the outskirts of the capital, a 1,000-strong throng cheers on a pair of avian fighters whose necks are locked in combat as bets furiously exchange hands … A few weeks later the same stadium raked in 22.2 million baht ($618,000) for a record-breaking bet, venue manager Banjerd Janyai told AFP. In this lucrative industry “good fighting birds” can sell for more than $85,000, he added, with Thailand exporting cocks to neighbouring countries such as Malaysia and Indonesia and buyers arriving from as far afield as France and Bahrain’ (news.yahoo.com, 1 November).


No pies!
Capitalism exists worldwide. Nearly one in four Americans have more credit card debt than emergency savings and two out of three exist paycheck to paycheck. Yet members of the 1% have money to burn. Take Kanye West for example. He ‘… spends a whopping £120,000 a YEAR on getting his hair done …’ (heatworld,com, 3 November). Clearly it is time for capitalism to meet its Sweeney Todd in the form of an enlightened working class.