The Rainbow Party and Its Vision of ‘Socialism’ (2015) 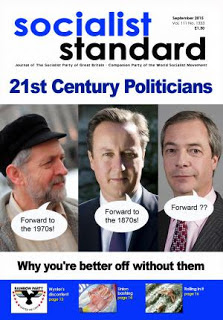 From the September 2015 issue of the Socialist Standard


Our correspondent in Zambia looks at local political developments

The Rainbow Party was formed by Wynter Kabimba way back in 2003. However, Kabimba ditched the Rainbow when he joined the Patriotic Front (PF) in 2009 and became its general secretary.

A lawyer by profession, he had strong objections to corruption and worked tirelessly to root out corrupt elements from the ruling party when it came to power in 2011.

He became more or less the second most powerful man in the PF, second only to President Sata. It was typical of him to differ with fellow cabinet ministers within the PF. This was especially the case when he published corruption allegations against Finance Minister Alexander Chikwanda and Geoffrey Mwamba, the Minister of Defence.

In 2013 he became embroiled in a tit-for-tat row with Mwamba that went unresolved until the latter resigned from the Cabinet in 2014. There were widespread calls for the removal of Wynter Kabimba from within the PF to which President Sata turned a blind eye.

Thus Wynter Kabimba became the political spokesman of the PF, explaining and defending the social and economic policies of the party.

It was Wynter Kabimba who advised President Sata to appoint Mutembo Nchito as Public Prosecutor in 2012 in order to remove the presidential immunity of former MMD President Rupiah Banda. It was alleged that Rupiah Banda and his son Andrew had swindled the Zambian government through a bogus oil deal signed between the Zambian government and Nigeria in 2009 to import crude oil from Nigeria. It was discovered by the Taskforce on Corruption that the government had paid huge sums of money for this but that the crude oil was not delivered to Zambia.

The political career of Wynter Kabimba took a nosedive in August 2014 when he was relieved of his duties as party secretary general and justice minister by the late President Sata. The departure of Wynter Kabimba had become a foregone conclusion and caused relief within the ruling party.

Dissatisfaction
The Rainbow Party is one among the myriad political opposition parties that were formed after the death of President Sata in 2014 to express dissatisfaction with the current political and social policies of the PF government under President Edgar Lungu.

The terminology of ‘socialism’ is not unique to the Rainbow Party, but is embedded in the political constitution of the PF. Dr Cosmas Musumali, the deputy general secretary of the Rainbow, recently said that the Rainbow Party would not hide that its focus was on workers, students, peasants and all progressive Zambians who have borne the brunt of capitalism since its ‘adoption’ (actually, moving away from state capitalism) in 1991 by President Chiluba: ‘If you look at the key documents of the PF constitution, you will find that under article 4, they are talking about socialism.’ According to article 4 of the PF constitution the party ‘shall wage a relentless fight against domestic and international forces of reaction. It shall fight for the eradication of capitalism, with its offshoots of hunger, ignorance, disease, corruption and the exploitation of man by man.’

Musumali went on to say that governance mistakes that have come as a result of capitalism should be exposed because remaining silent on the matter would be like giving ammunition to those who exploit others.

He said that Rainbow was not ashamed to expose the past failures of ‘socialist’ initiatives of the past:


‘For our part we believe in the future of socialism and we are not ashamed to expose the past failures because this is what gives us legitimacy. We went the capitalist route in 1991 and to date. In the past 24 years what have we achieved in Zambia?’

He further urged intellectuals in Zambia to familiarise themselves with the Rainbow Party’s manifesto and its social and economic programme.

It is a palpable fact that the Rainbow Part does not have a mass following among the workers, students and peasants in Zambia compared with the PF and the UPND. The ‘socialist’ ideas which are being parroted by the Rainbow Party do not echo well among many ordinary Zambians in the sense that the words ‘socialism’ (‘communism’) bring memories of police brutality, suppression of political opposition and indiscriminate political detentions that characterised the one-party  so-called ‘socialist’ state under Kenneth Kaunda.

We in the WSM look askance at the ‘Marxist-Leninist’ version of ‘socialism’ being propagated by the Rainbow Party as it is really a programme for state-run capitalism.